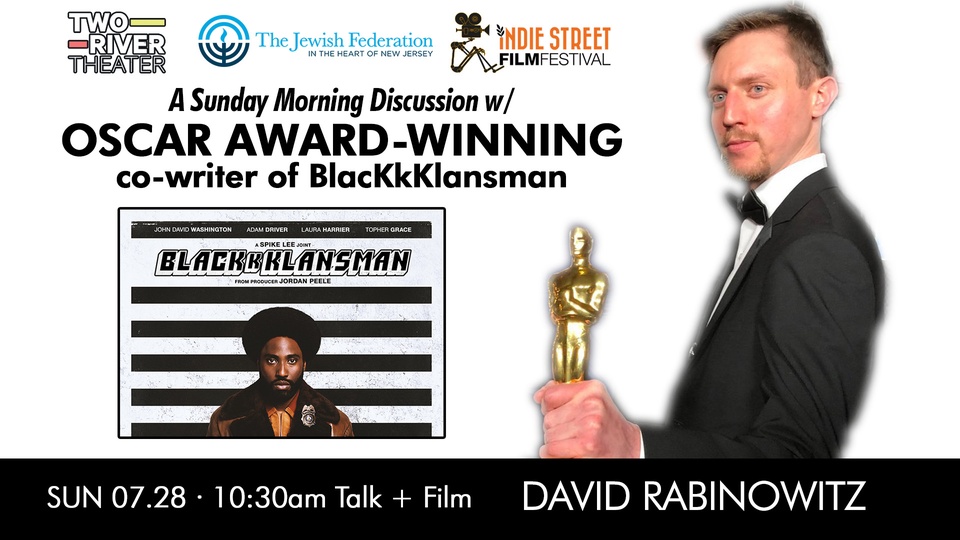 The Two River Theater in Red Bank will play host to a Sunday morning film talk on July 28 as a part of its festivities for the Indie Street Film Festival.

David Rabinowitz, a native to East Brunswick, but more importantly an Academy Award winning-writer, will lead the discussion in regard to the film that he wrote the screenplay and brought home the Oscar for, “BlacKKKlansman.”

“BlacKKKlansman” follows Ron Stallworth, the first black police officer in Colorado Springs, CO, who successfully manages to infiltrate the Ku Klux Klan using Flip Zimmerman, a fellow Jewish officer, as his spy on the inside. Based on a true story, “BlacKKKlansman” was written by Rabinowitz and his writing partner Charlie Wachtel, who won the Academy Award for Best Adapted Screenplay.

“Basically, Ron Stallworth gave us permission to adapt his memoir into a script on spec. So, the three of us – me, Charlie and Ron – worked together to develop a script,” Rabinowitz said. “We sent Ron every draft of the script and got feedback from him.”

During the process of writing the script, Wachtel, who had been working in the industry already, had made a connection with producer Shaun Redick, who was currently in the middle of producing “Get Out” with Jordan Peele. Redick passed the script onto Peele, who joined the production as a producer. With the success of “Get Out,” Peele was able to pass the script onto anyone and seeing as how he liked the story so much, he passed it on to the best person he could think of: Spike Lee.

Rabinowitz and Wachtel didn’t realize how much success they would have when first writing this script. Originally, Wachtel came across Stallworth’s memoir on his Facebook feed when he and Rabinowitz were looking for their next project. They immediately reached out to Stallworth’s publisher, who put them in touch with him and from there the two worked with Stallworth to get his story told.

“In the grand scheme of things, it happened very fast. At the same time, we did write the bulk of it in 2015 and parts of 2016, so it was a relatively long time ago when we were actually working on it. So, it does feel a bit weird to have all of this stuff happening now when we have worked on so many things since then. It does kind of feel like a long time ago,” Rabinowitz said.

But now, about four years after just beginning to write the script, Wachtel and Rabinowitz were awarded with the highest accolade you can receive in the industry on the night of Feb. 24.

Rabinowitz recalled the night of the event and how he wasn’t nervous beforehand, he was just looking forward to the entire experience. But his feelings eventually shifted once the moment was upon him.

Brie Larson and Samuel L. Jackson entered the stage to present the award for Best Adapted Screenplay and from the second Jackson opened the ballot card, Rabinowitz realized.

“From his immediate reaction, you just knew,” he said. “[Jackson] wouldn’t have that reaction for anyone other than Spike Lee. I think that I blacked out a little bit, standing up and getting to the stage. Then you are up there, and it’s a very surreal moment. I started having these images of what I was like up there. At first, I was right behind Spike, and then I was in the middle with Charlie. I was really just trying to listen to everything that Spike was saying because it was so hard to hear. Then before long, it was over. We were going back stage and I didn’t really know what hit me. I had my phone off during the ceremony and after it was over, I waited about an hour, then I was like ‘OK, I’m going to turn my phone on.’ Then it was just hundreds of texts and emails, and just Facebook messages and all of that. The way to describe it all is just a surreal experience.”

Since then, Rabinowitz and Wachtel have gone back to their normal everyday work. They are working on a few different projects out in Los Angeles, where they live and the two happen to host live panels and discussions frequently on the West Coast. Now, Rabinowitz is coming back to his home state, where he plans to do the same here.

“Charlie and I have done a few of these panels, Q/A’s, screenings in the LA area and its fun, but there’s a difference between doing it there and where you grew up,” Rabinowitz said. “First of all, I’m doing this thing because of my childhood experience and this is where I had my childhood experience, so it’s sort of coming full circle. It’s one thing to do it out in a place where I moved to, but it’s another thing to go back to Red Bank in particular. Red Bank is one of those towns with a really nice downtown area and it just feels like a center of culture for the area.”

Rabinowitz plans to stay with his family in his hometown of East Brunswick, where he looks to enjoy visiting family and friends who he hasn’t seen in a while. 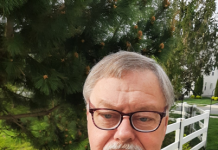