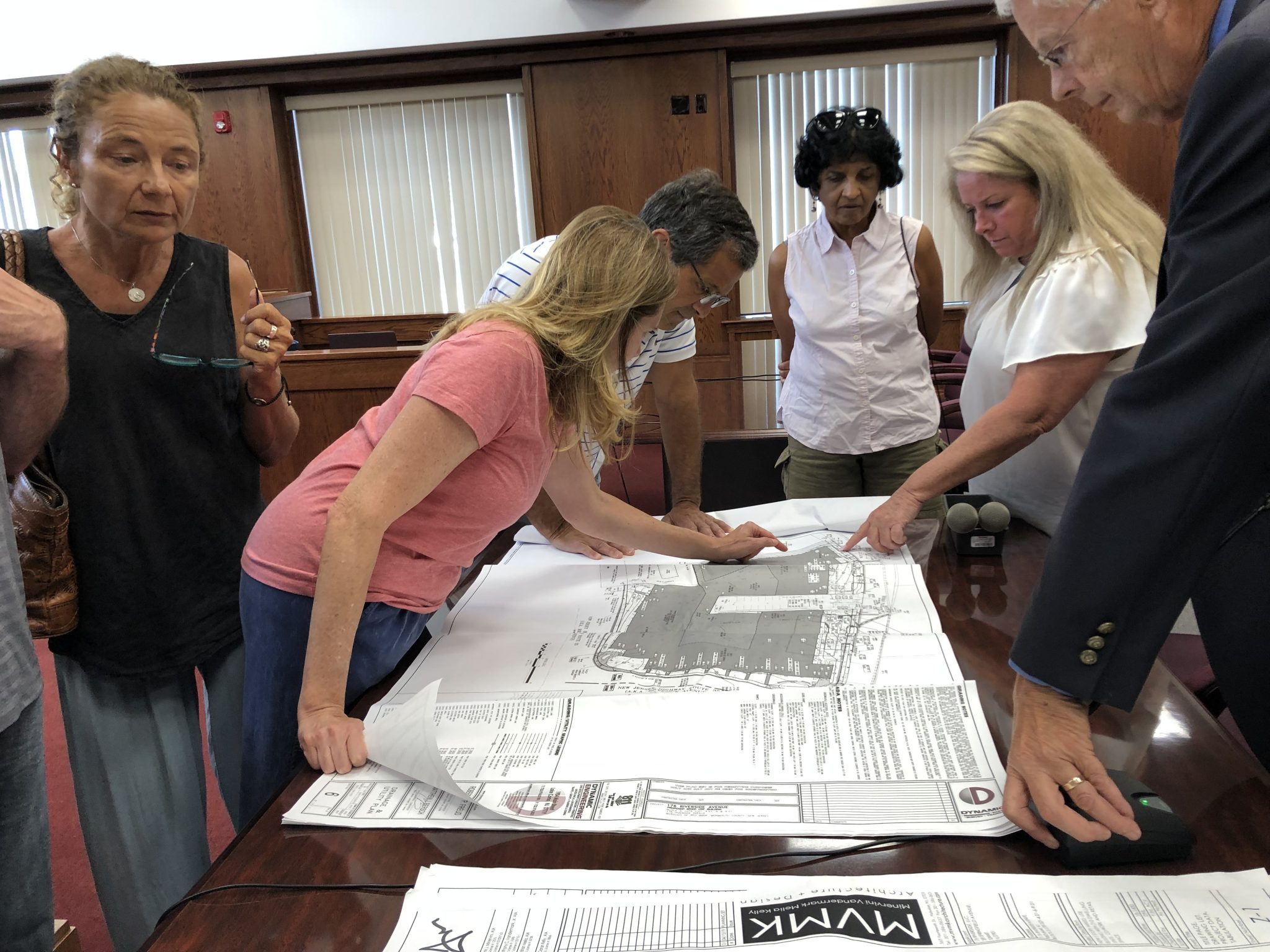 A developer has unveiled a plan to construct 210 apartments, retail space and co-working areas (shared workspace) at 176 Riverside Ave. in Red Bank.

The property is at the corner of Bodman Place.

Testimony on behalf of the applicant, 176 Riverside, LLC, was presented at the Red Bank Borough Planning Board’s July 15 meeting at Borough Hall.

The applicant is seeking preliminary and final major site plan approval to demolish the vacant Visiting Nurse Association building and a separate two-story structure. The 2.44-acre property would be converted into a five-story mixed-use space.

The proposed building would accommodate 210 apartments, 9,000 square feet of co-work space, retail food space and 326 parking spaces in a proposed attached parking garage, according to a legal notice which outlines the application.

The property is included in a redevelopment plan that was adopted by the Borough Council on Dec. 12, 2018.

Answering questions posed by attorney Chad Warnken, who represents the applicant, Robert Freud, a principal with Dynamic Engineering, presented details of the plan to board members and residents.

Three existing driveways that lead into the property and a two-story building would be removed during construction.

Access to the property would be provided by two new driveways. He said lobby areas for tenants would be on the north and south sides of the mixed-use building.

The site would include a new sidewalk around the perimeter of the property, a Jitney service to and from the train station, bicycle storage units, a 2,350-square-foot retail food space, 9,000 square feet of co-working space spread over two floors, a parking garage,  terrace areas, rain gardens and loading areas.

The car service to the train station and the rain gardens would contribute to credits for bonus density, Freud said. He said the Jitney car service would only be for residents.

Citing concerns outlined in board engineer Edward Hermann’s report which pertain to the application, Freud said, “There was a comment in regard to environmental considerations on the site and how the rain gardens would coincide with those (considerations).

“There is an environmental area delineated on the property through a Licensed Site Remediation Professional … everything that is designed here will be compliant … and the rain gardens will not have a negative impact on the ground water,” he said.

Hermann asked Freud how tenants would access the building and the parking garage, and about the nature of the proposed loading areas, trash collection and recycling, sewer easements, box trucks, and driveway egress and ingress routes.

Two driveways and four curb cuts – small ramps built into the curb of a sidewalk – are proposed at the property.

Residents were given the opportunity to ask Freud questions about his testimony and some people who live near the site expressed apprehension about the project. They cited possible additional congestion on adjacent roads, crowded housing, insufficient parking, and the use of on-street parking if the application was approved.

“I can’t tell you how many times, and I’m sure people can agree, when you make it out of Bodman onto Riverside and you don’t get killed. You say, ‘Phew, I made it.’ Am I right?” Eli said.

Audience members applauded her comment. The applicant’s representatives said Eli’s concern would be addressed at a future meeting when the applicant’s traffic engineer provides testimony.

Resident Margaret Marchese asked if Bodman Place would be widened to accommodate an increase in the number of vehicles using the road.

Freud said Bodman Place would not be widened as part of the application.

The applicant is requesting design waivers to allow parking in the front yard between the proposed building and Bodman Place and loading areas in the front yard on Bodman Place; and an exception from the Residential Site Improvement Standards to permit 326 parking stalls, which is 10 more than the number required by the redevelopment plan, according to the legal notice.

Testimony concerning the 176 Riverside, LLC, application is expected to continue at the board’s meeting at 7 p.m. on Aug. 5.