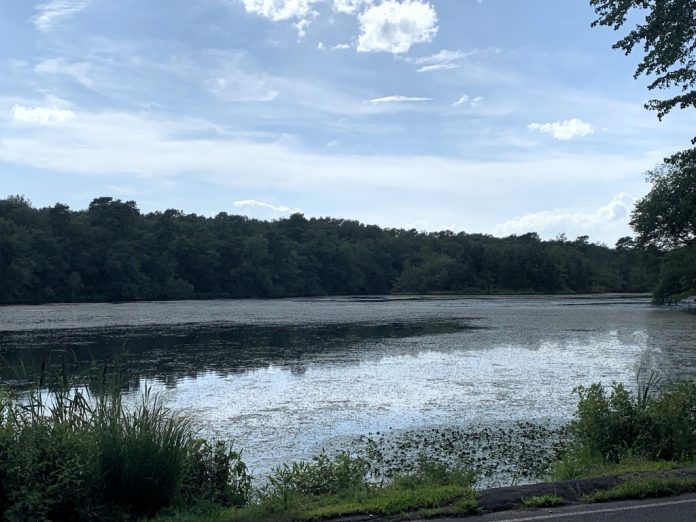 HOWELL – Dredging Lake Louise would cost Howell almost $5 million if municipal officials ever decide to pursue that course of action.

During the July 16 meeting of the Howell Township Council, resident Jeffrey Bassett spoke to members of the governing body about the lake, which is a 12-acre property on Lanes Pond Road.

“We bought a house on Lake Louise, which is such a beautiful place in Howell, and as the spring and summer began to come, all of a sudden we watched weeds growing up and up and up,” said Bassett, who owns a Chick-Fil-A restaurant on Route 9 in the township.

He said he researched the history of the lake and found that “at one point, Howell (officials) were looking at dredging Lake Louise. So I am here to ask if that is still a possibility.”

Jim Herrman, the director of community development, said municipal officials looked into the possibility of dredging the lake several years ago.

“The council (authorized) us to hire consultants, to go out and survey the lakes (around town), to determine how much material would need to be removed. We came back with preliminary numbers for Aldrich Lake and Lake Louise,” Herrman said.

Officials decided to dredge Aldrich Lake, which is at Addison Road. A project to dredge the lake and build a new recreation dock began in October 2017 and was completed in June 2018. The cost of the project was $2.4 million.

“Lake Louise was going to be almost $5 million to dredge,” Herrman said. “We picked the lake with more houses around it. There are 25 to 30 houses around Aldrich Lake that would be impacted, better access to the public, rather than Lake Louise. We had to make a decision because we could not afford to dredge both lakes.”

He acknowledged that problems at a lake worsen over time.

“They fill in more, they get more invasive species of plant life. Last year I proposed spraying the lake. I spoke with a few companies … trying to control some of the invasive (plant) species in the lake, and we received a price for $12,000 to treat the lake two times during the summer,” Herrman said.

He said members of the Lake Restoration and Wildlife Committee were not receptive to the idea of spraying the lake and want to see it dredged. Herrman said he agrees the lake needs to be dredged, but said it is a decision to spend $12,000 or $5 million.

“If $12,000 controls a problem, I think that was a more reasonable approach. However, the committee did not agree with me so we did not move forward … We were potentially looking to do it this year, but with the (municipal) budget passing rather late, we have not authorized anything at this time,” Herrman said.

Spraying Lake Louise would require Howell officials to obtain permits from the New Jersey Department of Environmental Protection and to hire an authorized consultant.

Mayor Theresa Berger said, “obviously, doing nothing” should not be an option.

According to the National Ocean Service of the National Oceanic and Atmospheric Administration, of the U.S. Department of Commerce, “Dredging is the removal of sediments and debris from the bottom of lakes, rivers, harbors and other water bodies.”

Dredging can be performed “to reduce the exposure of fish, wildlife and people to contaminants and to prevent the spread of contaminants to other areas of the water body,” according to the National Ocean Service website.