centraljersey.com
Home Time Off On the Scene 8/2: Ed Sheeran: A product of Jim Henson or...
Facebook
Twitter
Email
Print

Touring the world over the past two years, the musical genius that is Ed Sheeran somehow managed to fit starring in a feature film, as well as writing another album, into his busy schedule.

This past week, I finally got the opportunity to see the film “Yesterday,” which stars Himesh Patel, Lily James, Kate McKinnon and Sheeran.

When struggling musician Jack Malik (Patel) is hit by a bus during a worldwide blackout, he awakens to find the world’s greatest band, The Beatles, never existed. Realizing he remembers most of their music, he makes it his mission to become famous using everything the group had ever written as his own.

Eventually being discovered by the world-renowned musician Sheeran in his hometown of Suffolk, Malik goes from opening for Sheeran himself to becoming a worldwide sensation.

But I must admit, for myself, as much as I had found the concept for the film interesting, I don’t believe I ever would have found myself sitting in the theater actually viewing the film if it had not been for Sheeran’s role.

There are many things in this world I am well versed in, but there are two subjects that have never interested me in my 23 years on this Earth: cars and music.

In the last year, I have started to become more inclined to learn about the art of music, but it has started with classical – Gustav Mahler, Aaron Copland and, of course, Leonard Bernstein. But where I have started with the “classics,” I have not yet ventured to the world of ’60s pop, where The Beatles reside.

So, if it had not been for Sheeran’s role in the film and Chris Martin’s (the lead singer of Coldplay), who was originally chosen for the part, I don’t think I would have watched a film I found to be so fantastic.

But this week’s column is not about my thoughts on “Yesterday,” because the film has now been out for over a month and there is nothing I could say about it that hasn’t already been said. This week, I would like to highlight the genius that is the mop-headed, Muppet-looking, lyrical sensation that is Ed Sheeran.

As I said before, while touring the globe in its entirety for more than the past two years, Sheeran has found the time to star in a feature film, release a new album and get (secretly) married.

His latest release, “No. 6 Collaborations Project,” is not a traditional Ed Sheeran album, which at first made me a bit skeptical when listening. Filled with many modern musicians, whom before listening to the album I had never heard of, like Khalid, H.E.R., Chris Stapleton and Dave, I was perplexed at why Sheeran would go through such lengths to incorporate all of these artists until I realized how smart the man actually is.

There is at least one song for every type of listener on the album. From country to rap to electric dance music – you name it, it’s on the album. So, if you were not a fan of Sheeran’s, but were of someone such as Cardi B, he made sure to include a song with them to reach a broader audience.

Sheeran even made sure to include a song with Eminem and 50 Cent to appeal to listeners of rap who appreciate the artists of the genre.

A boy at the age of 20, who stood on street corners playing an acoustic guitar, eventually garnering fame throughout the entire world – there is a reason for it. If it is not my word you’ll believe, how about the words of his mentor, Elton John?

“Just the songwriting, for a start. He’s a really great songwriter. And not just for himself. He can write melodies so simply. I just think someone who can write something like ‘Thinking Out Loud’ – which Van Morrison would have been very proud to write, or I would have been proud to write – is a terrific songwriter. And you know you have to remember he’s still only 26 years old,” John said in an interview with Rolling Stone in May 2017.

Sheeran, now 28, was taken under the wing of John, who has taught him immensely throughout his short but transcendent career. John helped Sheeran get his career started and the two speak often as John offers advice to the young musician, who often reminds John of himself.

From street corners to becoming a household name in less than a decade, Sheeran is someone to be awed. It will be such an enjoyment to watch where the next decade will take him in his career. 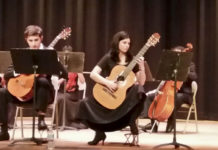