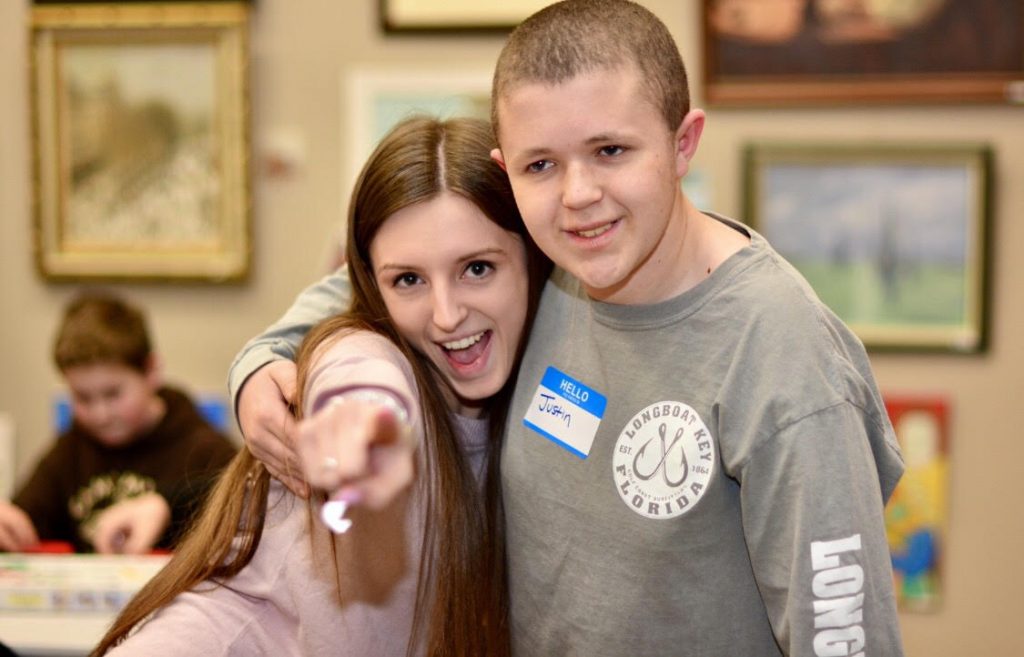 MIDDLETOWN – At 16, Sophia Ziajski had an idea. At 17, she founded an organization.

Sophia, a Middletown resident who is now 18, is the founder of Friends Connect Foundation, an organization that provides opportunities for individuals who have special needs to develop bonds with local peers.

The free programs that are offered by Friends Connect Foundation assist participants between the ages of 10 and 24 in strengthening their social skills, increasing self-esteem and promoting their sense of belonging within the community.

“People may be nervous when they see someone with special needs because they may feel like they are not the most qualified person to be hanging out with them. The more opportunities you have to get to know people with special needs, the more you find things in common with them,” Sophia said in an interview on July 30.

She said the nonprofit organization had its roots in humble beginnings.

“I had a lot of friends over the years who had special needs. I volunteered with other organizations that work with that population. I even learned sign language and would (teach sign language) in social skills classrooms in middle school,” Sophia said.

Upon entering high school, Sophia noticed that the number of social opportunities diminished for her friends who had special needs. She said her friend’s brother, who had autism and was often hospitalized, regularly missed school and opportunities to make friends after transitioning into high school.

“There wasn’t a big variety of programs for him,” said Sophia, who just graduated from the Monmouth County Academy of Allied Health & Science in Neptune.

She decided to arrange a social opportunity – a park outing for adolescents with and without special needs. The first gathering attracted 20 individuals, Sophia said, adding that participants ate pizza and took part in arts and crafts and music activities.

“We were just a group of 20 kids who would meet at the park,” Sophia said, adding that  photographs of the young people “dancing and playing”at the park spread on Facebook.

Shortly after that first event, Sophia said, “People from as far away as Newark were emailing me and asking what the program was and how they could get involved. So we made a little makeshift website and we put a name to the group. At the time, it was funded by myself.”

“We wanted to make sure we could start fundraising after we did a second event. We ended up having about 80 volunteers and participants … I did want more legitimacy,” Sophia said.

After a year spent unsuccessfully trying to gain sponsorships from various organizations, she said a lawyer was hired and “found a way to make it work” and Friends Connect Foundation came to fruition.

Programs that pertain to fitness, self-expression, music and community service are held each month at the Middletown Township Public Library. Events are held weekly during the summer. Students who have special needs are paired with “buddies” based on shared interests.

“We tell the volunteers to treat the kids as people first,” Sophia said. “We make sure (volunteers) understand different ways to get to know their buddy.”

The majority of participants match with volunteers from their schools, Sophia said, adding, “it’s really special” that some participants began eating lunch with their buddy in the school cafeteria.

She said about 20 individuals – 10 volunteers and 10 individuals who have special needs – attend each event. Sophia said the organization’s database includes a significant number of registered participants.

Sophia, who serves as the organization’s executive director and program director, said the organization that primarily serves Monmouth County is available to residents from outside the county and New Jersey.

Sophia said she needed assistance transitioning her grassroots effort into a 501(c)(3) nonprofit organization and said, “I tried to be as independent as I could.”

Asked how she, as an adolescent, established such an organization, Sophia said, “It’s all about the kids, so I started with the parents. I asked (parents), ‘what (types of programs) are you looking for that aren’t there and what can we do?’ They would tell me about the different ideas they wanted. I would then ask local professionals about it. We have different instructors who partner with us from other organizations.

“As for starting the nonprofit itself, my parents were big supporters and would advise me on owning a small business. Our lawyer would refer us to accountants … Doing fundraisers (attracted) people who wanted to help (the organization thrive). Parents and our Board of Directors … were a backbone in helping, too.”

Even the educators at her high school offered the young entrepreneur advice, Sophia said. She added, “it was amazing the way the community came together” to plan programs and to advertise the organization on social media.

“Everyone deserves a chance at friendship,” Sophia said. “If you take the time to get to know somebody, you’ll find that you have a lot more in common with them than you initially thought … Acceptance from society comes from having a personal understanding of what’s going on.”

Sophia said if it were not for that first social gathering at a local park, the Friends Connect Foundation would not have been formed.

In an interview, Jodi Frunzi of Middletown said her 19-year-old son, Michael, has been a participant in the program since its inception.

Frunzi said Michael, who has Phelan-McDermid Syndrome and autism, participates in most of the organization’s events. He has gained confidence and social skills as a result, she said.

Phelan-McDermid Syndrome is a rare genetic condition caused by a deletion or other structural change of the terminal end of chromosome 22.

“Michael has known Sophia since fifth grade and he is one of the participants (Sophia) started the program for. We used to tell (Sophia) there was really (no events) outside of school for him to be with typical peers,” Frunzi said.

Frunzi said Michael “literally jumps out of the car” when he arrives at an event. An activity such as woodworking is a great mental exercise for her son because it allows him to think critically and accomplish a goal more so than drawing a picture, she said.

“I think he knows he is always going to see the same people and it’s good to develop relationships like that,” Frunzi said. “Before, (Michael) would just see people out in the community like at the food store and just pass by (them). He feels comfortable when he sees people more than once. It helps him relax.”

Shari Gagliardo of of Fair Haven said her 12-year-old son, Maxx, who has autism, is a recent participant in the organization’s programs.

“It’s difficult for (children on the spectrum) to find other children to socialize with at that age,” Gagliardo said. “There are a lot of (activities) for little kids and as they get older, (the kids) want something more organic where they are participating and not just sitting in circles playing board games.”

Gagliardo said Maxx enjoyed a recent program at the Middletown library during which participants read books to rabbits that were from a local 4-H club.

“It was interesting because the kids got to act with the bunny owners. (Maxx) would ask what they eat and how they were raised. My son just loves animals,” she said. “It has been a great experience so far.”

She said Maxx looks forward to the events where he can engage with kids “like him.”

As for Sophia, Gagliardo described the young woman as “absolutely awesome.”