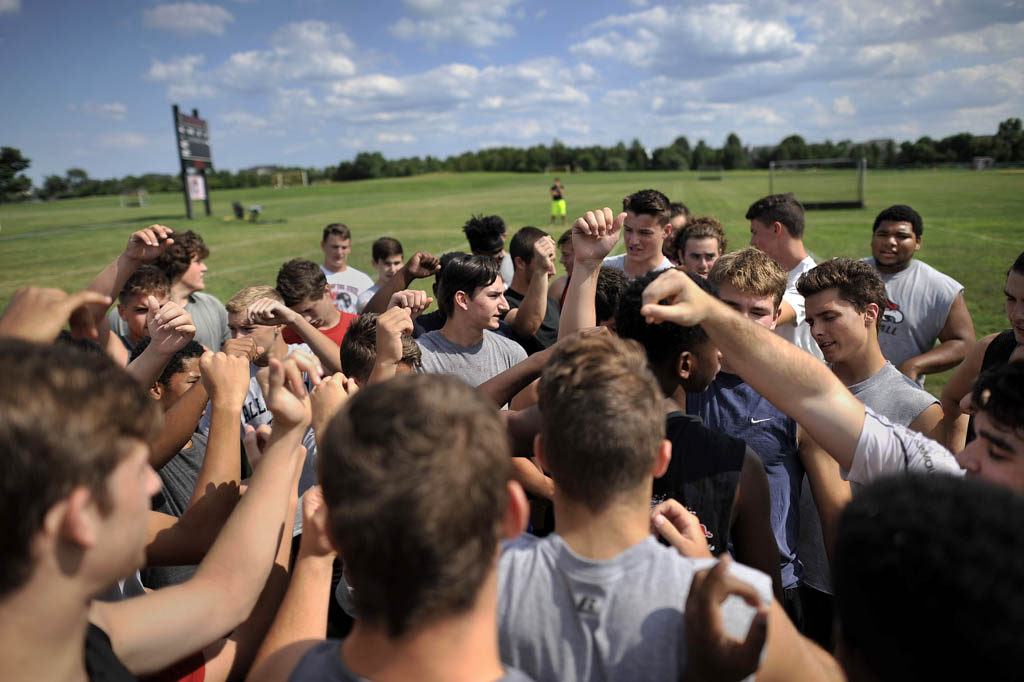 Andrew Lachenmayer knows how to motivate athletes to find that extra gear at a moment of weakness.

He has done it over and over again as a spring track and field coach at Allentown High School.

And he wants to do the same thing with the school’s football players. During practices and lifts this offseason, Lachenmayer keeps repeating the same simple word: “Finish.”

The new football coach, who took over for Graber in April, wants the Redbirds to play better in second halves and fourth quarters this fall. He also wants them to get better as the season goes on.

In 2018, Allentown started 3-0 but went just 1-5 in its last six games, including a 30-13 loss to Red Bank Regional High School in the NJSIAA Central Jersey, Group 3 sectional playoff first round. The stretch also included a three-point loss to Lenape High School and a two-point setback to Nottingham High School.

Allentown was a couple good second halves away from a much better season. That’s why Lachenmayer is repeating his straightforward mantra.

“We always emphasize conditioning, so we’re not really running more,” said Lachenmayer, who coached the lines under Graber from 2012-2018. “We’re just emphasizing finishing everything we do.”

Quarterback Dan Merkel was an electric playmaker with his arm and legs. Wide receiver Chris McCrea averaged 24.5 yards per catch and scored five touchdowns. And Allentown’s offensive line paved the way for a running game that racked up 2,039 yards and 23 touchdowns.

All three of those elements, Merkel, McCrea and three starters on the offensive line, are back for 2019. The three offensive line starters are center R.J. Franzen and tackles Aidan Benjamin and Steven Lally.

But it will all start with Merkel, who is already a third-year starter as a junior.

“He’s a great dual threat guy who can read defenses now,” Lachenmayer said. “The sky is the limit for Dan.”

Lachenmayer knows defenses will key on Merkel, and he is planning on running play action to take some pressure off his quarterback. But that’s hardly a secret. Every team uses play action. The question is, which back will take the pressure off Merkel?

Allentown lost running back Rahsaan Emory, who rushed for 1,048 yards and 15 touchdowns last fall, to graduation in June. Replacing him will be the biggest key for Allentown’s offense.

Lachenmayer wants to do it by committee with two solid backs, Ramsey Ben Flah and Jake Searing.

“Ramsey is a playmaker and Jake is a very good lacrosse player,” Lachenmayer said. “He’s shifty.”

The Redbirds’ other big question mark is their defense, where 10 of 11 starters graduated after last season. This year’s team has a big senior class of players who have spent their careers on special teams, and they are eager for an opportunity on defense this fall.

Lachenmayer hired Tom Daly, who coached at Bishop McDevitt High School in the Philadelphia area the past two years, as his new defensive coordinator. Daly plans to run an aggressive 3-5 unit at Allentown.

“The seniors have put the blood, sweat and tears in and they are hungry,” Lachenmayer said. “And we want to put pressure on people.”

Allentown will open padded practices on Aug. 12. One word will be on the players’ minds.