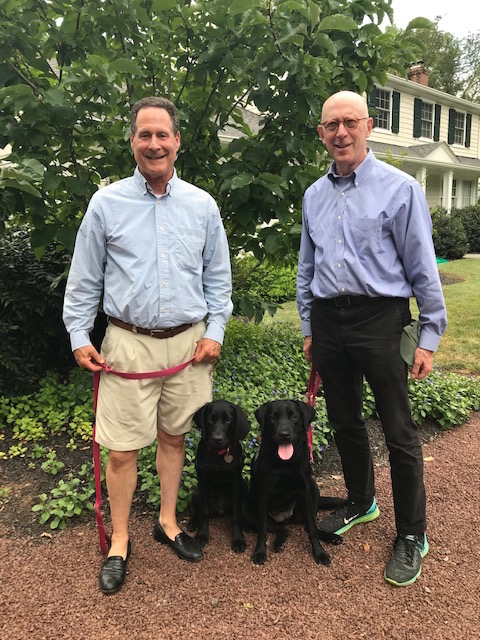 On a Tuesday afternoon several months ago, Princeton resident Ira Fuchs scheduled an emergency computer video conference after dinner with his three grown children to discuss a new development in the family dynamic.  He reassured them the reason for the hastily called meeting involved no health emergency and gave no other details.

Once everyone was signed on, he announced the following: 1) He had fallen in love; 2) The affair had been going on for more than a year; and 3) He couldn’t be happier. His oldest daughter, Juliana – familiar with her father’s sense of humor – retorted her dad’s love object “better be a four-legged creature.”

And indeed, with a lot of insight, she correctly saw through her dad’s staged announcement of the fact the family obtained a dog. But what she couldn’t see initially was how special Penny was going to be for her dad and everyone in the family. Penny is a certified Seeing Eye dog.

The Seeing Eye mission is to enhance the independence, dignity and self-confidence of people who are blind, through the use of specially trained Seeing Eye dogs.

Based in Morristown, The Seeing Eye philanthropic organization breeds and raises puppies to become Seeing Eye dogs. The nonprofit organization trains the dogs to guide blind people, instructs blind people in the proper use, handling and care of the dogs, and conducts and supports research on canine health and development.

Before serving officially as a Seeing Eye puppy-raisers, Ira and his wife, Karen, spent a year and a half attending the necessary meetings and learning the training, while keeping it a secret from their children – a tough feat because all of them are “dog crazy,” Ira said.

A former vice president for computing and information technology at Princeton University and the co-founder of BITNET, a precursor to the Internet, Ira became connected non-virtually to The Seeing Eye mission through another local resident, Bob Denby, a marketing and trade show production executive and longtime Seeing Eye aficionado. A few years ago, Ira saw Bob with his Seeing Eye dog-in-training on Princeton University’s campus.

“We started talking about the dog and our families. It turned out that my wife, Karen, knew his wife, Kate. The more I learned about Seeing Eye from Bob, the more impressed I was,” said Ira, who felt compelled to become involved.

Sharing a love of dogs and a community service passion, Bob and Ira have become good friends – so much so that Bob nominated Ira to the board of The Seeing Eye, which just last week announced Ira Fuchs as its newest board member.

Bob has been involved with The Seeing Eye organization for more than a dozen years. He is now training Shadow, a black lab, who is the same breed as his family dog, RG, a permanent member of the Denby family.

“We acquired RG when she failed to make it as a Seeing Eye dog. She developed a twitch and Seeing Eye dogs have to be perfect. One-third of the dogs in the Seeing Eye training program fail to make the grade and go on to other successful careers as law enforcement/security dogs or family dogs. We couldn’t bear parting with RG, so we didn’t. RG became our family dog – a great career choice from our perspective,” said Bob, who noted the process of becoming a volunteer puppy raiser is intense and requires commitment.

The Seeing Eye breeds its own German shepherds, Labrador Retrievers, Golden Retrievers and Labrador Golden crosses. When the puppy is about 8 weeks old, it’s placed in the home of a volunteer puppy raiser, where it’s taught basic obedience and socialization, and given lots of love. When it’s about 1 year old, the dog returns to The Seeing Eye and begins a four-month course of training with a sighted instructor. When the dog passes this phase, it’s matched with a blind person and they train together, under the supervision of a sighted instructor.

I caught up with Bob and Ira – and Seeing Eye dog Penny – when Bob and Ira were drinking coffee at Princeton’s Small World Coffee, a noisy, bustling environment. I never even noticed Penny, until Ira pointed out – the big black Lab resting placidly under the table.

“That’s the whole idea – the dogs are supposed to be invisible and temperamentally unflappable. Our job as puppy raisers is to expose the dogs to all sorts of social situations and environments,” Ira said.

One of their Seeing Eye colleagues takes his dog every day to New York by train and then on the subway in NYC, where the dog is exposed to shrill sounds and grunts from the equipment and some of the passengers.

“People ask us all the time: ‘How can you give up the dog?’ Sure we love them, sure it is hard when they leave, but we know that the beloved animals are going on to pursue a very important function in the world – helping others,” Ira said.

He and Bob love telling stories of where the dogs go and what they are doing after the “puppy-raising” phase of their lives. Bob is particularly proud of Ruffles, who was under Bob’s care a few years ago and is now the partner of a PhD music student in Boston.

Watching the gorgeous black Lab Penny lie next to Ira with a very calm awareness of her surroundings, I kept wondering how I could adapt a few of the Seeing Eye techniques for controlling my wild and crazy grandchildren.

Established in 1929, The Seeing Eye provides specially bred and trained dogs to guide people who are blind. Seeing Eye dog users experience greatly enhanced mobility and independence, allowing them to retain their active lifestyles despite blindness. The Seeing Eye is a 501(c)3 nonprofit supported by contributions from individuals, corporations and foundations, bequests and other planned gifts. For more information, call 973-539-4425, or email info@SeeingEye.org.