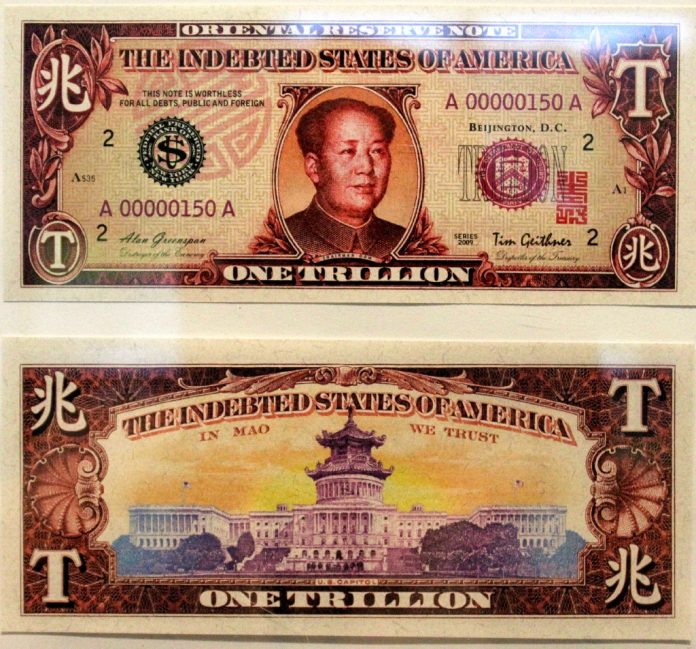 Artist Stephen Barnwell could spend hours looking through 19th century books and periodicals, but the Passaic resident is not interested in the stories.

Rather, the artist is searching for the perfect image to complement or complete the false currency he methodically produces.

Barnwell, who calls the fake money he creates “moneyart,” aesthetically offers an insurgent mindset toward politics and international events. Carefully searching books to find suitable elements for his false currency is only part of his process.

“Moneyart is the perfect genre for political satire, only governments are allowed to create money, so I am stealing the voice of power to criticize power,” Barnwell said in an interview on Aug. 6. “If I need a certain element, I sometimes have to go through hundreds of books looking for the (desired element).”

Barnwell’s art exhibition, “Capital Offenses,” is being showcased at the Monmouth Museum on the campus of Brookdale Community College, Newman Springs Road, Lincroft, in an exhibit that opened on Aug. 9 and will run through Sept. 8.

The New Jersey Emerging Artists Series consists of six annual solo exhibitions that highlight the work of New Jersey artists. The artists chosen to participate in the series represent the diversity of talent that is seen throughout the state, according to the museum.

“A lot of people think (moneyart) is just collage and photoshop, which is easy,” Barnwell said. “But it’s not (easy), not the way I do it. (Each element) has to blend so perfectly.”

Barnwell produced the images from 2003-18. He said his moneyart prints are “like a short history lesson.” The digital prints are a reaction to events that took place around the world, he said.

“You can see works referencing the Gulf Wars, the Sept. 11 attacks, the War on Terror, Occupy Wall Street, the Syrian gas attacks, Monsanto, the Obama administration, various financial bailouts, U.S. debt to China, and more. I started creating political art after Sept. 11. I used my art to deal with and process the tragic attacks.

“… I used my art to express my feelings about that terrible day. My father worked at the World Trade Center. He was there during the 1993 bombing and was still working there on 9/11. He wasn’t there (on Sept. 11), but I didn’t know that at the time … Afterward, I was motivated to research modern world history and continue to comment on world events for over a decade afterward,” Barnwell said.

Barnwell said the complex process of creating a single false currency includes finding and scanning very specific images from books, drawing elements such as titles, and combining the two in photoshop.

The result is an image that is hundreds of layers deep, Barnwell said, adding that he scans images from books into his computer at a high resolution, cuts them out digitally and “cleans them up” if they are in inadequate condition for his art.

For example, Barnwell’s work “Divided States of America” depicts a split certificate with a torn American flag at the center. On the left side of the certificate is a donkey head and on the right side is an elephant head.

The animal heads, which have been placed on human bodies dressed in suits, represent the Democratic and Republican parties and the division that exists between them.

Barnwell said he scoured his collection of books for the perfect images of donkey and elephant heads that would best represent his message.

After searching unsuccessfully for several days, Barnwell finally found and ordered a special print of an elephant’s head from Ebay.

“I very often preconceive what the elements of a piece should look like,” the artist said. “It’s not totally random what I find in books. I am looking for something specific. I had to find just the right human body that matches a suit, that also matches the style of the engraving, that also matches the line work and the lighting from different angles.”

From a distance, some of Barnwell’s art replicates legitimate currency, until one takes a closer look and notices titles such as “Federal Debt Coupon” or Barnwell’s $1 trillion U.S. bill with Oriental elements.

“I took the name for this show from the first book of my moneyart, which is art that looks like money; it is the genre of art in which the artist appropriates the visual vocabulary of currency and stock certificates,” Barnwell said.

“I use moneyart for the purposes of political satire and social commentary … Plus, so many political issues are driven by money and greed that the financial visual language I use is quite appropriate. The style is part of the message.

“… My first foray into moneyart, in 1999, was a large fantasy project about a utopian colony on the continent of Antarctica, called Antarctica Dream-Dollars.

“… In 2003, I created my first political moneyart print in response to the Gulf Wars and continued from then on. These works have almost entirely been my reactions to the geopolitical events of the time period in which they were created. Once I discovered the fun of deconstructing national symbols and doing political satire, I was hooked,” Barnwell said.

Barnwell, who calls himself a “relentless artist,” routinely experiments with different mediums, such as photography, and diverse subject matter such as science fiction and fantasy.

“I get bored easily,” he said. “I have worked in photography, filmmaking, drawing, illustration, mixed media, printmaking, collage and most recently, book publishing. I think my favorite medium has become my collage work with Victorian engravings. This is the technique I used in my moneyart.

“My collage work, always with engravings, dates back to 1982, using traditional cut and paste with scissors and glue. Today, I use photoshop to create large, complex collages.

“With collage, I enjoy the serendipity of finding different elements to compose together. For me, there is an aspect of Dada-ism in the pleasure of surprising juxtapositions and unexpected discoveries. I love the look of the finished work. I love the decorative elements, such as borders and seals, as well as the rich and complex visual textures they create in being layered together,” the artist said.

Barnwell said his favorite piece in the exhibit is “Dread and Circuses,” which depicts George Washington altered to be dressed as a clown.

“(‘Dread and Circuses’) is the most recent print and that might have something to do with my liking it more. For me, this piece really has hit on a zeitgeist of the moment. It was done last year and is a comment on our current political climate: it’s a circus.

“(‘Dread and Circuses’) is an iconic image and very timeless. I think it will still have power 20 or even 50 years from now. Plus, it is very timely, making a comment on today’s politics that resonates with a lot of people. This print also is part of a new direction I’m taking, where I am working larger and evolving my style in my gallery work.

“(‘Dread and Circuses’) is still political and social commentary, and still uses the engraving collage technique, but I am discarding most of the moneyart trappings, and making more pure, simpler images.The moneyart dominated my life as an artist for over 15 years. I am moving on and need to make a change in my work.

“I still want to make work that comments on society, but I need to try new things and new styles. This exhibition is important to me as a major retrospective of this very critical period in my career as an artist … A true artist can’t keep making the same statements and exploring the same themes,” Barnwell said.

Catherine Clark, the arts and fund development manager at the Monmouth Museum, has said Barnwell’s artwork “takes you out of your comfort zone.”

“What is especially unique about Stephen Barnwell’s artwork is that it is not what it originally appears to be. You need to explore each piece up close and make a commitment of time to investigate the details and what the visual dialogue actually is.

“The twist is that once you think you know exactly what he is saying with his work, you then discover an element which conveys that the intent could be the complete opposite of what you deduced,” Clark said.