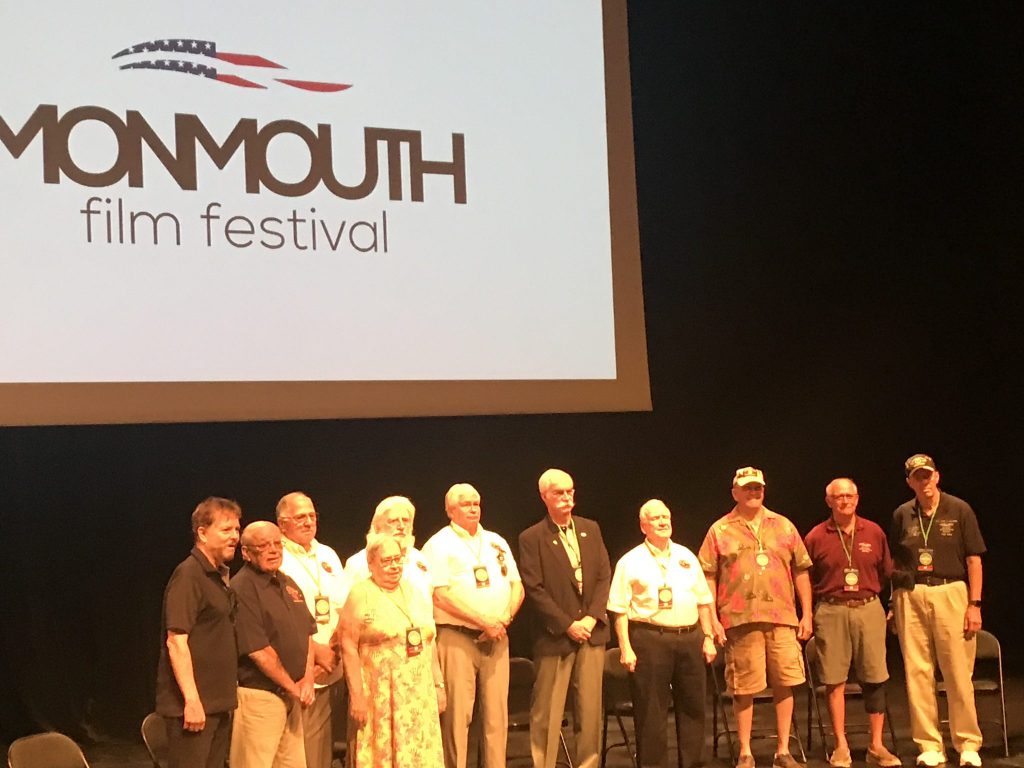 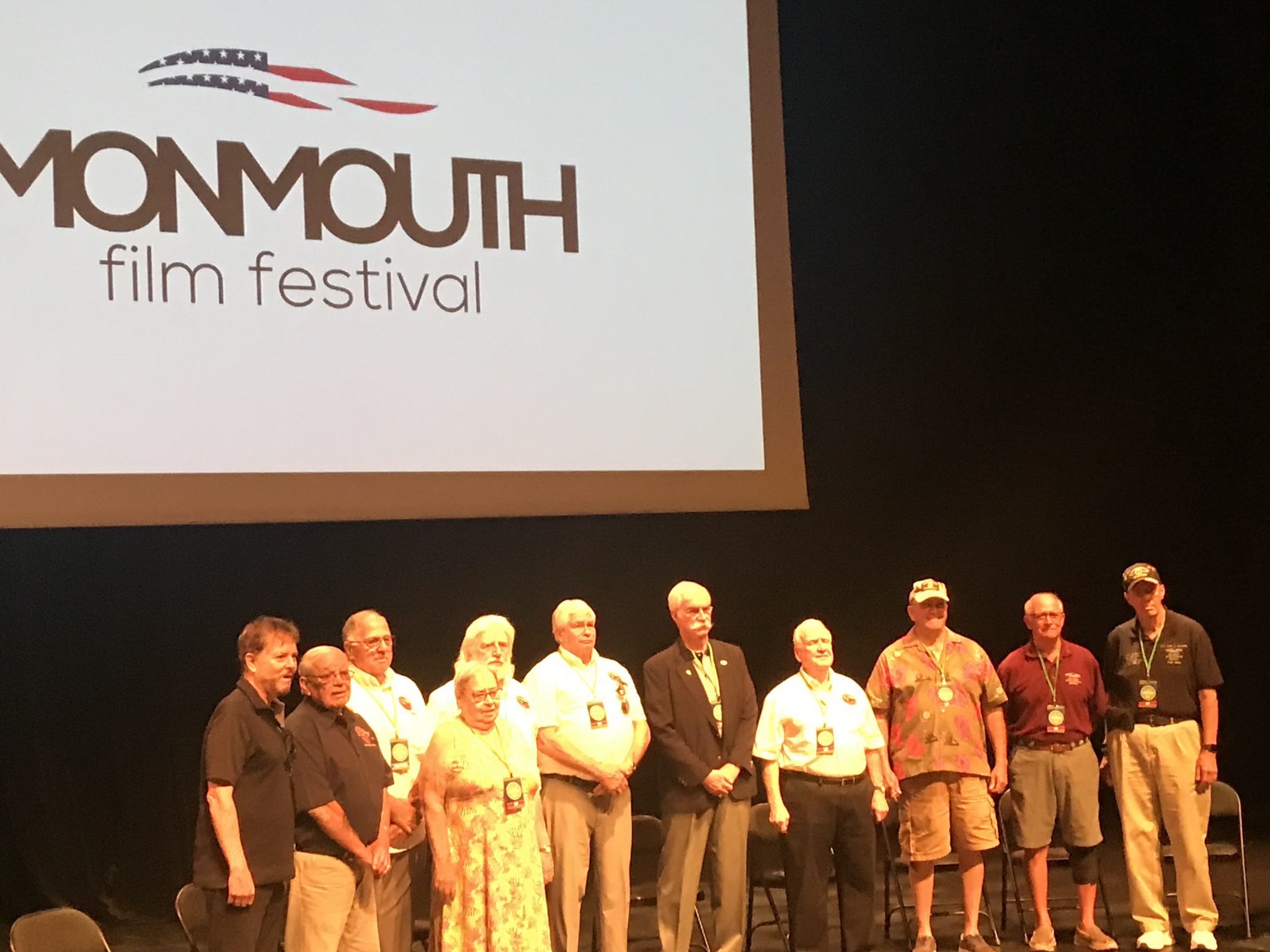 Both pieces of work followed Vietnam War veterans who are involved at the New Jersey Vietnam Veterans Memorial in Holmdel.

“My father was a vet, he died young; he never spoke to me,” Phillips said. “He died and there was a big space there, but these vets talked to me. There was a gap that was in me, but these guys reminded me of my father. These guys are all respectful and dignified; they made me a part of the family. I feel at home with them.”

Phillips originally came to know each of the men in his films after some time volunteering at the memorial. Bill McClung, who was an Army medic during Vietnam, asked Phillips to interview some of the veterans around to get their stories.

“He offered to pay me. I told him, ‘I never served, but my father served – I am not taking your money,’” he said. “So, I did about 37 interviews here, and they were tough interviews. I ended up going to a bar after and downing a few shots because these horror stories – what these men went through – were unbelievable. Having no money, I did the best that I could until a friend came along and gave me the funding to buy the Vietnam War footage that I needed to fill it out. I didn’t know what to do with it, but I gave these guys my word that I would.”

Eventually, looking at what he had to work with, Phillips came up with two separate projects to work toward. “Vietnam Aftermath,” which would follow four Vietnam veterans and how each of their lives were affected traumatically following the war; and “Unclaimed Remains,” which follows Vietnam veterans Richie Gough and Ernie Diorio in their mission to return unclaimed veteran remains to their families.

In talking with Gough and Diorio, Phillips discovered that the two had been working on a project of their own after they had discovered that funeral homes across the country had boxes of cremated ashes of unknown individuals. Whether children, veterans or even elderly citizens, remains of people were just being left on shelves without families ever finding out what had happened.

“People left in boxes? This is America and we have people left in boxes in funeral homes,” Phillips said. “I was with [Gough] and [Diorio] and I saw infants left in boxes. This is a story that needs to be told, it needs to be something that people are aware of. Funeral homes need to let these guys in. We need these doors to open. I hope that the public watches [this] and sees what’s going on and the effort that these guys put in and see the human need to right a wrong.”

For each individual’s remains that the two find, Gough and Diorio go through about 12 hours of research time and about three months to identify the cremated ashes and tell their stories.

“As part of the project that we do, to identify an individual who is left on a shelf, originally we don’t know if they are veterans or not. So, there’s a process that we use to determine if they are or not,” Gough said. “The first process is that once we identify where they live, we’ll go back in newspaper articles to when they were 16 or 17 years old, that’s our starting point. Then through newspaper articles, we’ll follow that individual right up until they die. By the time we are finished identifying if that individual is a veteran, we pretty much know their life story. When we bury an individual, we are not just burying someone who was a veteran, but it’s almost as if we know them. We have gained a bond with them because he is a veteran.”

Through Gough and Diorio’s work, the two have also worked with different groups in the state who help their cause by giving them financial aid and well as goods to help the process of properly burying the remains.

“We work with different organizations like Home Depot,” Diorio said. “Home Depot gives us a grant, and with that grant, we have another organization – Covered Bridge in Manalapan – that has a great workshop that builds the urns for us as we need them. With the grant from Home Depot for all of the lumber and the Covered Bridge, we were able to knock the cost down to only about $40 per person – between certified letters and death certificates.”

In the last three years, Gough and Diorio have buried about 70 veterans and/or their partners.

“We bury the spouses, too,” Diorio explained. “We have found that there are spouses left in the funeral parlor as well. We have done World War I, World War II, Korea, Vietnam and the Cold War. We have covered everything. We returned [the remains] to families that didn’t even realize they were sitting on a shelf of approximately 20 people.”

For Phillips, it took about two years to get the stories of Gough and Diorio and properly put it together in a format that he was comfortable with.

“Since this was close and personal to me, the pressure was on. I had no executive producer above me. … I was on my own. Since it was so close to me, I wanted to make sure that I did the right thing,” Phillips said.

In turn the veterans, who are all members of the Vietnam Veterans of NJ Jersey Shore Area Chapter 12 branch, honored him as one of their own.

“These guys are like brothers and fathers – I feel like I have known them all of my life. I just like how they have accepted me even though I had not served myself. They made me a member of their chapter – an honorary member,” Phillips said. “I’m so honored. I have [the plaque] hanging in my house, right next to my dad’s.”