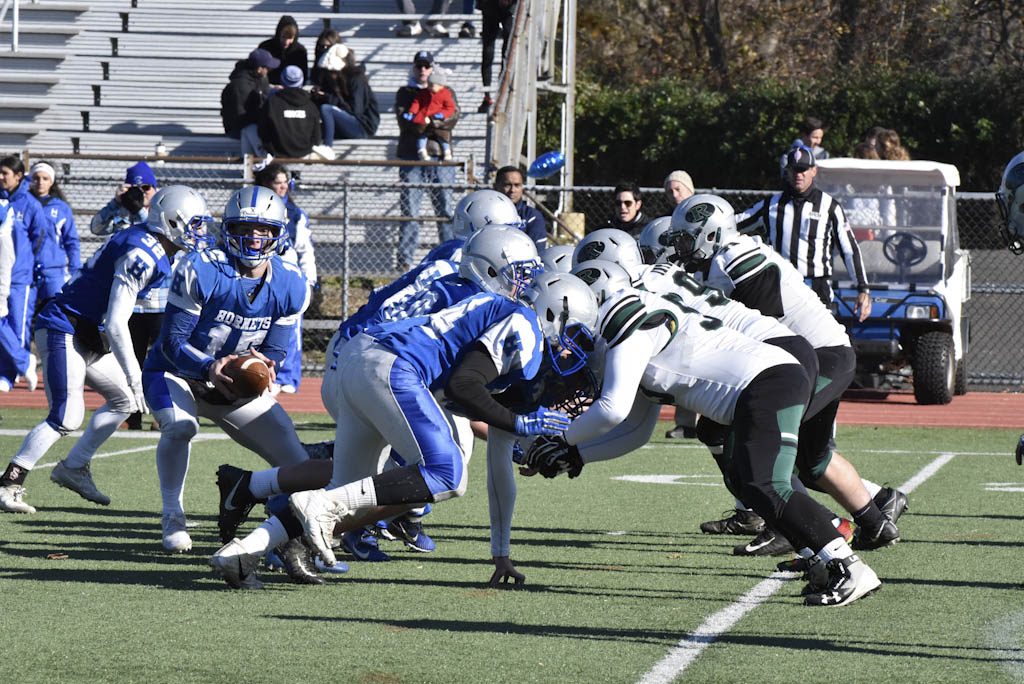 In 2016, Jeff Rainess took over what he described as a “downtrodden” Holmdel High School football program.

The Hornets had no accountability culture in their weight room or on their practice field.

But over their first three years, Rainess and a group of committed players implemented that culture.

Everything came together, but then 21 seniors graduated in the spring of 2019. The same seniors who, in 2016, transformed the Hornets when they took over starting jobs as sophomores.

So going into 2019, the Hornets face a new challenge. Rainess is still the coach, but his players are mostly different. They did, however, grow up in the Holmdel program watching last year’s seniors hold each other accountable, and then win games on the field.

Rainess is hoping that that culture rubbed off on his new key players. The Hornets started practicing in pads on Aug. 12, and they are staying on each other to finish drills, walkthroughs and live sessions.

They look like they will be able to carry on the legacy of their predecessors.

Holmdel will open its regular season on Sept. 13 at Shore Regional High School. Kickoff is scheduled for 7 p.m. in West Long Branch.

“We look at this as an important year to see if we can continue our culture,” Rainess said. “It has continued so far.”

“These guys understand you can’t always feel perfect,” Rainess added. “Sometimes you just have to work through it and go practice.”

Culture is great. But it only gets you so far, and then talent takes over.

Luckily, despite all the graduations, the Hornets have a fair amount of talent back from last year.

Offensively, senior quarterback John Tomasulo started at wideout last year. He is a dual threat athlete and a point guard on Holmdel’s boys’ basketball team. He will have to play the same role in the Hornets’ triple option offense.

“John has the ability to distribute the ball,” Rainess said.

Tomasulo will have two experienced running backs behind him to take the pressure off. Cameron Lamountain rushed for 745 yards and six touchdowns last year, and he averaged more than eight yards per carry. Behind him, Thomas Ammiratti rushed for 229 yards and scored one touchdown.

Both are back for 2019. Among Tomasulo, Lamountain and Ammiratti, all seniors, Holmdel will have three dynamic runners for its triple option attack.

“Cam is a big piece,” Rainess said. “And Tommy is an explosive kid who’s ready for his chance.”

Defensively, the Hornets have impact players back at every level.

Senior end Quinn Pavlinetz is a 6-2, 220-pound pass rusher and edge setter. Senior linebackers Joe D’Acunto and Nick Bauman are fast, physical “downhill type kids,” Rainess said. And senior twin brothers Ryan and Evan Jennings can play any secondary position because they can cover, tackle and take away the football.

They are essential to Holmdel’s 4-2-5 defense, which relies on linebacker-secondary hybrids to run around and make plays.

“They are good,” Rainess said.

So is Holmdel, and Rainess is “cautiously optimistic” that the Hornets can stay good in 2019.

“If we can solve the inexperience thing early in the season, we’ll have a chance,” he said. “But we’re going to need our senior leadership to step up and help us win close games.”