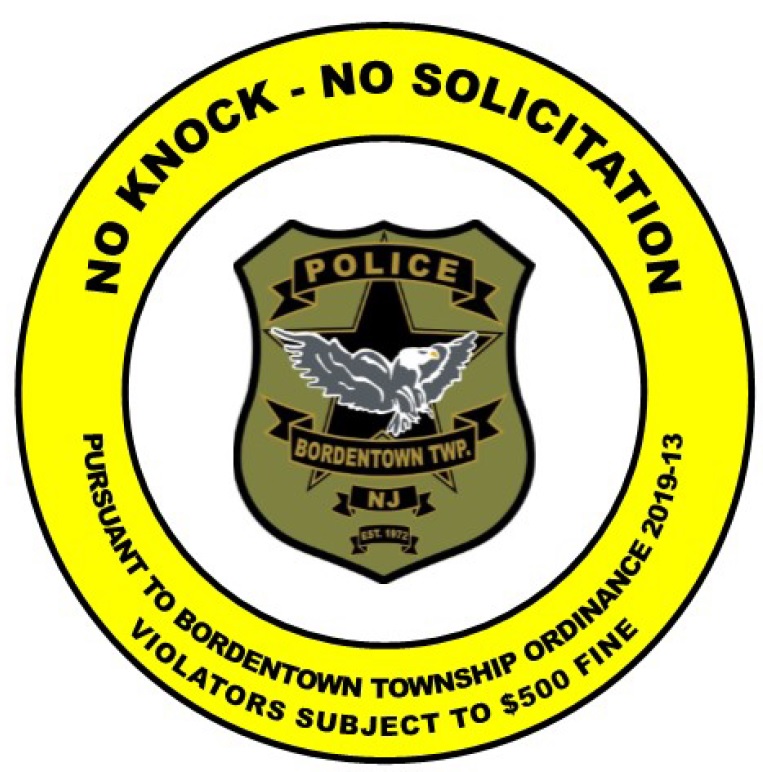 Municipal officials have taken an initiative to stymie peddlers and solicitors from disturbing Bordentown Township residents with the introduction of “no knock” stickers for homeowners.

Township officials announced the new initiative on Aug. 27, when they explained that the stickers are available to residents, which are aimed to discourage door-to-door salespeople and solicitors from interrupting homeowners.

Officials from the Bordentown Township Police Department said the motive for the “no knock” stickers arose from frequent homeowner complaints about salespeople and advocates conducting alleged business practices, which displeased residents.

“Bordentown Township regularly responds to complaints regarding door-to-door solicitors and realizes that these uninvited guests can be an annoyance to many and negatively impact our quality of life,” officials from the Bordentown Township Police Department announced in a statement. “With that in mind, the Township will now provide official ‘no knock’ front door stickers that are codified by ordinance.”

The implantation of these stickers came off the heels of recent legislation from the Bordentown Township Committee who adopted an ordinance that set new rules and regulations for peddlers/solicitors – Ordinance 2019-13.

The ordinance allows residents to now display an official “no knock” sticker supplied for free by the Bordentown Township Police Department and Township Clerk’s office.

“In an attempt to allow residents to be free from door-to-door solicitations, residents may elect to display prominently on their outer most front doors an official ‘no knock’ sticker issued by the Bordentown Township Police Department that signifies that the residents do not wish to be disturbed,” the ordinance reads.

Township officials said no licensed or unlicensed peddler, solicitor or canvasser shall knock on the door or ring the doorbell of any residence with the sticker. At the time a license is issued for a salesperson to conduct their business practice in the township, officials said the individual is provided a sample of the sticker and a copy of the ordinance.

Peddling, soliciting or canvassing or any activities of this nature conducted at a property with the “no knock” sticker posted is subject to a fine up to $500, according to officials.

Officials said the purpose of the new ordinance is to lay out a clearer time frame for solicitors, as well as to establish rules and regulations for the well-being of homeowners. Business personnel who plan to canvass in the community will be required to go through additional certification and permitting requirements, according to officials.

Officials announced that township residents can obtain free stickers by coming either to the Bordentown Township Town Hall, the Police Department Records Bureau or the Township Clerk’s Office any weekday between 8:30 a.m. and 4:30 p.m. Residents are required to show state-issued New Jersey Driver’s License, tax bill or other suitable proof of residency, according to officials.

People with questions or are concerned about anyone who visits their home are encouraged to contact the BTPD at 609-298-4300 or in an emergency via 9-1-1.