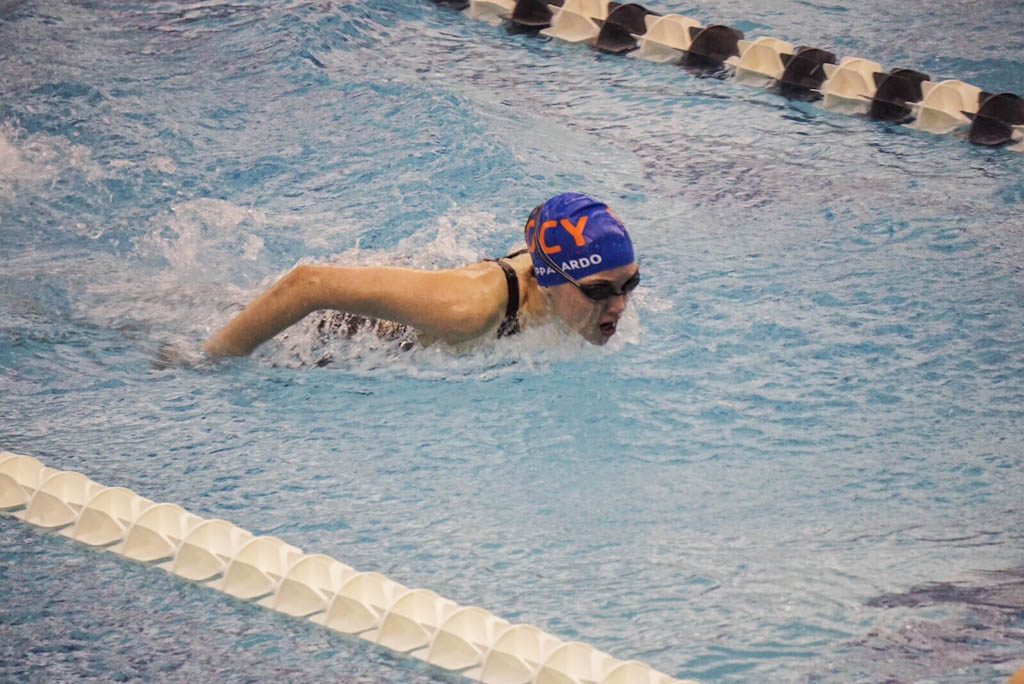 Jenna Pappalardo has been an elite amateur swimmer for years now.

But the past year has undoubtedly been the best swimming stretch of her young life.

Between August 2018 and August 2019, Pappalardo became one of the best swimmers in Ocean County — and in the entire country.

In the 2019 Ocean County Championship meet in January at the Ocean County YMCA, the Jackson Memorial High School sophomore won the 100-yard freestyle and led the Jaguars’ 200-yard medley team to a first place finish.

Then in the 2019 YMCA National Championship at the University of Maryland from July 30-Aug. 4, Pappalardo placed third in the 50-meter backstroke, her highest finish in any event in three YMCA national championship appearances going back to 2017.

The 16 year old never would have done any of that without nearly being forced to quit the sport last summer.

In the 2018 YMCA National Championship, also at Maryland, Pappalardo wasn’t performing well. She would finish events, hop back up on the deck and then start coughing, wheezing and keeling over.

It was scary, for both Pappalardo and her father, Jim Pappalardo.

“It was disconcerting to see your child not being able to breathe,” Jim Pappalardo said. “We didn’t know what it was.”

“I would just start wheezing,” said Jenna Pappalardo. “I had a hard time breathing for a few minutes, but then it would calm down.”

Pappalardo had to pull out of her best and favorite event, the 50-meter backstroke, because it took place on the last day of the meet, Aug. 3, 2018, after the breathing problems had hounded the Jackson Township resident for days already. Instead of swimming in her event, Pappalardo walked into the doctor’s office located near the pool deck.

Jenna and Jim were terrified that Jenna had asthma, and that she wouldn’t be able to swim at the same high level anymore, or maybe even at all. But the doctor examined Pappalardo, ran some tests and discovered that she didn’t have asthma.

She was just experiencing vocal chord dysfunction, a minor breathing issue. The doctor prescribed Pappalardo some breathing exercises, like breathing, panting and then breathing again, with the purpose of learning to control her breathing, and an inhaler in case of emergency.

“It felt weird to do at first,” Pappalardo said. “Unnatural.”

By September, Pappalardo was practicing again and “kind of breathing normally,” she said. But by the start of the high school season in November, she was getting through two hour practice sessions at the Ocean County YMCA without any issues.

Pappalardo’s breathing had returned to normal, and she stopped thinking about it when she jumped into the pool. She was ready to go up a level during the high school season.

“I was totally cured,” she said. “I don’t even remember what the issue was called.”

The sophomore had such a strong 2018-19 campaign that her teammates named her the most valuable sophomore in Jackson Memorial’s program. Then she went back down to Maryland for the YMCA National Championship, swam in events for all six days and achieved her best finish ever in her final event on the last day of the competition.

Pappalardo’s breathing had never been better.

Jenna wants her dad to witness a similar scene next summer, only better. Her new goal is to finish at least second in the 50-meter backstroke at the YMCA National Championship, not third.

“I just have to keep training,” Jenna Pappalardo said.

“It’s a great life lesson,” Jim Pappalardo added. “Sometimes you have to rise and take your fears head on, and she certainly did that.”