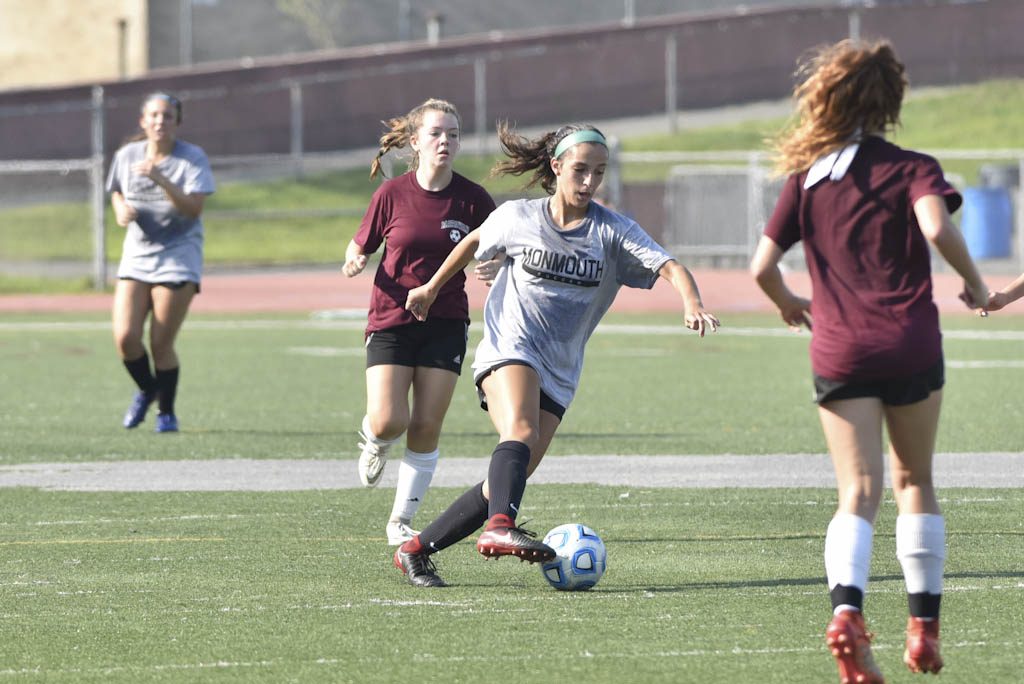 The Monmouth Regional High School girls’ soccer team was “pretty good” in 2018, according to the team’s coach, Devon Williams.

The Falcons went 8-7-2 and lost in a shootout to Holmdel High School in the first round of the NJSIAA Central Jersey, Group 2 sectional tournament.

But Monmouth Regional was also “not as good as I would have hoped,” Williams said.

“We should have went further in states and we missed the Shore Conference Tournament by a game,” she explained.

And in her assessment, Williams outlined Monmouth Regional’s goals for the upcoming fall: Make the Shore Conference Tournament and get past the first round in the state sectional tournament.

The Falcons are returning nearly every key contributor from 2018. So those are not unrealistic goals.

Monmouth Regional will open its 2019 season with a Sept. 5 local game at the Ranney School. Opening tap in Tinton Falls is scheduled for 4 p.m.

“We just have to play through Ranya and play strong defense,” Williams said.

“Ranya” is senior center midfielder Ranya Senhaji, a dynamic two way player who recorded 16 goals and six assists a year ago. She is already committed to play Division 1 soccer for the University of South Carolina starting in 2020.

With her dribbling flair and blistering shot, Senhaji is one of the best offensive players in central Jersey. But she is also one of Monmouth Regional’s best defensive players, and that’s why she plays center midfield.

“She can work back because she’s in phenomenal shape,” Williams said.

The second year coach is not worried about Senhaji. As long as the senior stays healthy, she will be Monmouth Regional’s constant.

The variable will be the team around her. Williams has talent, but it was inconsistent in 2018, when Monmouth Regional’s longest winning streak was two games.

But the talent should be more consistent in 2019.

Senior outside midfielders Courtney Hicks and Julia Pillari are entering their second season playing together, and with Senhaji. Hicks, who scored 11 goals as a sophomore in 2017, can play a complementary scoring role to Senhaji. Pillari, who notched three assists a year ago, can be a playmaker down the side of the pitch.

“They have chemistry and they’ll be our attack,” Williams said.

Monmouth Regional should score plenty in 2019, but defense will be more of a question mark.

The defenders are there. Senior back Jillian Vigil is a returning starter who clears the ball out and “is loud and takes control,” Williams said. Sophomore Kaitlyn Keane is a converted forward with natural defensive instincts, like closing on the ball to cut off angles.

They’ll form a solid tandem, and they’ll help cover the Falcons’ one massive hole, in goal. Last year’s starter, Alison Skubik, graduated in the spring, and her backup from last year did not return for 2019.

Senior Sierra Aviles, a field player who never played goalie before, has stepped up and taken over the spot. The new keeper has improved a lot since the first day of the preseason, but she is “definitely not a trained goalie,” Williams said.

“She is working on angles and when to come off the line,” the coach added.

But Williams is encouraged by Aviles’ progress, so her expectations are still high.

“We have a chance to go far,” Williams said.