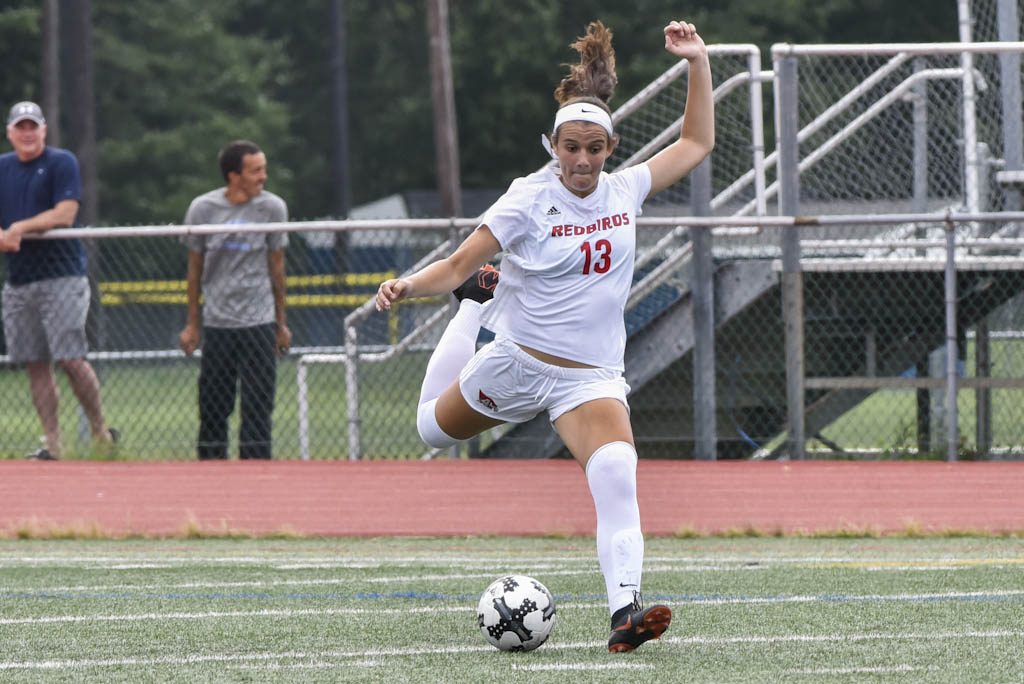 Allentown High School has established a standard for excellence on the girls’ soccer pitch, and this year’s players are confident they can maintain that standard.

In fact, they already are maintaining it.

On Sept. 5 at Hamilton High School West, the Redbirds opened their regular season with a 7-0 victory over the Hornets. Six different Allentown players got on the score sheet. The Redbirds outshot the Hornets 11-3. They also got better as the game went on, scoring five goals in the second half.

Over the past two seasons, Allentown went 39-3 and won the 2017 NJSIAA Group 3 championship. Maurer’s club was even ranked No. 1 in New Jersey at various points by multiple media outlets.

It’s a difficult standard to maintain, especially after losing six starters that formed the core of those teams. But these Redbirds still have five returning starters and a host of talented newcomers to the varsity lineup and bench.

“They are ready to take that next step,” Maurer said before the season started. “It’s their team now.”

The new lineup took that next step on opening day. Senior midfielder Vanessa Rodriguez, a returning starter and a Division 1 recruit to Iona College, sparked a furious and constant assault on the Hamilton West net.

Maurer said the Redbirds spent a lot of practice time leading up to the game on connecting in the offensive third. It showed on Sept. 5, even on the high, patchy grass field at Hamilton West, which slowed the ball down quite a bit.

The players were all smiles after the game. They were so busy talking to each other that they forgot to bring their water jugs back to the bus. A few girls had to race back across the field at the last second to retrieve them.

“Our team is really connecting on the field and getting along, and that’s a huge part of the game,” Maglione said.

“We work well together and we’re having fun this year,” Rodriguez said.

“Yeah we’re just having a good time this year playing for each other and for ourselves,” Denney added.

Now, Allentown is far from a finished product. The Redbirds have three new starters on the back line and a new goalkeeper, and they barely had to defend in the Hamilton West game.

But they will be challenged plenty in future games against really good teams, like the three Colonial Valley Conference rivals Allentown will see in the next week, Hopewell Valley Central High School, Lawrence High School and Notre Dame High School.

“It’s going to come along in time,” Maurer said of the new starters. “End of October, when the season really means something, they are going to be good.”

Maurer’s players think they will be better than good.

“Yeah, we’re winning it all,” added Denney and Maglione.