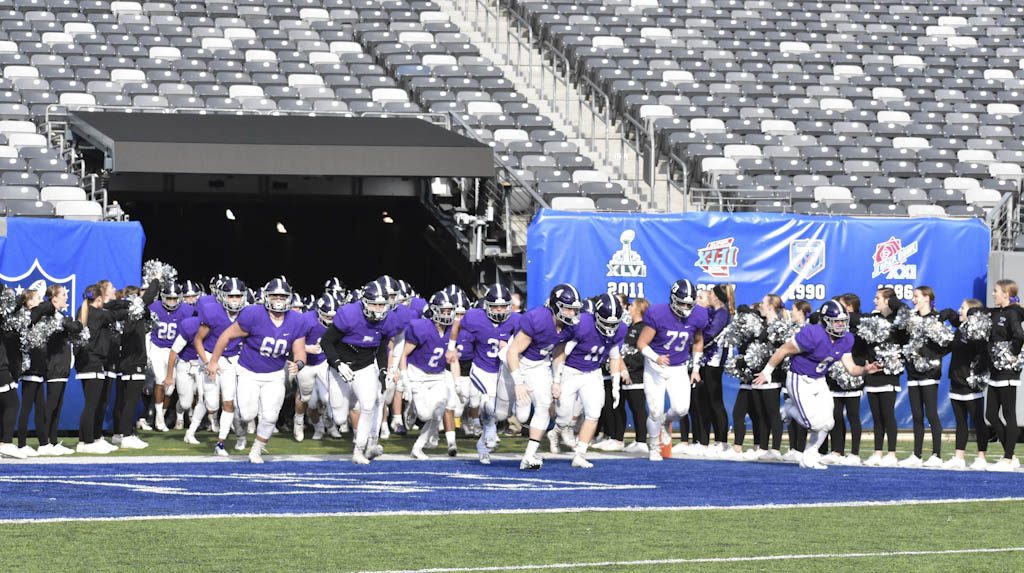 Before Sept. 6, John Volker didn’t think the Rumson-Fair Haven High School football team would be better than it was in 2018, when it won the NJSIAA Central/South Jersey Group 3 Bowl Championship with a 26-18 victory over Camden’s Woodrow Wilson High School at MetLife Stadium.

Volker, Rumson-Fair Haven’s junior running back, was well aware that the Bulldogs lost nearly every starter from that 10-2 championship team.

But then on Sept. 6 at Count Basie Park in Red Bank, Rumson-Fair Haven beat its archrival, Red Bank Catholic High School, 20-14, in the season opener for both teams.

It was Rumson-Fair Haven’s first victory over RBC since 2002, breaking what was actually a 12-game losing streak because the series went on hiatus from 2014-2017.

After Rumson-Fair Haven’s surprising victory on Sept. 6, Volker was singing a different tune.

“I think we’re better than last year, if I’m being honest,” Volker said.

“I believed in my team but we definitely performed better than anyone expected us to,” he added.

Red Bank Catholic, like Rumson-Fair Haven, is one of the best programs in New Jersey. Like its archrival, RBC also won an NJSIAA state title in 2018, the NJSIAA Non-Public Group 3 championship with a 14-10 victory over Mater Dei Prep, also at MetLife Stadium.

But unlike the Bulldogs, the Caseys have a lot of starters back for 2019, including two Division 1 recruits in tight end/defensive end Kevin Bauman and tight end/outside linebacker Charlie Gordinier, who are committed to play for the University of Notre Dame and Boston College, respectively.

With so much top level talent back in the Caseys’ lineup, and with the Bulldogs breaking in a mostly new lineup, you can guess how most fans and media members expected this game to go. Red Bank Catholic was supposed to win.

Then a funny thing happened. Behind five new starters on the offensive line, Rumson-Fair Haven imposed its will.

Volker carried the ball 29 times for 166 yards and a 28-yard touchdown. He forced RBC to stack the box and open itself up to play action passes downfield. On Rumson-Fair Haven’s first scoring drive, quarterback Collin Coles hit a wide open Volker down the left sideline for a 21-yard score.

Volker is ready to power that attack all season long. On the field after the game, he was smiling and gregarious even after carrying the ball 29 times and catching it another two times.

Rumson-Fair Haven’s defense was also solid on Sept. 6, forcing four first half punts and then, early in the third quarter, taking an interception back to the house. Safety Ryan Ruane jumped a route along the left sideline and raced 67 yards to pay dirt.

“We lost all those big time seniors but, it’s like coach (Jerry Schulte) says, we just reload,” Ruane said. “We got young guys that step in, fill the roles and do their jobs.”

“This program has just become a program now, right?” asked a reporter.

Red Bank Catholic is a program, too, and it will be heard from again this fall. The Caseys are too talented to let this loss linger.

Even on Sept. 6, they mounted a furious comeback in the second half, ripping off 14 unanswered points and only losing after they turned the ball over on downs with less than 2:00 left in the game.

Red Bank Catholic will try to even its record on Sept. 14 at Manasquan High School, with kickoff slated for 1 p.m. Rumson-Fair Haven will aim for a 2-0 start on Sept. 13 at Wall High School. Kickoff is set for 7 p.m.