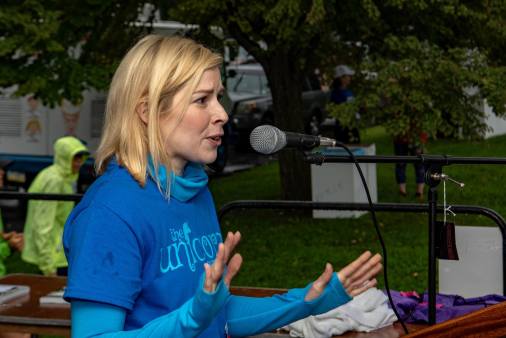 Christina Kosyla of Bordentown City who was diagnosed with Desmoid-Type Fibromatosis in February 2018, speaks at the 2018 Desmoid Tumor Research Foundation's Annual "Running for Answers" 5K event in Philadelphia. Submitted Photo
×

Christina Kosyla of Bordentown City who was diagnosed with Desmoid-Type Fibromatosis in February 2018, speaks at the 2018 Desmoid Tumor Research Foundation's Annual "Running for Answers" 5K event in Philadelphia. Submitted Photo

When 30-year-old Christina Kosyla, a Bordentown City resident, was diagnosed with a rare disease in February 2018, she made a decision to not let it get the better of her.

Instead, she decided to take action and bring a community together.

Kosyla was diagnosed with Desmoid-Type Fibromatosis, a rare soft tissue sarcoma. Desmoid tumors, also known as “aggressive fibromatosis,” are described to develop from fibroblasts, which are found throughout the body and may become life threatening when they constrict vital organs such as the kidneys, lungs or intestines.

According to the Desmoid Tumor Research Foundation (DTRF), the disease is described as a rare one, which impacts approximately every 2-4 people per million.The World Health Organization defines it as “an intermediate grade, non-metastasizing soft tissue sarcoma.” In the United States, approximately 900 cases a year are diagnosed.

Before Kosyla’s life changed forever upon learning of her diagnosis, she said it was a “winding road” to get there, first.

She said that approximately two years ago, she had been experiencing ongoing pains in her upper body near her shoulder. After a co-worker mentioned to Kosyla that her collar bone appeared to be swollen, she had a physical therapist look at it, who then informed her it was of no concern. After that, she had a chest x-ray conducted, which revealed a lipoma in her chest.

A lipoma is described as a lump under the skin that occurs due to an overgrowth of fat cells. Doctors consider lipomas to be benign tumors, which means that they are non-cancerous growths.

Following this discovery, Kosyla opted to have the growth surgically removed. After the surgery though, she said she was “met with more questions than answers.”

“When they opened me up, they told me they didn’t find anything,” Kosyla said. “So, I bounced around from doctor to doctor, trying to get someone to take me seriously knowing that something was wrong with my body.”

Kosyla said that after multiple visits to various doctors, she ended up at the University of Pennsylvania in January 2018, where she explained that doctors performed a chest x-ray and CT scan. Following a review of her scans, Kosyla revealed that doctors informed her that the growth was not a lipoma, but in fact, sarcoma. The doctors told her she needed to get biopsied as soon as possible.

“My life took a complete turn,” she said. “I went from thinking about ‘What kind of vacations and adventures am I going to plan?’ Then, it became about scans and biopsies. In the two weeks before I got my official diagnosis, I was wondering how much time I have left.”

On Feb. 15, 2018, Kosyla said doctors officially informed her that she was diagnosed with Desmoid-Type Fibromatosis. According to the DTRF, Desmoid tumors do not spread, so they are not generally defined as a “cancer.”

Although these type tumors are not necessarily regarded as cancerous by doctors, officials from the DTRF said that there are cases where an individual can have multiple of these tumors at once. Some physicians may implement cancer-related drugs and/or treatment procedures where a patient can potentially endure the same pains, discomfort and impact to normal life that can be just as challenging if they did have a cancer, according to the DTRF.

Following her diagnosis and research into it, Kosyla expressed that she experienced a small sense of relief, but was prepared to face the disease head-on.

“Once I found out it was a Desmoid tumor and not some of the other sarcomas that I had read and heard about, I was a bit relieved,” she said. “It was more of a, ‘Let’s armor up and get into this battle’ [approach].”

She said she read up on Desmoid tumors as much as she could for herself and to be well-informed during doctor’s visits, but her surrounding support system was not lost on her, too.

“I’m so lucky to have the greatest family, friends and co-workers in the world,” she said. “They were really supportive.”

With a network of support and information at-hand, Kosyla said she is now focused, not on herself, but on bringing people together through this disease.

“Because it is so rare, I knew that unless I made a lot of noise, the odds were that I wouldn’t meet someone organically who has this diagnosis,” she said. “I also have that great support from family and friends, so the easiest way to update everyone at once was to start a blog.”

In her first step to updating and informing others about her diagnosis as well as information about Desmoid tumors in general, Kosyla said she began to journal her experiences with the diagnosis online at www.girlmeetscancer.com as well as through her Instagram page with the handle, “girlmeetscancer.” She said that through her online postings and frequent updates, she began to connect with other Desmoid patients both locally and internationally.

Kosyla explained that once she began treatments for her diagnosis in March 2018, she has already been through three different forms of chemotherapy, but has used her blog and Instagram page to provide updates regarding her treatments along the way.

Through the connections she has made because of these outreach efforts, Kosyla said that she felt the common ground and understanding between those diagnosed with this disease can help relieve the personal and physical challenges associated with it.

“It’s all of us saying, ‘We know this is rare, but there are people behind this rare diagnosis,’” she said. “It has also been encouraging to have people who understand the challenges that you face when you have this real bizarre diagnosis.

“It’s the worst club that nobody wants to be a part of, but it has the best members. Every person that I have met has been so generous in sharing their own experience in hoping that it can help others,” she added.

But even with the opportunity to share and connect with others via online and social media, Kosyla, who’s currently a teacher at Stuart Country Day School of Princeton, said that her opportunity to educate others about Desmoid tumors was just as important.

“Teaching and educating people is part of what I do, naturally,” she said. “I wanted to explain, not only the basics of the disease, but my own experiences. It’s natural for me to want to understand the human experience and share mine.”

As Kosyla continues to persevere through her treatments as well as educate and connect with others along the way, she said she encourages those who may not already be familiar with the disease to take the time to read up on it at and get involved.

One way Kosyla said she will most definitely be getting involved this year and what she considers to be the “biggest outreach event” she is involved in is the DTRF’s 10th Annual “Running for Answers” 5K event in Philadelphia. The event is scheduled for Sept. 22 at the Please Touch Museum in Philadelphia.

People may register for the event online at runningforanswers.org or in person on race day morning prior to the start of the race.

For people interested in learning more about Desmoid tumors, they can visit the Desmoid Tumor Research Foundation’s website at dtrf.org.

For more information, contact event staff by email at information@runningforanswers.com or by phone at 215-760-3977.