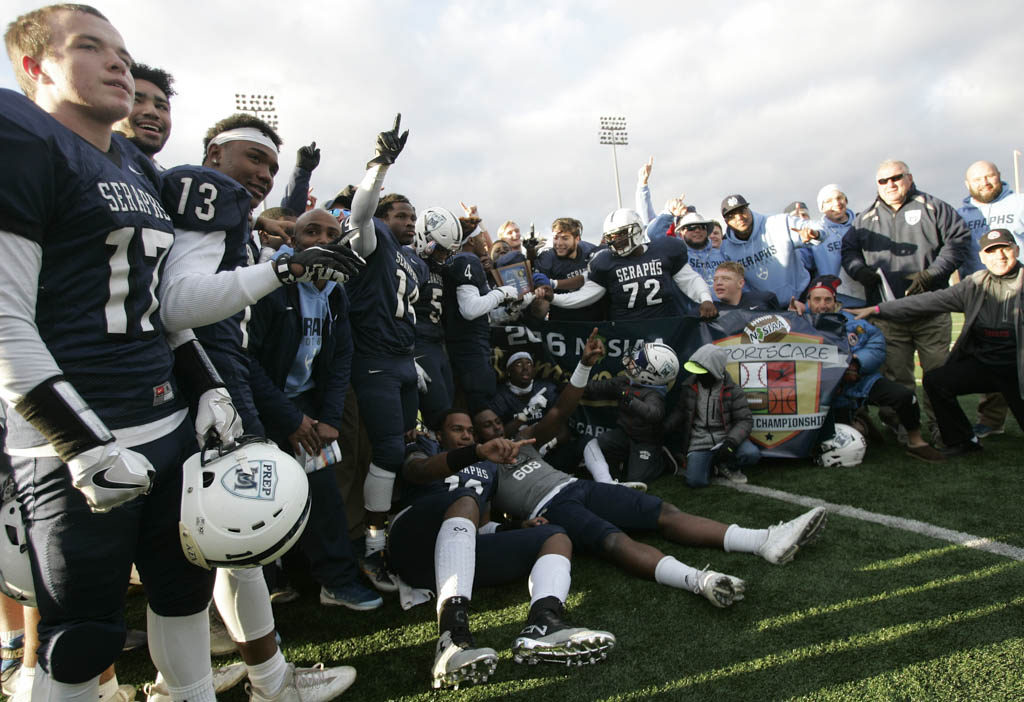 The NFL RedZone channel, which jumps from game to game every Sunday as different teams score or get close to scoring, has become a cultural phenomenon in recent years.

Since RedZone has the same fast pace as social media, a lot of younger fans even prefer it to actual games.

The Mater Dei Prep Seraphs are not an NFL team. They are a scholastic football team that plays in New Jersey.

But if they were an NFL team, they would have lit up the RedZone channel on Sept. 14 in Middletown.

Over the first two plus quarters, the Seraphs ripped off touchdowns of 53, 37, 39 and 73 yards. Even on their grass field, a rarity in New Jersey high school football these days, the Seraphs’ speed was way too much for the Jaguars to handle.

The Seraphs improved to 2-0 with the victory, and they have outscored their two opponents by a combined margin of 81-20. Jackson Memorial fell to 1-1 after beating Brick Memorial High School, 24-17, on Sept. 7.

In the Sept. 14 game, Mater Dei senior running back Malik Ingram carried the ball eight times for 122 yards and four touchdowns, all in the first half. He didn’t carry the ball after halftime. He didn’t have to.

Sophomore quarterback Alex Brown threw with the strength and accuracy of a senior Division 1 commit, completing five of eight passes for 166 yards and two scores. His top receiver on the day, junior Naran Buntin, posted a DeSean Jackson line: two catches for 110 yards and two touchdowns. Buntin sprinted over the middle and left his defender in the dust on both touchdown catches.

“They make my job a lot easier,” Brown said of Ingram and Buntin.

Mater Dei Prep made so many big plays that it didn’t even have to abide by the normal logic of football offense: Keep the chains moving. The Seraphs picked up about half as many first downs as the Jaguars on Sept. 14.

They didn’t need first downs. They were scoring touchdowns.

In the first quarter, senior Khurram Simpson bursted into the backfield, swatted a punt to the turf and recovered it at the five yard line. Ingram bulldozed into the end zone one play later.

“We want to go 1-0 every week. This week this was our most important game,” said Mater Dei defensive lineman Dom Guidice. “So we just came out of the gates firing.”

Mater Dei, looks like perhaps the best team in central Jersey—and maybe one of the best teams in the state. It will go for the 3-0 start on Sept. 21 at Freehold High School. Kickoff is set for 1 p.m.

Last year, the Seraphs lost to Red Bank Catholic High School, 14-10, in the NJSIAA Non-Public, Group 3 playoff championship game at MetLife Stadium. They want to go all the way this fall.

Every team says that. But with these Seraphs, it feels more like an expectation than a goal.

“We’re feeling great,” Brown said. “Everybody is up in the locker room.”