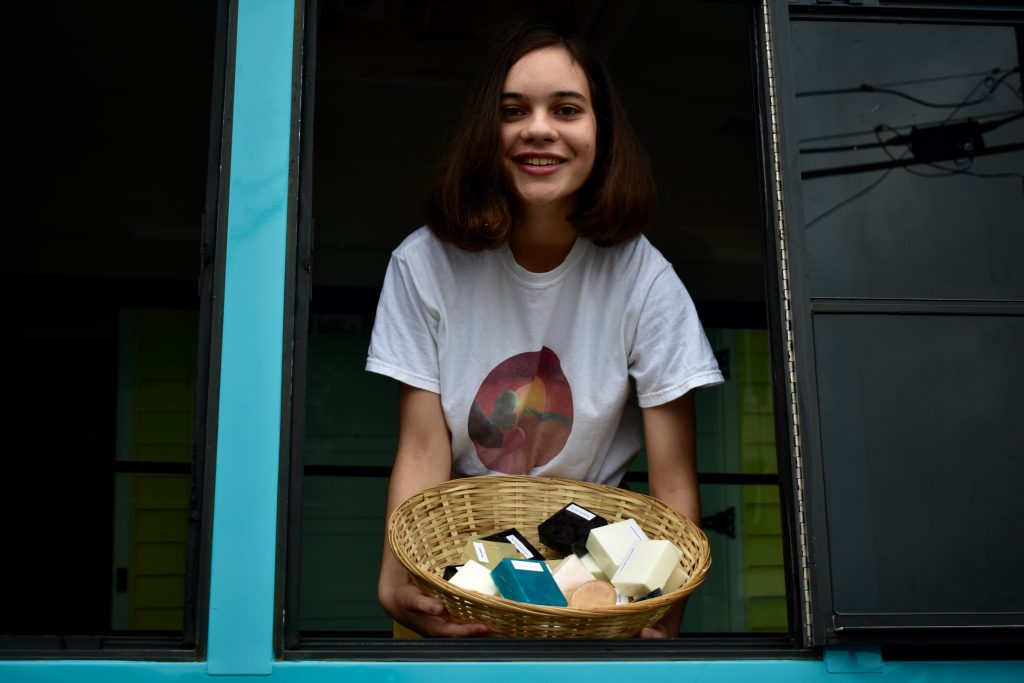 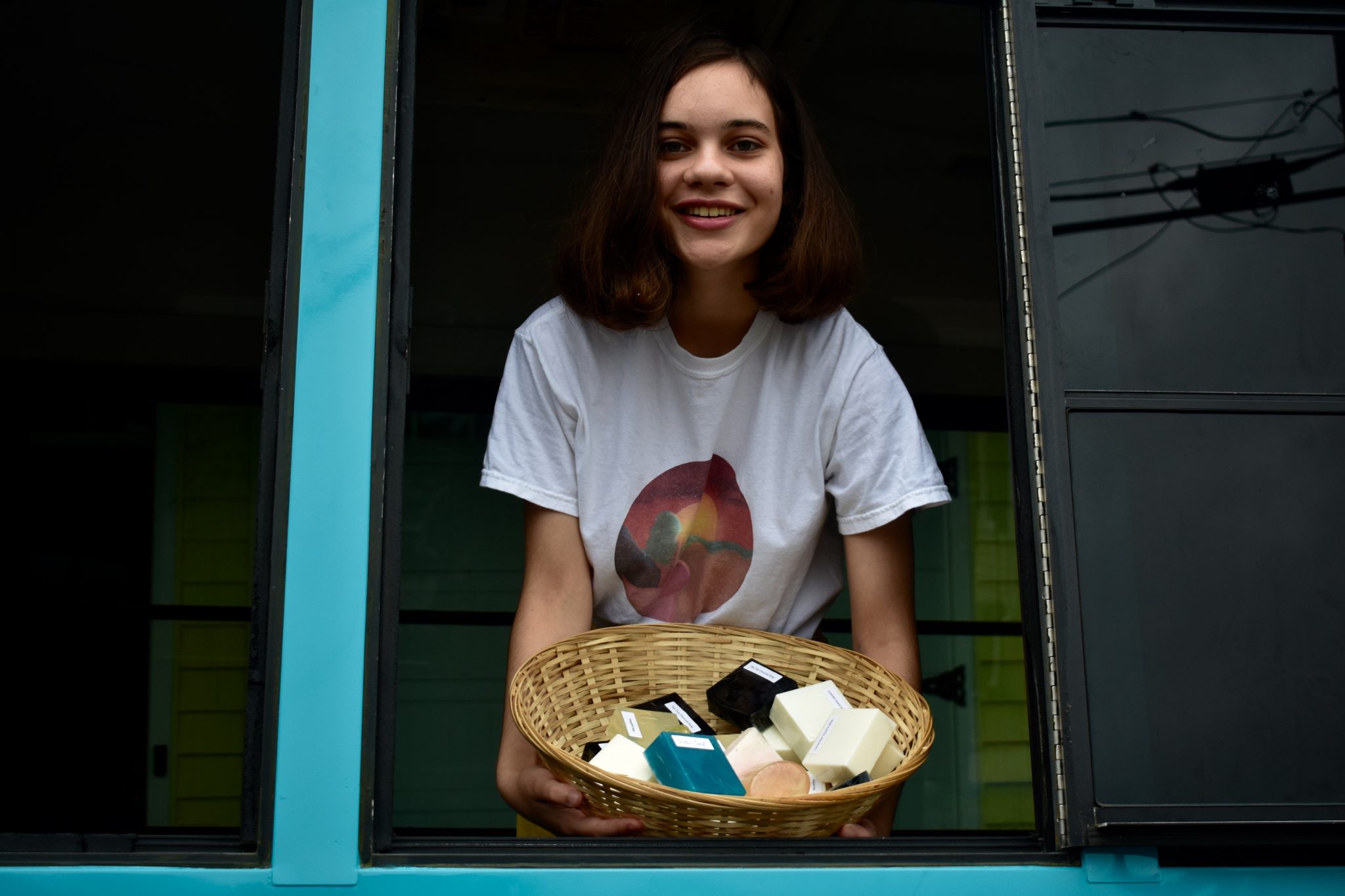 When life gives you lemons, you make lemonade.

That was 17-year-old Phoebe Allen’s mindset when she was young.

As a child, Phoebe planned elaborate lemonade stands outside of her home in Columbus, Ohio. But when her family’s second residence in Highlands was destroyed during superstorm Sandy in 2012, the young woman wanted to help out financially.

She wanted to bring her lemonade business to the Jersey Shore.

Her previous visions for lemonade stands were guided by a wise mind and youthful spirit. Phoebe drew intricate diagrams of her business and “hired” her friends as employees.

That optimistic mindset once involved the thought that her parents might reconfigure their home’s existing driveway to accommodate cars traveling through a series of additional amenities Phoebe imagined could make her lemonade selling business one-of-a-kind.

Her plan to sell lemonade in New Jersey came to a halt after the young woman realized she could not sell goods or offer services without a license.

Because Phoebe did not “want to go to child prison,” she sought other avenues of financial gain. She was 11.

A fan of American Girl dolls and books, Phoebe came across “A Smart Girl’s Guide: Money.” She read the content, completed quizzes, and concluded that she would sell something she created.

“If the American Girl (books) told Phoebe to do something, she did it,” laughed Beth Allen, Phoebe’s mother. “Ignorance was bliss in Ohio before she realized she could not make a beverage and sell it without a license. … The quiz results were terrible because I personally hate crafts and I knew somehow, as her mother, I would be involved.”

Beth said the only item she could imagine herself helping Phoebe make was soap.

Phoebe turned to the internet. She began watching Soap Queen TV on YouTube, and learned the basics of making and selling homemade soaps.

“Honestly, it was really weird how I just made a business,” Phoebe laughed. “I realized (making soap) was a simple craft and I could make it easily (as a child). I told my mom to take me to Michaels Craft Store. I said ‘I want to make soap and sell it.’”

The next summer, Phoebe sold her soap at a farmers market one block away from her Highlands home. Customers thought Phoebe was cute and called her “the soap girl.”

“She was determined,” Beth said. “We just bought some basic soap making supplies and it actually turned out to be a lot of fun.”

Fast forward to 2018 and Beth and Phoebe licensed a thriving business, Mother Nature’s Beauty. Beth left her full-time job at Highlights for Children to work alongside her daughter.

“If I was now going to be devoting my time and resources to this business rather than getting another full-time job, we had to do it right,” Beth said. “So we established the LLC and got a tax identification number. We signed up to pay sales tax. All that stuff.”

The mother-daughter natural skincare and soap company sells at farmers markets and festivals. Their unique selection of homemade soaps, made with skin-nourishing natural ingredients such as shea butter, koalin clay and pure essential oils, are handmade at their residence.

Their Highlands home was repaired after superstorm Sandy. However, Phoebe’s parents suggested their daughter save the money she made. That money would go toward her college fund.

“Phoebe wanted to help contribute to the financial strain (after Sandy) by lightening our financial load,” Beth said.

The duo said Mother Nature’s Beauty has become a family affair. Pheobe’s father, Christopher Allen, who the two jokingly refer to as their business’ “operations manager,” recently bought a school bus, had the vehicle painted blue and will transform the vehicle into a mobile soap store.

“The first time I started expanding business was at school,” Phoebe said.

“My teacher in eighth grade helped me make a product list. She allowed me to put it on her classroom wall and people would write what kind of soap they liked and wanted. I delivered the products and my classmates would give them as gifts.

“In high school, at first, I was teased for making soap. People thought it was low class. … The first time a student bought (the soap) it was a joke. But when they bought it, they liked it. Word spread,” Phoebe said.

Each week, Beth and Phoebe sell homemade soaps at markets in Holmdel, Asbury Park and Highlands. They are inspired by their customers, who offer feedback in terms of what they expect in a great bar of soap.

She said customers are very attracted to their clean, floral scented soaps.

Phoebe’s “soap girl” persona is influenced by the teenager’s innate desire to create. An artist at heart, the young woman draws inspiration from concepts such as Japanese animation.

Phoebe even has a collection of soap that features graphically designed anime characters printed on water soluble paper. The image on paper is placed inside a translucent bar of soap. She sells the collection of soap at anime conventions.

“Making soap is my comfort zone,” Phoebe said. “I know how to sell soap. I’m not so used to selling art. But I know soap will work. I know, from going to conventions, that (making anime soap) has never been done before.”

Christopher and Beth said they have all the faith in the world in their passionate daughter. What once began as a childhood effort to help her family during a hard time has transformed the teenager into a confident businesswoman.

“I’ve always been pretty entrepreneurial. … I get this from my father. Once he has an idea, he grasps onto (the idea) and he will not let go until that idea comes to reality.”

Phoebe said she plans to attend an art college in California next year.

“(Creating) is natural for her,” Christopher said of Phoebe. “It’s one project after the other. I suppose there is a fiscal aspect to it but she is all about creation, which has been a natural process all her life.

“The difficult part is holding her in. We have a natural synergy as a family. Everyone has their own ideas and they come to fruition. A lot of this is initiated by Phoebe.”