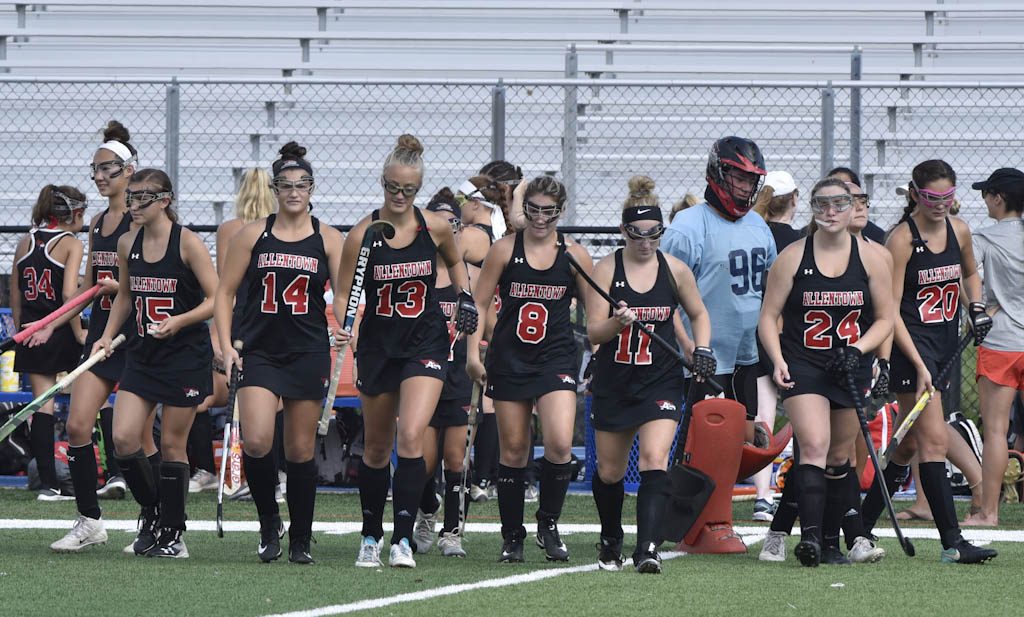 Despite a lineup of new starters and an unusual coaching situation, the beat goes on for the Allentown High School field hockey team.

The Redbirds are good on an annual basis—and 2019 has been no different.

A little more than two weeks into the season, Allentown is 5-1. It beat its last opponent, Nottingham High School, 10-2 on Sept. 19 on the road. Overall, the Redbirds have outscored their opponents, 28-10.

Allentown is succeeding with seven new starters and two head coaches, outgoing, almost emeritus local legend Mary Ellen McCarthy, and incoming, enthusiastic AHS alum Dana Schleider. It should be a transition year where the Redbirds just try to maintain the principles that helped them succeed under McCarthy.

“The upperclassmen are doing a nice job helping to develop the younger kids, sharing everything they’ve learned over the past few years,” McCarthy said before the season.

“We hope to be in the mix for the Mercer County Tournament and for states,” Schleider claimed, also before the season.

As McCarthy said, it starts with Allentown’s three returning field starters: Senior midfielders Morgan Vaccaro and Erin Murphy, and senior forward Gabrielle Leach. Vaccaro and Leach are scoring, but they are facilitating their younger teammates even more.

The duo has combined for three goals and nine assists. Murphy has taken on more of a scoring role, netting three tallies herself to go with one assist.

But they are all creating space and opportunities for the younger, less experienced players around them.

Allentown has been stout on defense as well, allowing two goals or less in all of its victories.

Senior Devin Mazza “has really stepped into a leadership role in the back,” McCarthy said. And junior goaltender Grace Leard, a returning starter, has made 38 saves, including nine in a close 4-2 victory over Notre Dame High School on Sept. 17 and 13 in Allentown’s only loss, a 3-1 decision to Lawrence High School on Sept. 11.

“She did really well last year and we want to see her get even better this year,” McCarthy said of Leard.

So far, so good, for Leard and the Redbirds as a team.

When McCarthy and Schleider came up with their succession plan in the offseason, and then got it approved by the Upper Freehold Regional School District, their goal was to maintain continuity and build a sustainable program. McCarthy had enough stature to name her successor, and Schleider is enough of a McCarthy acolyte to carry on her principles and legacy.

There is no better evidence of high school sports sustainability than the 2019 Redbirds, a team with seven new starters and two coaches that is succeeding like nothing changed.

“Dana will take it over, run with it and be extremely successful,” McCarthy said before the season.

“We’re pretty lucky,” Schleider said. “We have a good bunch of kids.”

“Now we want to start tackling one goal at a time this year,” she concluded.