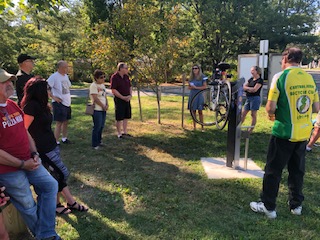 Dedication ceremony on Sept. 15 for the bike repair station in Village Park.
×

Dedication ceremony on Sept. 15 for the bike repair station in Village Park.

Bicycle riders in Cranbury are able to perform their own repairs with a new bike station that is located in Village Park.

Donated from the Princeton Freewheelers Club and the Central Jersey Bike Club, the bike station offers patrons the opportunity to make repairs for recreational bicycling and related activities.

“The Cranbury Parks Commission is thankful to the Princeton Freewheelers Club and the Central Jersey Bike Club for their generosity, it was a pleasure working with them,” said Lisa Rue, chairperson of the Parks Commission.

The bike station was officially unveiled during a dedication ceremony on Sept. 15 in Village Park.

Officials announced that the Princeton Freewheelers Club and Central Jersey Bike Club also promote the interests of bicycling, and encourage all forms of bicycling activity.

“In March of last year, Ira Saltiel, President of the Princeton Free Wheelers Club discussed with the Parks Commission that the Free Wheelers Club and the Central Jersey Bicycle Club were interested in donating a bike repair stand in Village Park,” Rue said.

The bike clubs recommended Village Park, but the parks commission discussed multiple areas throughout Cranbury and decided that Village Park was the best fit, according to Rue.

“Cranbury is a central location, so many bike rides begin here. I think it is wonderful that the Princeton Free Wheelers Club and the Central Jersey Bicycle Club wanted to give something to our community,” she said. “We didn’t go to them; they came to us. The station includes several retractable tools, but also a bike pump.”

The new bike station will be able to benefit all types of bike riders, according to officials.

“Bikers of all ages can take advantage of this bike station; from the experienced biker who needs a quick adjustment before going out on a long ride to a toddler who needs their tire pumped while playing in the park,” Rue said.

Cranbury Mayor James Taylor said the clubs saw a need for themselves and the community.

“This new bike station highlights the importance of individuals coming together and seeing a need and doing things privately, not looking for the town to do a handout. The bike clubs are dedicated to their favorite activity which is the mile-long bike rides,” Cranbury Mayor James Taylor said. “They took this upon themselves to fundraise and donate the bike repair station themselves.”