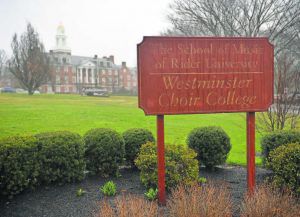 Carrying posters that proclaimed “WCC Proud,” “Don’t Stop the Music, Keep WCC in Princeton” and “You Cannot Silence My Voice,” about 100 students, alumni, faculty and supporters staged a protest in front of the Bart Luedeke Student Center at Rider University Sept. 24.

The protestors’ goal was to gain the attention of Gov. Phil Murphy, who was speaking at Rider University’s Rebovich Institute for New Jersey Politics’ “Governing New Jersey” series.

The protestors sought to hand-deliver letters to the governor, outlining their concerns about the impending move of the Westminster Choir College from its Princeton campus to Rider University’s Lawrence Township campus.

They had expected Gov. Murphy to leave the Bart Luedeke Student Center through the front entrance, near where they had gathered, but the governor left through a side door.

Rider University acquired Westminster Choir College through a merger in 1992. But three years ago, the university decided to sell the choir college for financial reasons.

Rider University launched a world-wide search for a buyer, with the goal of finding one who would keep Westminster Choir College in Princeton.

The university found a buyer in a commercial, Chinese-government owned entity known as Beijing Kaiwen Education Technology Co., Ltd., but the deal fell through in July.

In the wake of the failed deal, Rider University officials announced plans to move the choir college to its Lawrence Township campus, beginning in September 2020.

But opponents have filed a lawsuit in Mercer County Superior Court to block the move. They include faculty members from Westminster Choir College and Rider University, and Westminster Foundation members. The foundation is made up of alumni, faculty and supporters.

Meanwhile, attendees at the Rebovich Institute event, which included Westminster Choir College supporters, Rider University students and the public, were allowed to submit written questions on a card to Gov. Murphy.

Westminster Choir College freshman Gregory Nappa said none of the cards that asked questions about the choir college were among those chosen to be answered.

“There were a lot of questions (submitted) about the musical institution, but Gov. Murphy did not answer one question. It’s very frustrating that our own governor won’t support us,” Nappa said.

Gary and Pat Guth, who are both graduates of Westminster Choir College, said they waited outside the student center for a chance to talk to Gov. Murphy.

“It’s not just a few people who are interested in Westminster Choir College,” Gary Guth said.

His wife agreed, and said the move would affect the entire Princeton community. She pointed to the Westminster Conservatory, which offers a wide range of musical instruction to children and adults through private and group lessons.

“Rider could sell the Princeton campus. It’s 23 acres. It could turn into a commercial development, or residential, or who knows what,” said Pat Guth, who also serves on the choir college’s alumni council.