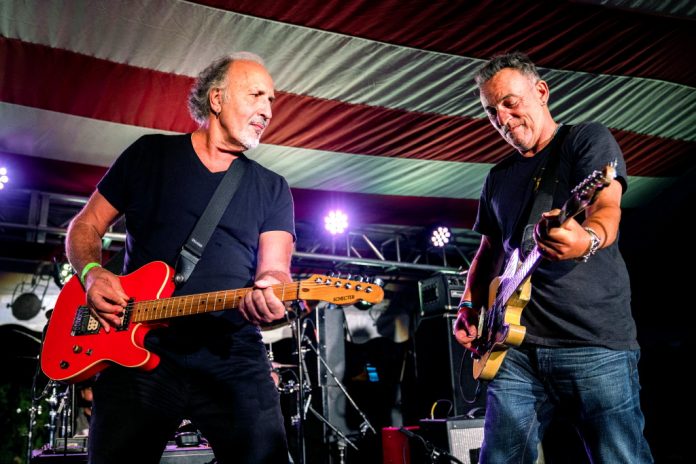 Fans of Freehold Borough native Bruce Springsteen who visit the “Springsteen: His Hometown” exhibit that has opened at the Monmouth County Historical Association, Court Street, Freehold Borough, may be surprised to learn the man known as “The Boss” has a family history in the community that dates back almost 250 years.

In addition to seeing guitars Springsteen has used across a career that began in the mid-1960s and posters advertising early appearances, visitors will learn about Springsteen’s lineage, which includes ancestors who fought in the Revolutionary War and the Civil War.

Visitors will also learn about Freehold Borough, the working class town that helped to shape the singer-songwriter and the music he has produced for a half-century.

The exhibit marks a change for the historical association because instead of focusing on people from the past, “Springsteen: His Hometown” focuses on a man who just turned 70 and is still practicing his craft and sharing his musical vision with fans around the globe.

The exhibit provides a comprehensive look at how Monmouth County has been thematically woven into Springsteen’s music and art. Residents of Freehold Borough may view the exhibit for free during the museum’s regular hours. Ticket information is available at www.SpringsteenHisHometown.com

A tour of the exhibit was conducted for members of the media on Sept. 25 by Eileen Chapman, director of the Bruce Springsteen Archives and Center for American Music at Monmouth University, West Long Branch, and Bernadette Rogoff, director of collections for the Monmouth County Historical Association.

The Bruce Springsteen Archives consists of more than 37,000 items and include what Chapman called “fan art” – works of art that were created by fans of the singer and presented to him over the years. Examples of “fan art” are displayed as guests move from the first floor of the exhibit space to the second floor.

“The Bruce Springsteen Archives exist because of the items fans have donated over the years. It began with fan items,” Chapman said, adding that fans continue to donate items such as photographs and paintings to the archives.

On the second floor, guests may watch a five-minute film, “Bruce Springsteen: Hometown,” which features commentary from Springsteen’s cousin, Glenn Cashion, and from Kevin Coyne, who is Freehold Borough’s historian.

“Our town was such a microcosm of America,” Coyne said in discussing the influence Freehold Borough has had on Springsteen’s music. “Bruce’s work is one of the great novels of post-war America.”

“The basis for Bruce’s work is Freehold and then it branches out to Asbury Park and Long Branch,” Cashion said.

Guests will learn about Springsteen’s parents, Douglas and Adele, and see the words he wrote to the late Robert “Doc” Hussey, who taught English at Freehold High School from 1960 to 1976, and then at Manalapan High School.

In a yearbook inscription to Hussey, Springsteen, who graduated in 1967, wrote, “… You (Hussey) have taught me things I could not get from any book. You have helped me understand people so much more than I had previously. You have gained my utmost respect and appreciation.”

“Freehold is excited about this exhibit,” said Meg Sharp Walton, the executive director of the Monmouth County Historical Association.

When it was noted some visitors may be surprised to learn about the Springsteens’ long history in Freehold Borough, Walton said that aspect of the exhibit “is very important to (Springsteen). … It reminds people to know their history.”

Proceeds from the exhibit will benefit the Monmouth County Historical Association, which is dedicated to preserving and sharing the story of Monmouth County, according to a press release.

On Sept. 28, the night before the Springsteen exhibit opened, a benefit was held for the historical association on its grounds on Court Street. Springsteen took the stage, thanked the association for hosting the exhibit and said, “It’s nice to be honored in your hometown.”

Springsteen then joined Joe Grushecky to perform his song “Light of Day” for the thrilled attendees.

On Sept. 29, the opening day of the exhibit, a steady stream of visitors made their way through the historical association’s building enjoying the presentation.

“Springsteen: His Hometown” is co-curated by Melissa Ziobro, Monmouth University’s specialist professor of public history, and Rogoff. Chapman and Robert Santelli, the founding director of the Grammy Museum in Los Angeles, are serving as advisers, according to a press release.