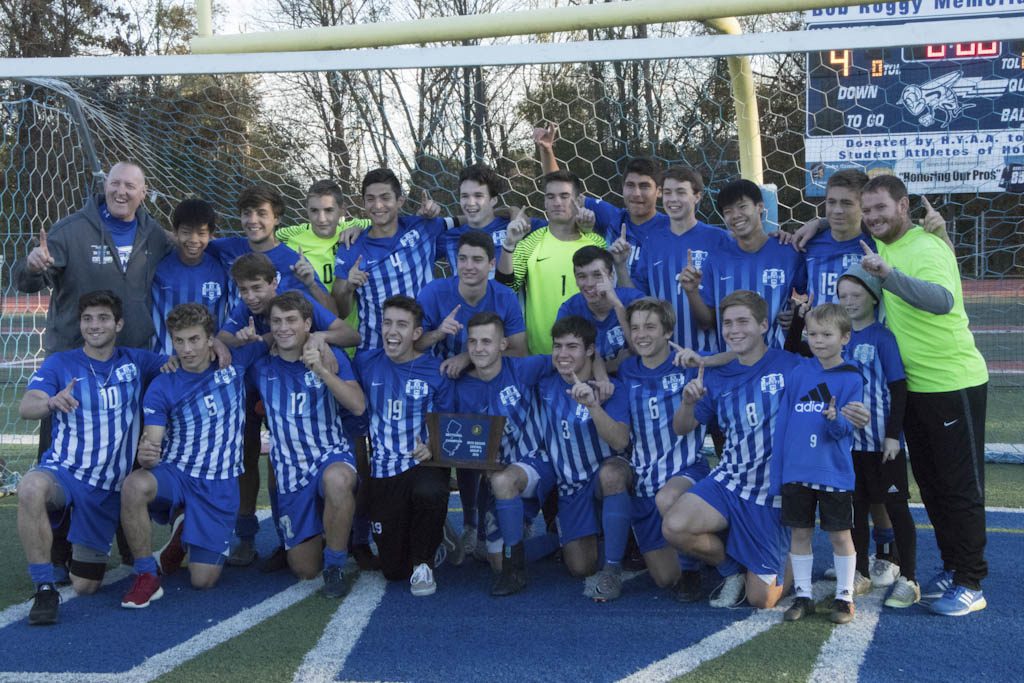 The Holmdel High School boys’ soccer program was arguably the best program in New Jersey over the past two years.

Between 2017 and 2018, the Hornets went 44-1-2 and won two NJSIAA state group championships. But after last season, most of the key players from those teams graduated. Holmdel’s coach, John Nacarlo, also stepped away to spend more time with his sons.

No other NJSIAA schoool–public and non-public–won state group championships in both 2017 and 2018.

So with a new coach and eight new starters, Holmdel was supposed to need time to grow in 2019.

Instead, the Hornets came into the season fully formed.

They are 11-0 and in first-place in the NJSIAA Central Jersey, Group 2 sectional power points standings. The NJSIAA playoffs start in late October, and the Hornets will be a threat to win a state title for the third straight fall.

“I thought there would be growing pains, but I knew we had the potential,” said Holmdel’s new coach, Ron Poll, an assistant in the program from 2016-2018.

Holmdel lost a lot of talent after last year, but not all of its talent. Three hugely important players, senior forward Jack Giamanco, senior midfielder Eric Hinds and senior midfielder Mark Walier, are all back for this fall.

“Jack knows where to be at the right time. He has great instincts and the ability to finish,” Poll said. “It comes naturally to him. You can’t coach it.”

Hinds and Walier also started last year, Hinds as a center midfielder and Walier as an outside back. Hinds is playing the same role in 2019 as “the quarterback of our offense,” Poll said.

“We play through Eric,” the coach added. “He’s been phenomenal in seeing the field and setting up the attack.”

Walier moved from outside back to holding midfield in 2019. But Poll occasionally moves him up to forward to play a two-man game with Giamanco. Walier is a two-way player who can defend and create offense.

Throughout his Holmdel career, he has done whatever his coaches have asked him to do. He is doing the same this year, in a season when the Hornets need his versatility more than ever because of their transitional lineup.

“Mark is a horse,” Poll said. “He does it on the offensive and defensive end.”

Those three players are great. They have been key players on state championship teams. But even a great trio isn’t enough to go 11-0.

Younger, newer players have been stepping up as well.

“They are the key to our success on defense, preventing things from getting close to the goal,” Poll said. “Both are very smart players.”

The 2019 Hornets have outscored their opponents, 33-10. The program has not lost a game since November 2017. And that streak does not look likely to end anytime soon.

“These are great kids that understand the expectations,” Poll said. “It’s a high level program that’s been successful.”