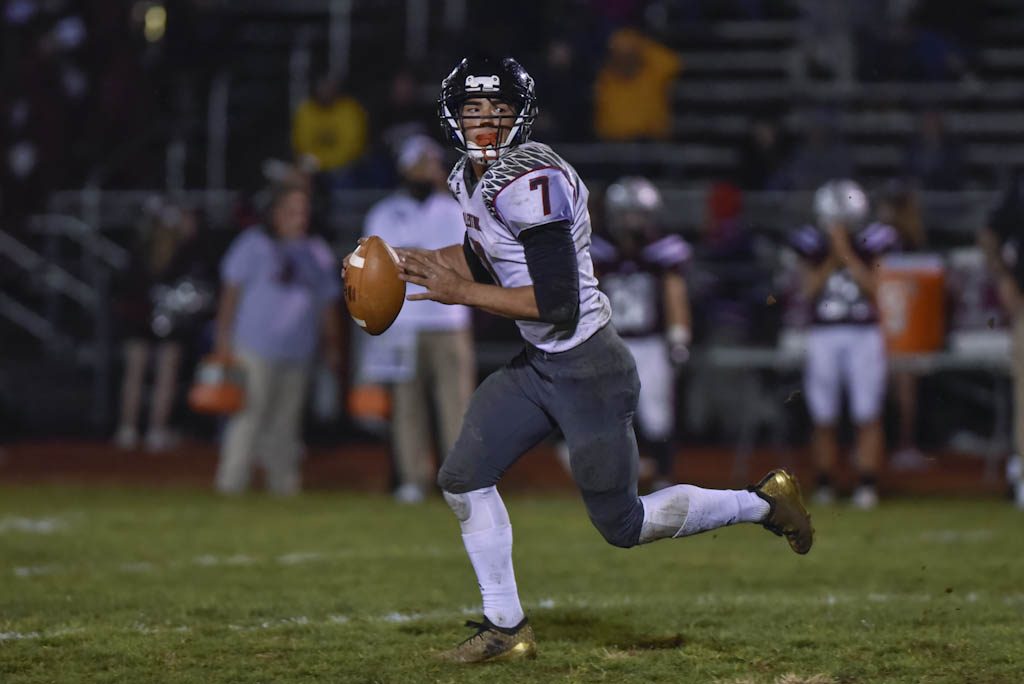 The Allentown High School football team is off to a 2-3 start to the 2019 football season, but the record doesn’t tell the entire story.

Allentown has shown some explosive capabilities on the offensive side of the ball, especially in its 28-20 home victory over Hightstown High School on Sept. 20.

If the Redbirds can start to score consistently and improve on defense, they might be able to start winning again.

Allentown was a near annual NJSIAA playoff team under former head coach Jay Graber, who left the program in February after nine seasons. Graber is now coaching the football program at Matawan Regional High School.

But his longtime assistant, Andrew Lachenmayer, took over for him at Allentown, and Lachenmayer’s Redbirds are maintaining one of the hallmarks of the Graber era: Offensive playmaking.

Junior quarterback Dan Merkel started, and thrived, in 2017 and 2018 under Graber.

In 2017, Merkel threw for 1,688 yards and ran for 604. He also tossed 17 touchdowns and ran for four more scores. Allentown went 6-4 and reached the Central Jersey, Group 4 state sectional playoffs, losing in the first round to Brick Township High School, 28-0.

In 2018, Merkel accumulated 1,429 passing yards and 844 rushing yards. He also threw for eight scores and ran for six more touchdowns. Allentown finished 4-5 and made the Central Jersey, Group 3 state sectional playoffs, falling in the opening round to Red Bank Regional High School, 30-13.

This year, the third-year starter is once again doing his thing. In Allentown’s victory over Hightstown, Merkel threw for 188 yards, ran for 124 and accounted for three touchdowns, two passing, one rushing. He had another big game in Allentown’s second victory of the season, 28-20 over Trenton Central High School on Oct. 11 at home, throwing for 239 yards, rushing for 62 more and accounting for three touchdowns, two passing and one running.

“Anytime the QB is back, it’s great,” Lachenmayer said. “He can make plays with his feet and arm.”

Merkel’s playmaking also opens the field for everybody else, making everybody around him better. In the Hightstown victory, Sal D’Adamo ran for a touchdown and caught three balls for 132 yards and two touchdowns.

In the Trenton Central victory, D’Adamo reeled in an 80-yard score from Merkel. Another Allentown receiver, Chris McCrea, caught three balls for 85 yards and a touchdown in that game.

Allentown’s other best offensive performance of the season came on Sept. 28 at Steinert High School, when the Redbirds lost, 28-21. In that game, Ramsey Ben Flah scored touchdowns on a 52-yard run and a 26-yard pass from Merkel.

Merkel maximizes his teammates’ playmaking abilities. The Redbirds have just not been able to unlock this offense on a week to week basis.

As evidenced by those scores, Allentown’s defense has struggled this fall. But the Redbirds have Merkel and a playmaking offense, and they should be able to compete with lesser teams than Notre Dame and Lenape, who at a combined 10-1 are probably the two best teams Allentown will see all year.

“I’m going into every game with a lot of confidence in our guys,” Lachenmayer said.

Allentown has three regular season games left on its schedule, starting with a game at Burlington Township High School on Oct. 19. Kickoff is set for 1:30 p.m.