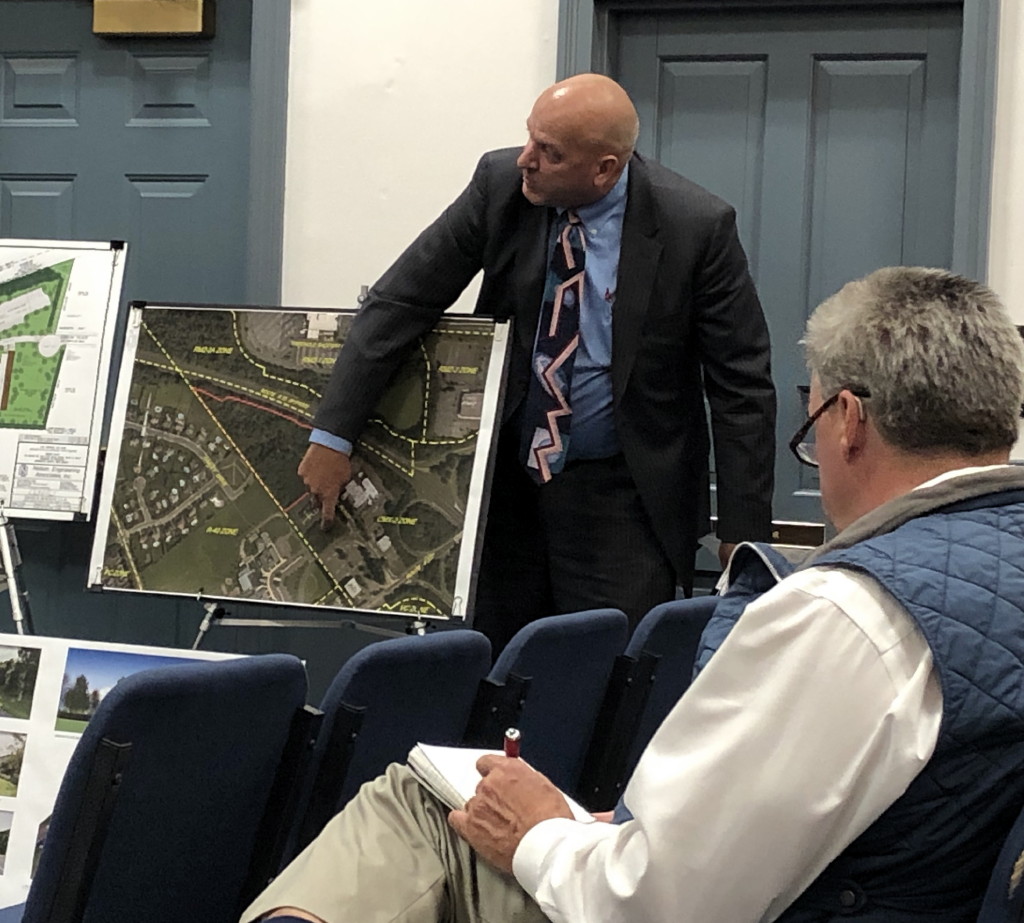 FREEHOLD TOWNSHIP – Members of the Freehold Township Planning Board are considering a request from Wasatch Storage Partners, LLC, for a use variance on a 13.2-acre property on Gibson Place.

Representatives of Wasatch Storage Partners appeared before the board on Oct. 3 to present their conceptual plans for a self-storage facility.

Self-storage is not permitted in the CMX-2 zone on Gibson Place and because of that restriction, Wasatch Storage Partners is seeking a use variance from the board.

If a use variance is granted, Wasatch Storage Partners will return to seek site plan approval from the board, according to attorney Frank Accisano, who represents the board.

The issue of the use variance was not decided on Oct. 3 and the application was carried to the board’s Nov. 14 meeting.

Attorney Jennifer Krimko, of the firm Ansell Grimm and Aaron, represented Wasatch Storage Partners. She said the concept plan the applicant presented that evening is subject to change based on conditions that may be established by the board during the hearing process.

In its concept plan, Wasatch Storage Partners is proposing to construct a self-storage facility with 11 buildings, 59 parking spaces for recreational vehicles, and site improvements such as landscaping and lighting.

The facility will have a small office where paperwork would be completed and a retail area where items such as boxes, tape and locks would be sold. There will be gated access with digital access for individuals who lease a storage unit. Gate hours will be 8 a.m. to 10 p.m.

White recommended that the applicant’s four lots totaling 13.2 acres be consolidated into one lot and Krimko did not take exception to that recommendation.

Krimko called on David Boesch, of Nelson Engineering Associates, to present testimony on behalf of the applicant.

Boesch said the property where the applicant wants to construct the self-storage facility is bordered by and/or near the Route 33 bypass, a Radisson hotel, the Chinese American Bible Church, a Kiddie Academy childcare center, the West Freehold School and homes on Oakley Drive. The property is wooded and undeveloped.

He said the applicant is proposing to locate the buildings farther away from neighboring properties than what is required (75-foot setback where a 50-foot setback is required). He said the only access to the business would be from Gibson Place.

He noted that three-story buildings are permitted in the CMX-2 zone and said all of the buildings that are being proposed are one story structures.

Krimko told the board the New Jersey Department of Environmental Protection has determined there are no wetlands on the property.

Scott Wyckoff, of Wasatch Storage Partners, provided testimony about the proposed operation of the business. He said individuals who lease a storage unit would have to use the keypad to enter and to leave the location.

The applicant’s proposal to provide 59 parking spaces where individuals would be able to park recreational vehicles, boats and box trucks prompted questions and comments from board members and the panel’s professionals and led to a dialogue with the applicant’s representatives.

Wyckoff said vehicles that are parked in the spaces would not have access to power and he said the spaces would be leased on a monthly basis. He said a manager would walk the site each day and call the owner of a vehicle if a problem was discovered in the parking area.

Wyckoff and Krimko both said the designated spaces would not be for overnight parking.

In response to a question from board Chairman Rich Gatto, who asked how the applicant determined there would be a demand for RV parking spaces, Wyckoff said the applicant conducted an analysis of the market.

“We are comfortable those 59 spaces would be occupied,” he told the board, adding that the proposed parking area would be an anticipated income stream for the business.

Gatto and board member John Bazzurro expressed concern that local contractors who may be prohibited from parking commercial vehicles at their residence would lease a parking space at the business and arrive each morning to pick up their vehicles, causing additional traffic at Gibson Place and Route 537.

“This could turn into an overnight parking lot and people being dropped off at 6 a.m., starting trucks,” Bazzurro said.

“That is not our intent,” Wyckoff responded.

Bazzurro asked if overnight parking could be prohibited in the lease and Wyckoff said that would be possible.

Krimko capped the discussion on the issue by saying, “We will further refine what we mean by RV parking and we will submit that (information) at least 10 days prior to the next meeting on this application.”

When the meeting was opened to the public, several residents of Oakley Drive asked questions about the business. One resident’s concern that led to a discussion involved the possible storage of hazardous materials in a unit.

Wyckoff said each lease issued by the business would prohibit the storage of flammable and hazardous materials in a unit. He said employees would use “reasonable care” to ensure no such materials are stored at the site.

The Wasatch Storage Partners application was carried to the board’s Nov. 14 meeting.