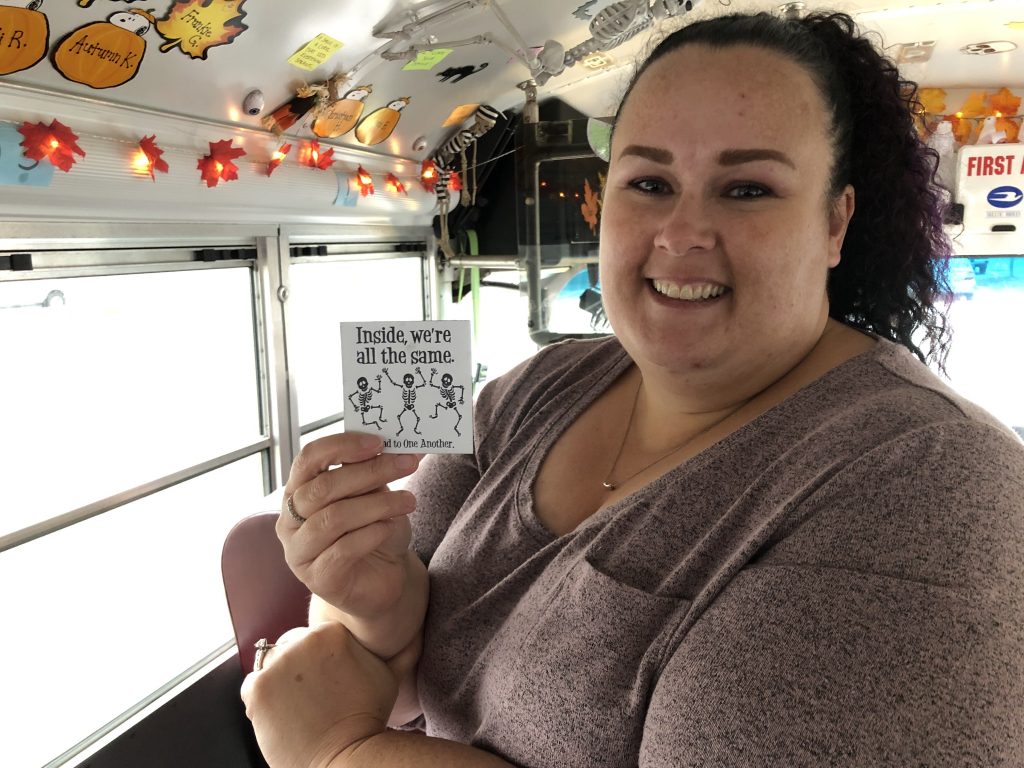 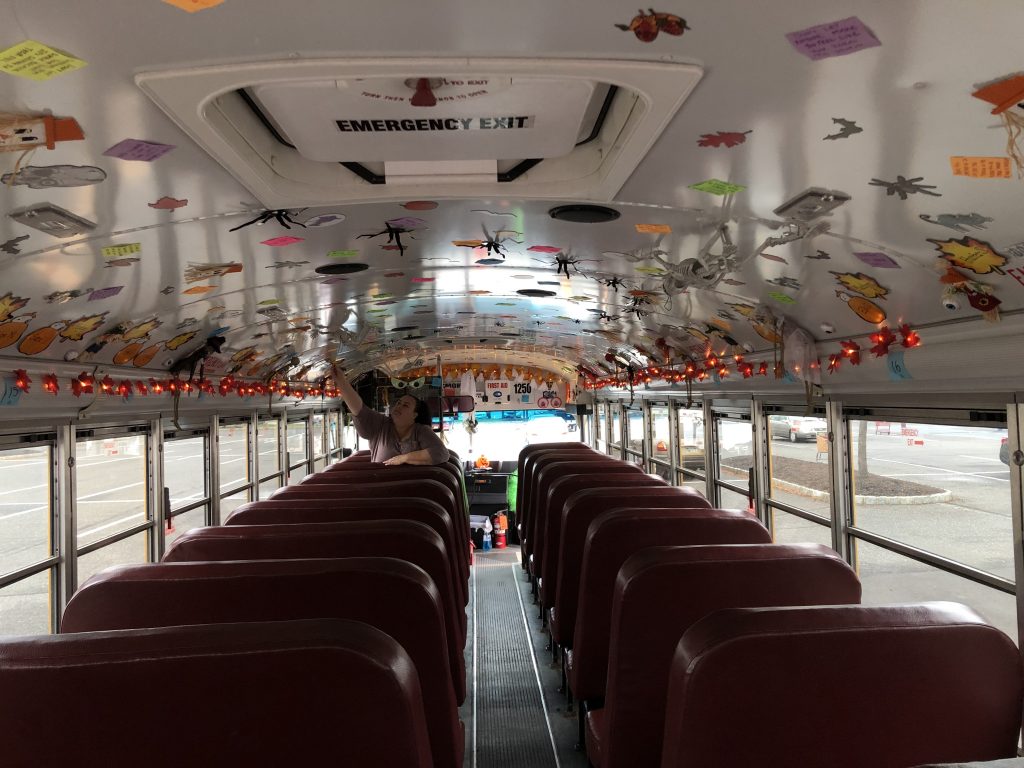 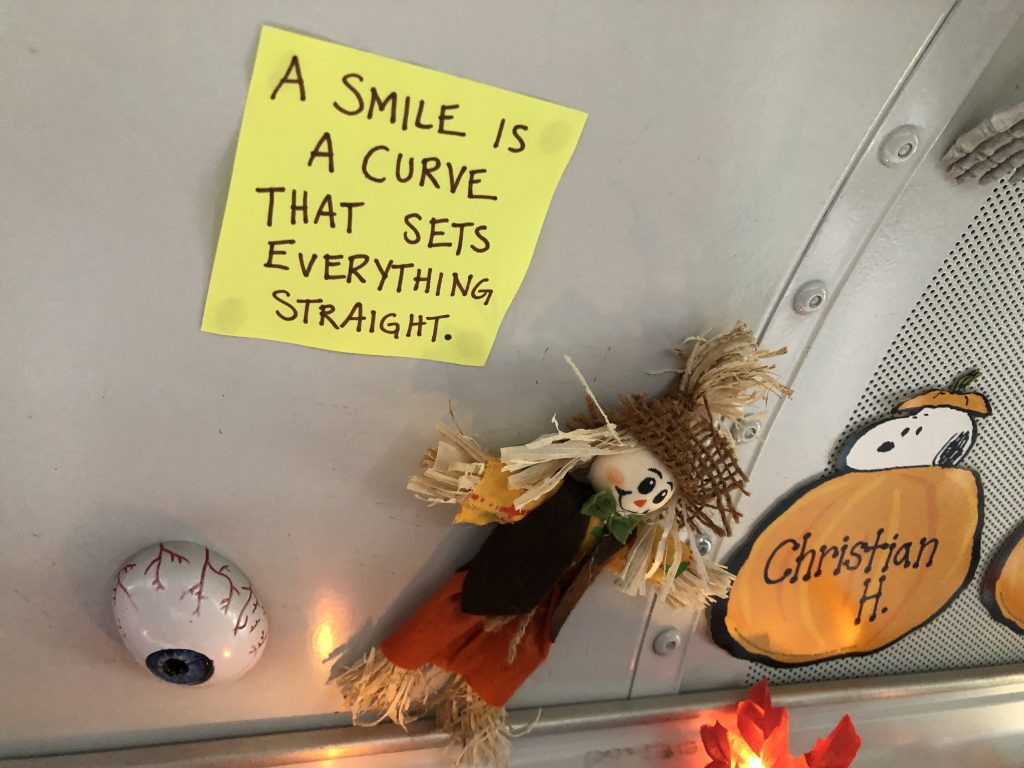 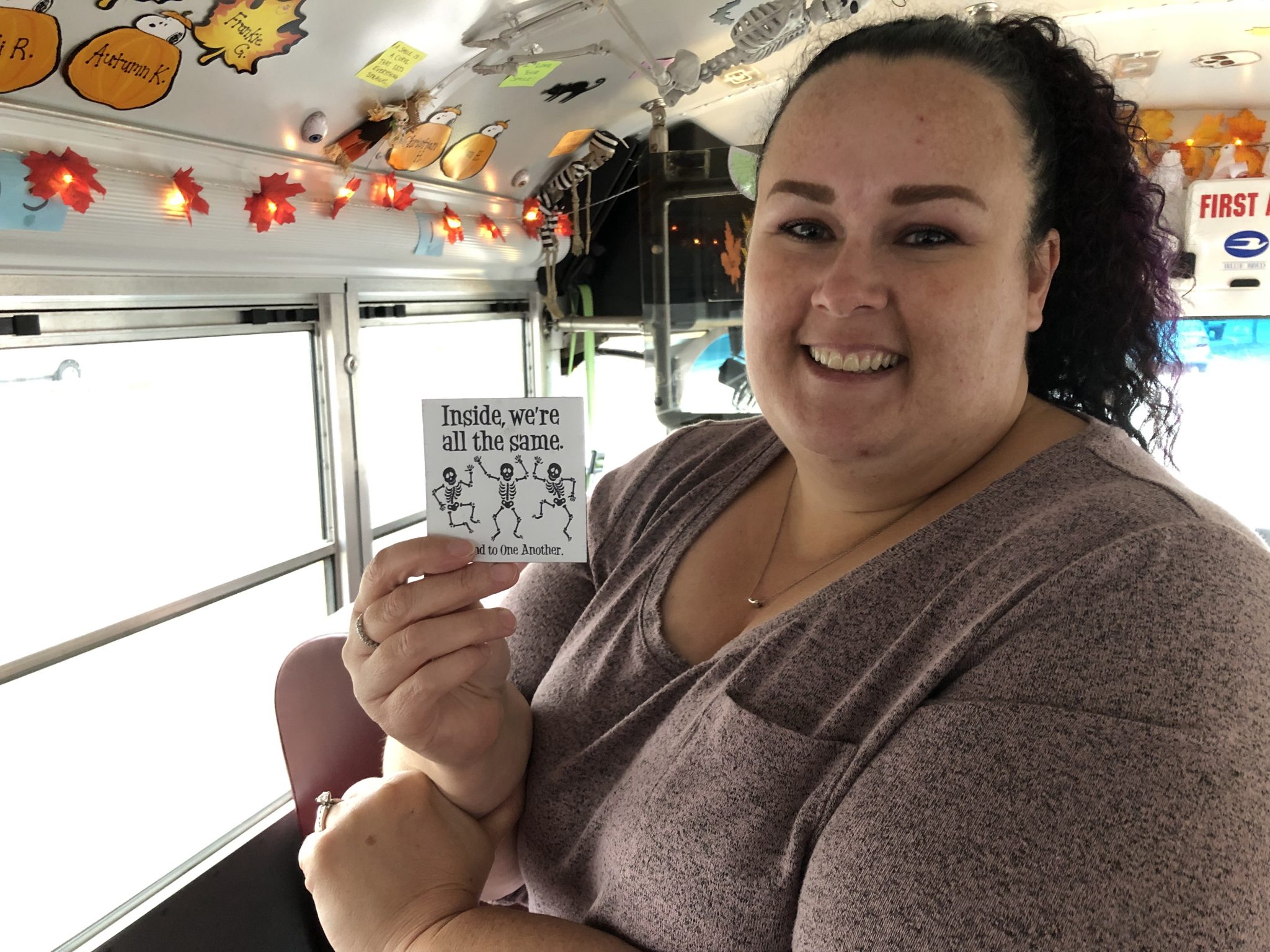 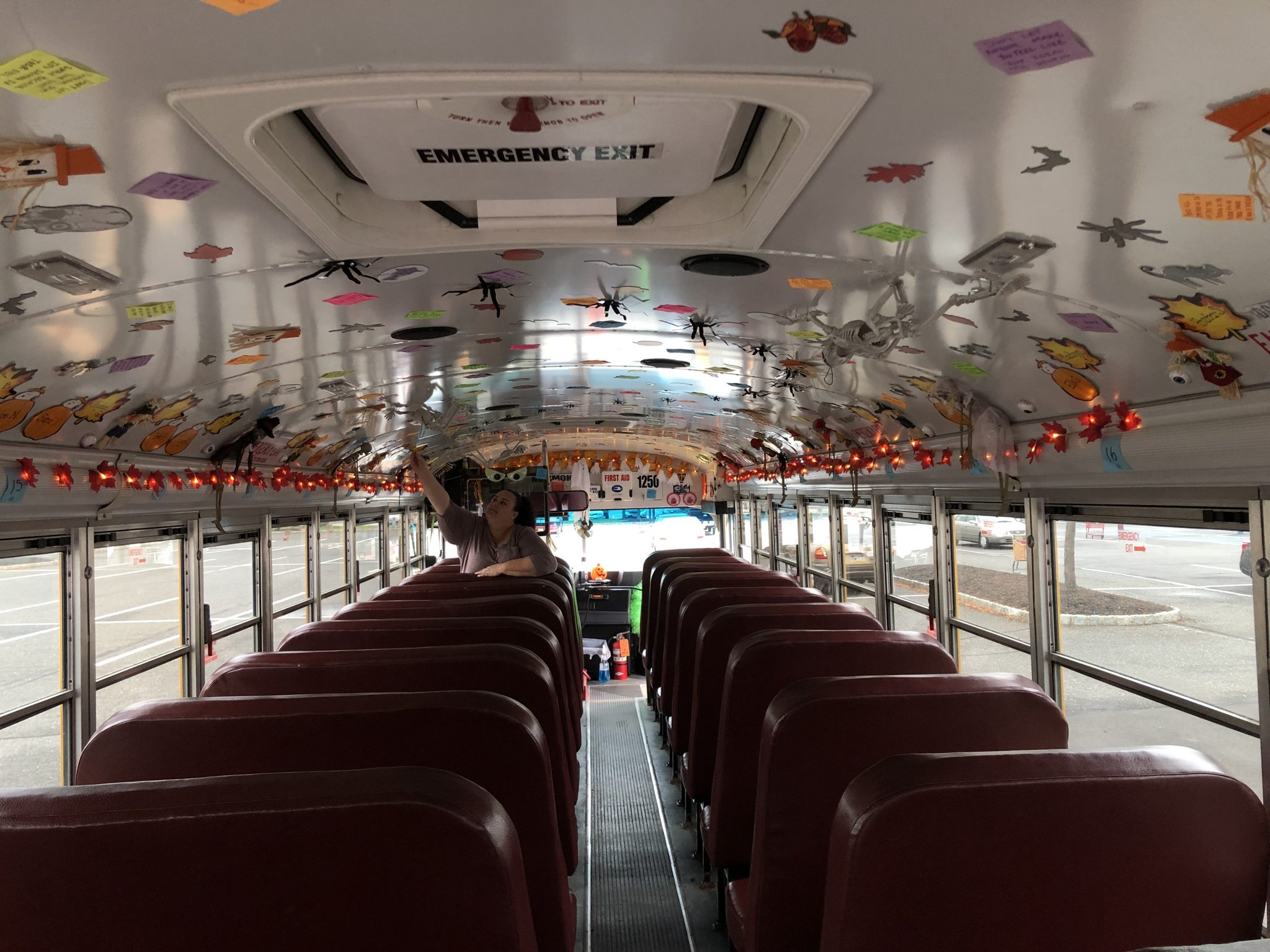 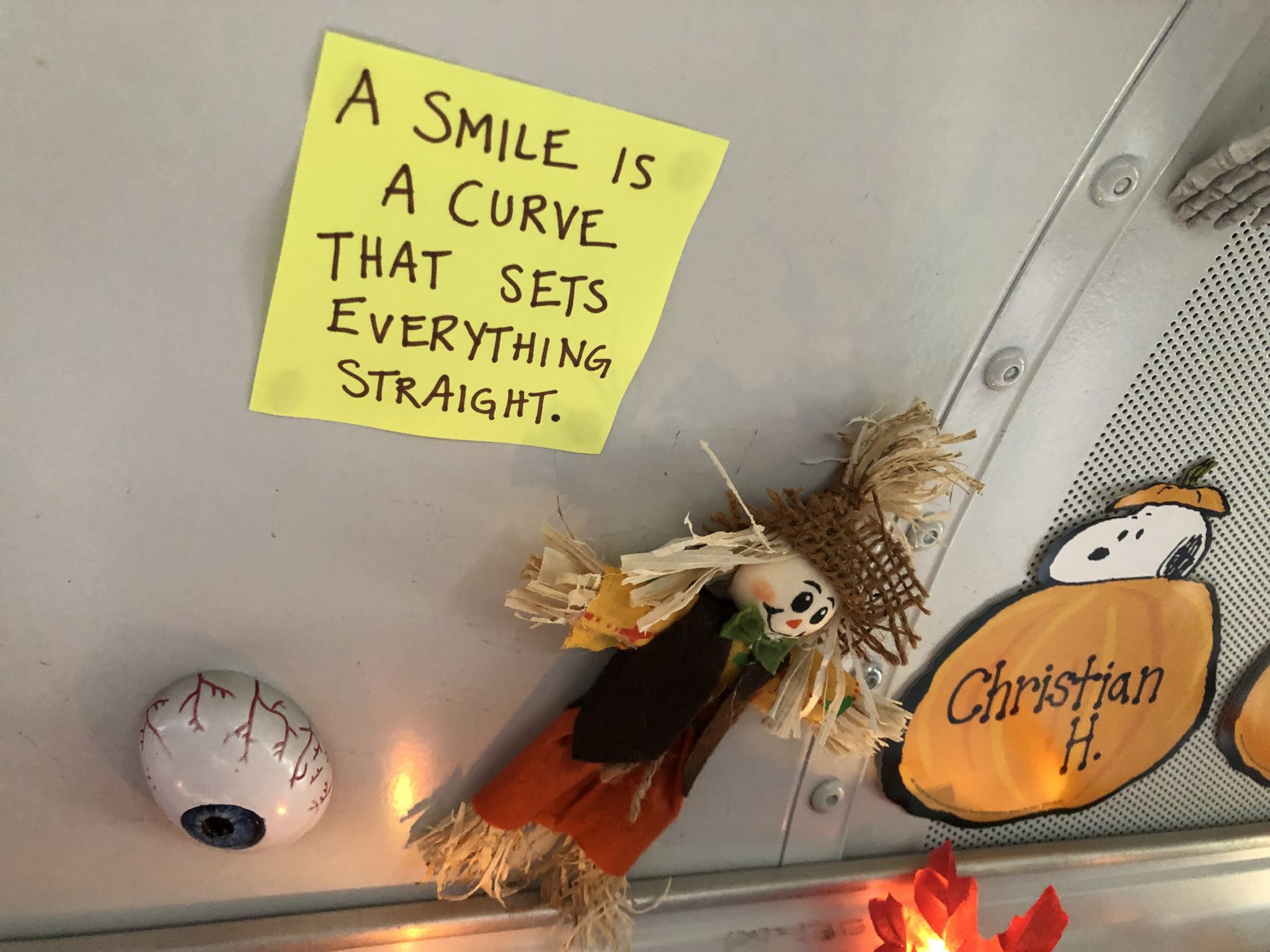 A school bus driver in Hazlet is going the extra mile for her young passengers.

Kari Keppler, who transports children to and from school in Hazlet, has been making students smile each time they board “the fun bus,” or as Keppler refers to the vehicle, her mobile “office.”

Adorning the ceiling of the bus are positive messages and whimsical mantras Keppler has placed there as reminders for the children to smile and be kind to one another.

In 2014, after she read about a young woman who was bullied in high school, Keppler was inspired to promote positivity and kindness among the children and adolescents who were passengers on her daily routes.

“I read an article about a girl in Canada who was bullied in school. Her locker was broken into and some girls took her tablet and (hacked) her Facebook page to say nasty things. (Those girls) told her she should just kill herself. Instead of getting upset, the student distributed positive messages on sticky notes throughout her school,” Keppler said.

Keppler said the student was reprimanded by school administrators and suspended for littering. Several parents learned she had been suspended and created a Facebook page to support the young woman’s kind initiative.

After reading the article, Keppler decided to promote kindness in her own world.

Keppler, who transports students in grades one through 12, said children and adolescents are sometimes cruel to one another. She said she immediately addresses negative remarks when she hears them on her bus.

“Sometimes kids will bring something that happened at school onto the bus. I say, ‘that’s it. Leave it at the door. You’re not bringing that (negativity) on the bus.’ … When you look at some of the school shootings that occur, you wonder, ‘what did that kid go through that made them want to kill people?’

“How can you stop something like that before it gets to that point? If one kid could see a note in the morning, even if they had a rough morning, that could change their whole attitude,” Keppler said.

Keppler, who derives inspiration from her surroundings, has included phrases such as “It’s hard to beat a person who never gives up” and “A smile is a curve that sets everything straight.”

She recalled one occasion when she used a restroom at a nearby high school. The phrase “Be a Fruit Loop in a world of Cheerios” was written on a stall. She wrote down the phrase and displayed on the ceiling of her bus.

“It’s the high school kids I drive on athletic trips, who are the students I don’t take every day, they love (the notes),” she said, adding that the older students will often read the messages out loud to one another.

Other than posting positive messages, Keppler decorates her “fun bus” for holidays. Each passenger in elementary school and middle school has their own magnetic name plate above their seat.

In December, Keppler changes the location of her mischievous Elf on the Shelf, named “Cornelius,” each day of the week. Last year, Keppler said, she engineered a zipline made from fishing line so the doll could fly down each time the bus accelerated.

The children love it, she said.

“The high schoolers don’t really talk to me, but I know they are reading the notes,” Keppler said. “There are a few kids who will take pictures of them, but not say anything. I’m sure they appreciate (the notes).

“I love it when they read the notes out loud. I love when students read (the notes) to each other. That means someone is actually seeing them … that makes me happy,” she said.

On Feb. 20, Keppler’s bus carrying several kindergarten pupils was involved in a collision. All of the children were OK, but the vehicle sustained major front-end damage and was out of service until September.

In the interim, Keppler explained, that she drove a different bus that did not have decorations or notes. She said the children noticed and she eventually did some light decorating, but it was not the “fun bus.”

The youngsters appreciated their “fun bus” that much more after losing it for seven months.