Manners expert educates residents about etiquette in the Gilded Age 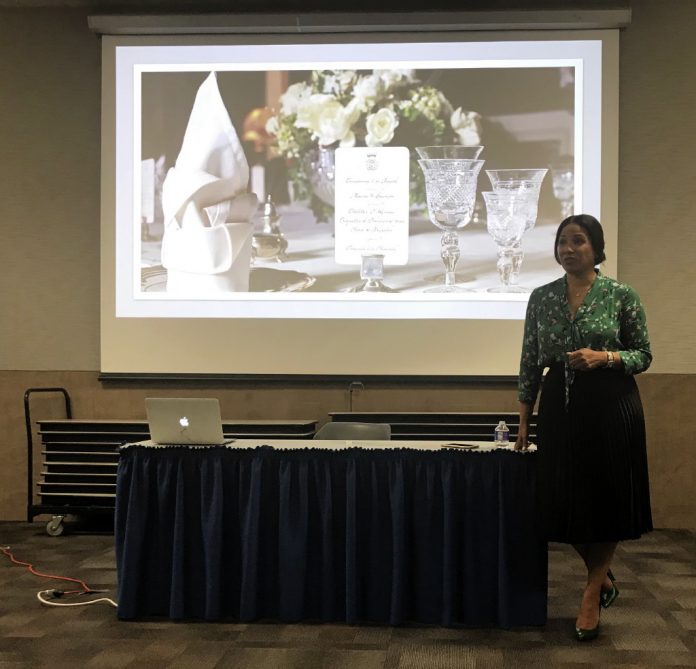 EAST BRUNSWICK–Educating residents about manners and social norms established during the late 19th century, Mary Harris spoke about etiquette during the Gilded Age.

Having been an etiquette educator since 2004, Harris said she offers specialized etiquette training at colleges, organizations and businesses. She is also the founder of Mary Harris Events, where she designs and produces events in unique locations for corporate and social clients.

“Etiquette has always been an interest of mine. … I found my mom’s etiquette book from her high school from 1955 when I was in middle school and I just poured over it. I loved how organized everything was,” Harris said. “I guess I’m a rule follower because I love the rules. I loved how it’s very clear that if you were raised in Ohio or raised in Kentucky … chances are in that era everybody was doing the same thing.”

More than 20 residents listened to Harris during a presentation last month at the East Brunswick Library.

Harris said the Gilded Age took place after the Civil War during the 1870s to 1913. Building large luxurious estate throughout New York, some of the most notable people included members of the Astor, Vanderbilt, Morgan and Rockefeller families.

“The Gilded Age is probably my favorite [time period] and I don’t know I think a lot of us are very attracted to that time period,” Harris said. “I don’t know if it’s the money, the glitz, the glamour, it was before income tax so after 1913 when income tax showed up it kind of plateaued and then declined.”

Emulating their rules of etiquette from the British, Harris said the wealthy of the Gilded Age used British etiquette rules from the 1820s to 1830s; however, they made some interpretations of their own.

“[The rules] were so complicated that if you were not raised in it, you couldn’t figure your way through. … So, for instance, if you came to my house for dinner, I would expect to see you back at my house within two weeks,” Harris said. “If you didn’t come and I invited you and you’re weren’t able to make it, you would have to be there within one week.”

Harris said if anyone did not follow the rules, his/her reputation would have been ruined. Particularly for women, if her reputation was ruined her eligibility for marriage was destroyed.

If you were invited to a ball during the Gilded Age, Harris said people would reply promptly once they received a hand-delivered invitation from his/her hostess. It was considered very rude if someone did not reply promptly.

Once guests would arrive at the hostess’s mansion, Harris said the hostess would have four rooms for her guests, which would include two dressing rooms for the men and women, a reception/drawing room and a dining room.

Providing dressing rooms for guests was important, Harris said because women “really had to dress and fix their hair, you know how elaborate the women’s clothes and hairstyles were and also the streets of New York were literally filled with tons of manure and dirt and the streets were not paved so it was a mess. So they would have on boots and big cloaks. They were suited up because the carriages were not heated.”

Harris said a woman would never go to a party unescorted and would always be accompanied by a gentleman or her family; however, a man could attend a ball unaccompanied.

With galas starting at 11 p.m., Harris said guests would eat very late and dinner would sometimes not be served until midnight. So, guests would never be late because that meant that they would be holding up the entire dinner.

Being that it was stylish to eat French food, Harris said all of the food menus were hand-written in French and usually consisted of five to six courses. Each course ranged from green turtle soup to caviar to lamb chops.

Using seating cards to show guests where they would sit, Harris said that back then it was rude to move your seating cards and it is still considered rude today.

“Americans still use seating cards … and I hate when people do this at my weddings, is come up and move the cards to where they want. Your hostess spent a lot of time painfully deciding who would really enjoy one another for that evening and that’s where they want you to sit.”

Harris said a gentleman had to wait to be introduced to a woman, a woman would never go up to a man and introduce herself. Men and women were never alone; even if someone were engaged their betrothed would meet them at the party.

“Everything was very restrained. If you can imagine what they were wearing, imagine their emotions. It was very restrained, you would never show affection,” Harris said. “Even a husband and wife would never show affection and you would never kiss on the street, it was considered vulgar back then. So there was no holding hands, especially if you were courting. There might be a little kiss before the engagement just to seal the deal but that’s was it.”

Physical contact amongst people in the Gilded Age was minimal, Harris said, because people were afraid of disease given around this time period there was the Spanish flu, influenza and getting a cold back then was very bad.

In terms of dancing, Harris said women would have dance cards, which were little books she would wear on her wrist, and if a man wanted to dance with her he would write his name in her book. It would be very bold to dance with someone twice at a ball, Harris said.

Establishing etiquette rules to follow in the presence of a lady, Harris said that men would never smoke and/or use foul language if they were around women. Men would always remove their hats and would tip his hat in passing if he was outside around women.

Harris said the rules of dining etiquette have not changed that much since the Gilded Age. It someone is at dinner people don’t chew with their mouth open, their napkins stay on their lap, they don’t eat with their fingers, and when they use eating utensils they start from the outside in.

Harris said even though some other etiquette rules are no longer done, variations of them are still being used in various social settings today.