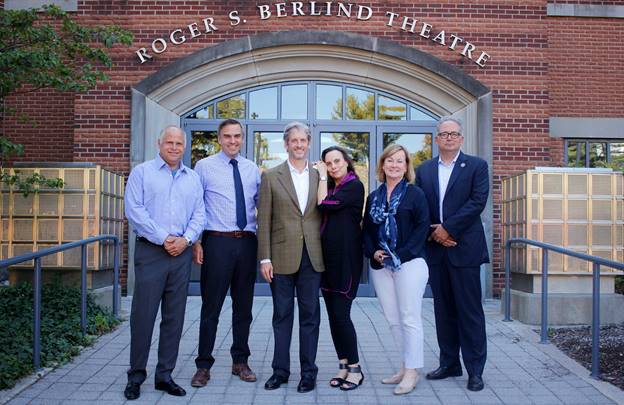 At its first meeting of the 2019-20 season, McCarter Theatre Center welcomed seven new members to its Board of Trustees.

These leading community volunteers join an existing team of trustees who are outstanding arts advocates.

All support McCarter’s mission of creating world-class theater and presenting the finest performing artists for the engagement, education and entertainment of the community.

Joining the board are:

McCarter’s Managing Director, Michael S. Rosenberg said, “Emily Mann, Bill Lockwood and I welcome these seven extraordinary individuals to the McCarter Board. Their experience and expertise will be invaluable as we work to build on McCarter’s storied legacy. Each of them has been involved with transforming companies, leading people and increasing community impact.”

Ronald S. Ward is Vice President of Operations and Process Improvement at Origlio Beverages, a privately owned bottling and beverage company. Originally from Pittsburgh, PA, Ron is a United States Air Force Veteran. Since his honorable and decorated time in the military, Ron has worked in Senior Leadership Roles at Medco, Merck, and Mercedes-Benz of North America. While serving in the military, Ron earned a B.S. from Southern Illinois University, and a M.S. from Central Michigan University. While at Mercedes-Benz, he earned a JD from Rutgers School of Law, Newark. Ron also holds Lean Black Belt, Ratio Analysis and PMP certifications from Villanova University and MIT while owning two active patents.

Elizabeth McNeilly is a Senior Director of Wealth Management with BNY Mellon Wealth Management. Betsy is a Certified Financial Planner with an MBA in Finance from NYU and 30 years of related experience in wealth management. Elizabeth is on the board of several area non-profits, including the Rutgers University Foundation and Princeton Area Community Foundation. She lives in West Windsor and is deeply connected to the area’s Innovation Economy.

Duncan MacMillan is returning to the McCarter Board McCarter Trustee and long-time major supporter of the theatre. Duncan MacMillan is a partner and founding member of Bloomberg L.P. Previous positions include Programmer Analyst for Bankers Trust and Program Manager for Salomon Brothers. Duncan received his B.A. in Mathematics from Rutgers College, an M.A. in from Fordham University and a M.BA. from NYU Graduate School of Business. He has served on many boards including the Princeton Hospital Board, the Cancer Institute of New Jersey and Corner House in Princeton.

Jamie Herring is the owner of Herring Properties, a local real estate development company. Herring Properties owns several buildings in Princeton, including buildings on the old hospital site, which are occupied with a variety of restaurants, retail and office space. Herring Properties also owns or manages several large facilities and warehouses in the area. Recently Mr. Herring assisted in developing an innovative warehouse space for Urban Outfitters. Jamie and his wife Kathy have a deep appreciation of McCarter and have been long time subscribers and supporters of the theatre across theater series, presented series, and the annual Gala.

Jay Dominick is Vice President for Information Technology and Chief Information Officer at Princeton University. Prior to joining Princeton University, Jay served as Vice Chancellor for Information Technology and CIP at UNC-Charlotte and prior to that held similar roles at Wake Forest University, where he was the first CIO. Jay has served as an officer in the US Air Force and has taught courses in IT and telecommunications. He holds a Ph.D. in information and library sciences from the University of North Carolina in Chapel Hill and a master’s degree in national security studies from Georgetown University as well as an MBA from Wake Forest.

Brent Colburn currently serves as Princeton University’s vice president for communications and public affairs. Prior to joining Princeton University, Colburn worked as the vice president of communications at the Chan Zuckerberg Initiative (CZI), Priscilla Chan and Mark Zuckerberg’s groundbreaking philanthropy. A veteran of the Obama administration and multiple political campaigns, Colburn’s previous positions have also included assistant to the Secretary of Defense for Public Affairs at the U.S. Department of Defense; chief of staff for the U.S. Department of Housing and Urban Development; national communications director of the 2012 Obama for America campaign; assistant secretary for public affairs for the U.S. Department of Homeland Security; and director of external affairs for the Federal Emergency Management Agency.

McCarter is supported by contributions from Princeton University, the New Jersey State Council on the Arts, corporations, foundations, and from over 2,000 individuals. More at mccarter.org.