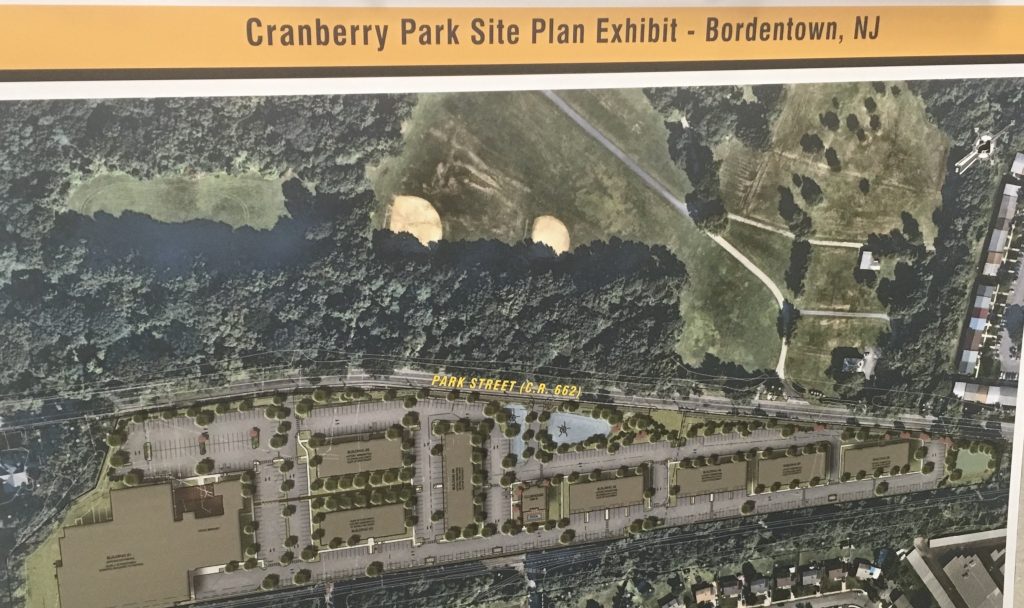 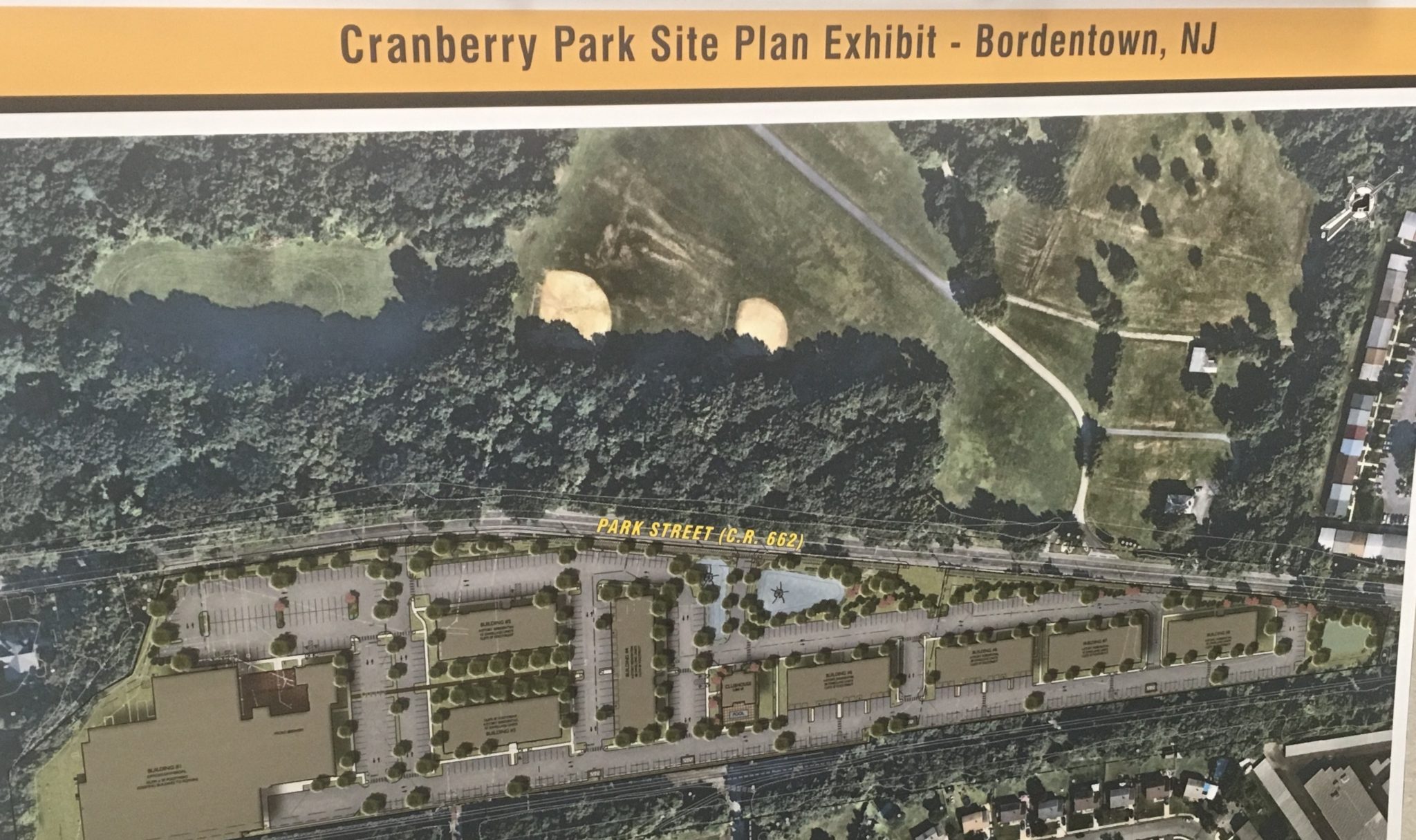 Additional public hearing and testimony on the proposed Cranberry Park, LLC, commercial/residential development for Bordentown City is expected to come to municipal officials again in November.

After the Bordentown City Planning/Zoning Board fielded testimony and public comment for approximately three hours on Oct. 7 for the preliminary and final site plans on the proposed Cranberry Park, LLC, commercial/residential development, the board has scheduled another meeting for additional testimony and public comment on the project for Nov. 4 at 7 p.m. at the Carslake Community Center.

The October meeting held discussion among the applicant, board members and public for proposed preliminary and final site plan approval for the site of the former Ocean Spray industrial processing plant on East Park Street in Bordentown City.

With more than 50 members of the public present at the meeting, board chairman Daniel Kennedy explained to the large crowd that this was the first time the board had been approached with “a project of this scope.”

The proposed project is currently headed by Daniel Popkin of Modern Recycled Spaces who was present at the meeting along with multiple members of his professional staff to provide testimony in seek of approval for preliminary and final site plans, a variance for an existing condition, waiver relief and a general development plan approval in connection with a portion of the property formerly consisting of the having frontage on East Park Street and bordered by the rail line to the east.

Popkin opened the meeting with a brief overview of the property’s history as well as his professional experience in commercial development. He explained that he has approximately 30 years of experience in developing “real difficult” projects, primarily in Mercer, Hunterdon and Middlesex counties. He was also a part of the site’s “Steering Committee” for Bordentown City in 2016 when city officials laid out their initial ideas for the property in a “Redevelopment & Linkage Plan Study.”

“I’m always nervous at the beginning of a project, and it’s no secret that I’ve been doing this with the city for five years,” Popkin. “I take it very humbly and seriously.”

Although Popkin expressed his content for the area and described it as what he felt would be a “transformative and new project” for Bordentown, he admitted that the scope of it poses potential obstacles.

“I have said this on several occasions and I will say it again tonight – I can get the approval, but I can’t promise I can do this project,” he said. “This is not easy. It depends on interest rates, the economy and a bunch of items, but I certainly hope I can pull it off.”

The proposed property is situated in the city’s commercial industrial zoning district and is also part of a redevelopment plan of Bordentown City set forth by an ordinance adopted on April 11, 2016.

The property is approximately 14.82 acres and is currently being used for industrial, warehousing and distribution purposes. Popkin said that his current proposal is to remove all of the existing buildings on site with the exception of a building consisting of 65,299 sq. ft. to be repurposed for office, retail and commercial uses including an approximate 10,300 square foot mezzanine area for tenant storage.

Popkin also said that the he is proposing to construct 296 residential units (274 market rate units and 22 affordable housing units) among seven buildings, each four stories, a 2,800-square-foot single story clubhouse with a pool, as well as associated site improvements such as parking, drainage facilities and landscaping. 611 parking spaces, which includes 40 garages and 40 driveway spaces have been proposed, as well.

If approved by the city board members, the current proposal said the project would be completed in four phases. For phase one, the construction would consist of two buildings and the east driveway of the property onto Park Street as well as a storm water basin. Two of the buildings are proposed to be four stories and 12,075 square feet each and contain 43 dwelling units per building.

For phase two, the construction of two more buildings is proposed and would include the construction of the central entrance on the property, a clubhouse and storm water basin. These two 12,075 sq. ft. buildings would be four stories each, and each building will also include 12 garage parking spaces and 12 driveway parking spaces, as well as 38 dwelling units per building.

For phase four, this would be repurpose the existing 65,299 square foot Ocean Spray building for office, retail and commercial uses including an approximate 10,300 square foot mezzanine area for tenant storage.

Although the applicant proposed to hold off on the renovation of the Ocean Spray building for commercial use until the final phase of the project, planning/zoning board member and former city mayor Joe Malone, expressed a need toward the community for it to potentially be developed earlier in the project schedule if approved.

“From the consensus of what I have heard from the public, is that they would like to see a commercial and maybe one or two of the residential buildings be in the first phase,” Malone said. “That is something that has been stated umpteen times to me because [Popkin’s] expertise is in commercial. It is not residential. If we wait until the very end whether it’s five or six years for the commercial [use], the very important thing for this community is the commercial aspect of this development.

“If this could be done first, I think it would go a long way in really showing the kind of work that [Popkin] does in commercial, and I think the community would welcome this project a lot more than if we start with just residential,” Malone said.

Although Popkin fielded additional discussion about this topic and that the matter is an “economical question,” Bordentown City Mayor James Lynch said that municipal officials want this project to be built, but a compromise may have to be reached.

“We have a prospect of fear of starting a project that doesn’t come to fruition,” Lynch said.

Branson, a longtime Bordentown resident, explained that because of the area’s ties to the Revolutionary War and other historical connections such as the Joseph Bonaparte Property located adjacent to the Ocean Spray site, that the modern concept design of the apartment buildings would be inconsistent with the culture of the town.

“The commercial space is beautiful […] but the residential portion, I think is so out of character with who Bordentown is,” Branson said. “I’m real concerned that we are not maintaining the character of the town here.”

Following additional testimony among the applicant’s professionals, board and public, a motion was made by Malone and unanimously approved to continue the hearing on this project to the next planning/zoning board meeting.