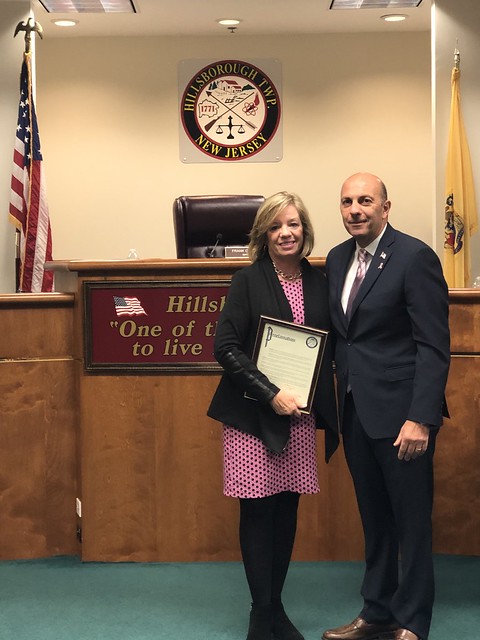 At an Oct. 15 Township Committee meeting, Mayor Frank DelCore and the committee members recognized October as Breast Cancer Awareness Month. Officials said the goal of the month is to increase awareness of the disease, encourage early detection, and support research to find a cure.

The National Cancer Institute estimates that in the United States, more than 268,600 female cases and 2,670 male cases of breast cancer are anticipated to be diagnosed this year.

At the meeting, municipal officials not only recognized this month in regard to the cause, but acknowledged the efforts of the members of one local group, “Dance for the Cure,” for their work in the community.

Kathleen Cirioli, a two-time cancer survivor, and Joanne Liscovitz are co-founders of the nonprofit organization which assists local families that have been impacted by breast cancer.

Officials said “Dance for the Cure” has provided financial assistance to local women with donations totaling more than $600,000 since the group was founded about 20 years ago.

“We urge all women and their families to increase their knowledge about breast cancer and join us to celebrate successes and memorialize lost battles,” DelCore said. “I have had the opportunity to attend the ‘Dance for the Cure’ several times and I can tell you that the work Kathleen and Joanne do to raise money for breast cancer is simply outstanding and we thank you for all of your work.”

Following the reading of a proclamation, Liscovitz shared her experiences in working with the group to combat the disease.

Liscovitz explained Cirioli’s absence from the meeting. Having been diagnosed with lung cancer in July, Cirioli had just finished her third round of chemotherapy and did not feel well enough to attend.

“She is a little under the weather, but if there is a strong person out there, it is [her],” Liscovitz said.

“Our mission is to help breast cancer patients immediately in our area in Somerset, Hunterdon and Middlesex counties. So, when you’re thinking about breast cancer, I hope you are thinking about ‘Dance For The Cure’ because a lot of people like to do pink things during October and throughout the year, and to know that we have a local charity who helps our neighbors directly – I think it makes it a little bit more personal, and you can feel good about your donations going to work right here,” Liscovitz added.

Alongside the municipality’s efforts to recognize the local group, DelCore said he also joined municipal employees during their pink ribbon placing ceremony. Pink ribbons were tied on the trees around the municipal complex in support of “Dance for the Cure” and Breast Cancer Awareness Month. Members of the Department of Public Works showed their support for Breast Cancer Awareness Month by wearing pink safety jackets.