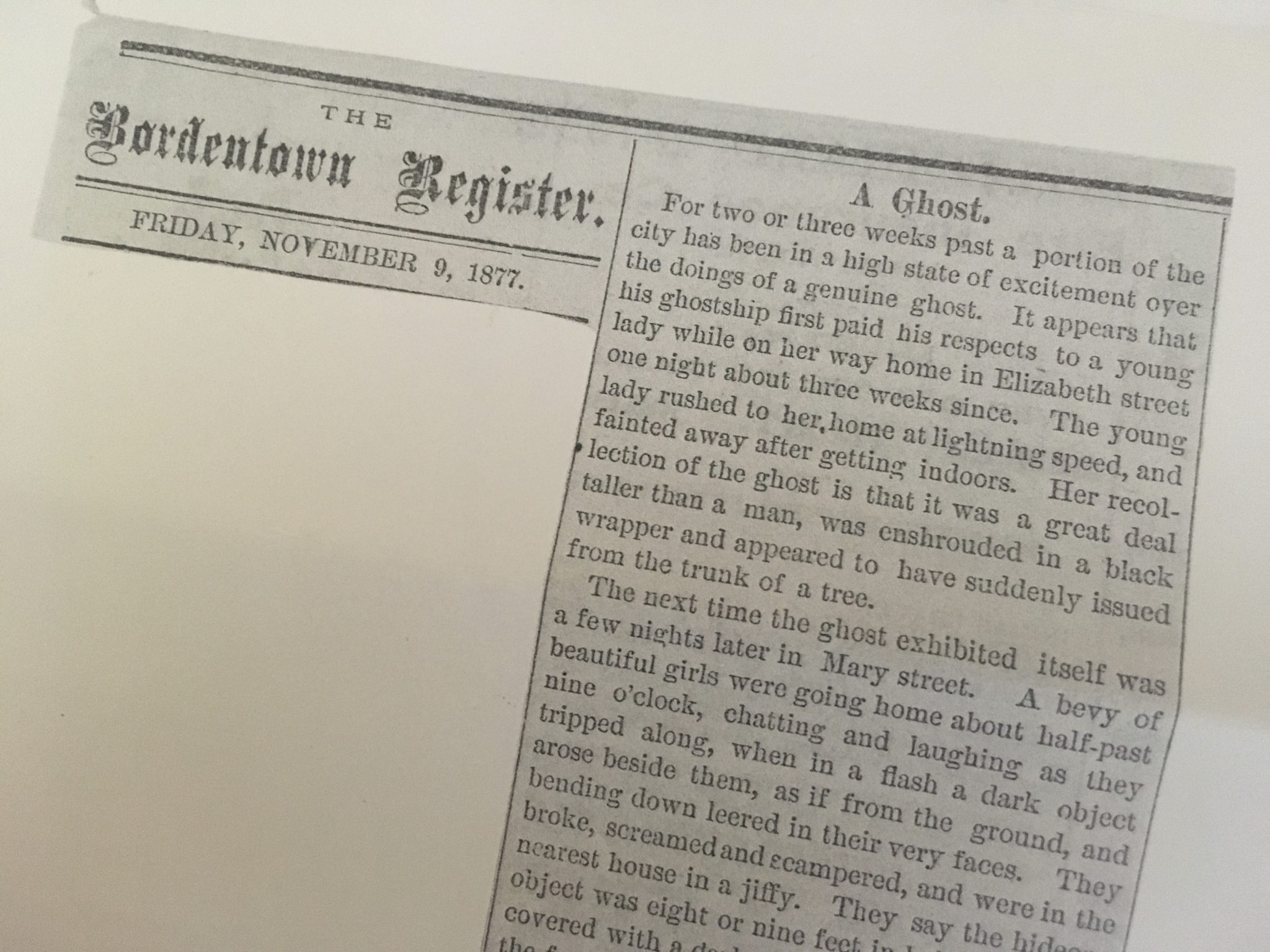 The Bordentown area is well-known for its historical ties to people such as Thomas Paine, Francis Hopkinson, Clara Barton and Joseph Bonaparte, but the small river community once gained national attention in the 1800s for something obscure rather than historical significance.

According to an article published in the original Bordentown Register in 1877, an “apparition” had been witnessed by multiple patrons in the area for approximately three weeks. The article provided multiple witness statements from locals, who described the unknown figure as “a great deal taller than a man” and “was enshrouded in a black wrapper and appeared to have suddenly issued from the trunk of a tree.” Witnesses said they saw the mysterious figure traversing on Mary Street, Elizabeth Street and Crosswicks Street.

The news phenomenon not only captured the attention of locals, but the story, which was published in November 1877, even traveled as far west as St. Louis where the “The Ghost of Bordentown” was mentioned in the St. Louis Globe.

The original Register News article, which was discovered by Bordentown Historical Society Co-President Doug Kiovsky, said he came across the obscure story when he was sifting through a box of archived local newspapers.

Just in time for Halloween, Kiovsky said he felt the local story, which captured nationwide attention, was only appropriate to share this time of year. The co-president explained that right around the time he discovered a local framed portrait of author, Edgar Allan Poe, famous for his short stories and poems that frequently touch upon mysterious and macabre topics, he soon discovered the news article, too.

“I found it very coincidental that I discovered an old framed photo of Edgar Allan Poe covered with dust in the attic of the Gilder House around the same time that I was organizing old newspapers in the meeting house this past spring,” Kiovsky said. “If you let your mind wander, either of those buildings, with their creaky floorboards, could be spooky if you are alone for a good period of time.”

According to other witness accounts in the article, the alleged figure appeared before a group of young women walking on Mary Street at approximately 9 p.m. The witnesses said that in the alleged incident, “a dark object arose beside them, as if from the ground, and bending down leered in their faces.”

“They say the hideous object was eight or nine feet in height and was covered with a dark robe,” the article read.

In a third instance, the article says the figure appeared approximately a week later after the prior alleged occurrence when it “deliberately rose out of the earth and stopped a team going out Crosswicks Street” beside a carriage driver.

According to the witness statement, “The driver shouted murder, the people living near ran out, but by the time they got to the carriage the mysterious object had disappeared as quickly as it came. The horses were standing still, the driver was almost dumb, and about the time he began to recover his senses, the horses suddenly sprang forward and were soon out of sight.”

Although the phenomenon has never been solved or explained to date, the timing of the alleged incidents is peculiar given that this was reported in 1877, approximately 40 years before Halloween, as it’s celebrated in the United States today, became a commercially observed event.

Kiovsky said this leads to much more speculation in the alleged incidents rather than to be simply brushed off as a “hoax” or “trick” played by youths around the fall season.

“I don’t know if the sightings of the Bordentown apparition are true or if somebody was running around playing a practical joke, but as people, we have a natural tendency to be curious and gravitate towards about things that we don’t understand,” Kiovsky said. “Whether it’s in this world or the next.”

The Bordentown Historical Society co-president also explained that the alleged incidents of this local phenomenon parallel similar accounts from New Jersey patrons who claimed to have seen other abnormal figures such as the “New Jersey Devil” in the South Jersey Pine Barrens or the infamous “War of the Worlds” 1938 radio broadcast by actor Orson Welles who reported fictitious incidents of Martians invading Grover’s Mill.

“There was never a conclusion to the apparition sightings,” he said. “But on a dark cold night as Halloween rolls around this time of year like an eerie fog, we can use it as Bordentown’s example to jump out from behind the brushes and scream ‘Boo.’”