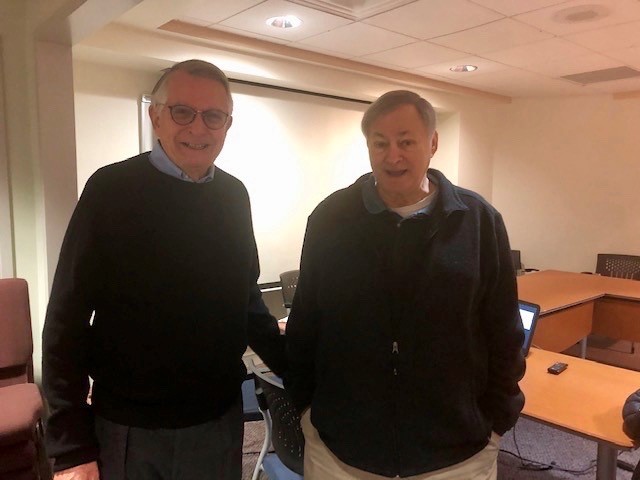 For the past five years, Princeton pediatrician M. David Atkin has been treating dozens of individuals who never cry and actually look forward to a session with the doctor. Furthermore, Dr. Atkin never has had to cajole anyone with lollipops or plastic toys.

His “patients” are Princeton area senior citizens at the Princeton Senior Resource Center at One Monument Drive, and the inoculations he administers are mental ‘shots in the arm’ in the form of information focused on senior health.

Atkin, for 30 years a principal in the Pediatric Group and for 25 of those years the physician who treated my children from birth to adolescence, is now treating area seniors to thought-provoking classes on “Advances in Medicine for Older Adults.”

This eight-lecture course is one of 28 course options within the Evergreen Forum learning curriculum of the Princeton Senior Resource Center. Atkin helps plan and organize the eight lectures featuring renowned medical and science researchers and practitioners. This year, he recruited Dr. John Cotton, Atkin’s former partner in the Pediatric Group, to co-produce this education endeavor.

Even though senior health challenges are obviously rather different from pediatric ones, Dave enjoys interacting with seniors and kids for the same reason.

“Much of pediatric health is listening and learning and teaching, and those are the same elements involved in producing this senior education program. I love doing it – it keeps me young,” said Atkin, who just celebrated his 85th birthday. And yes, like a one year old, he had a seemingly endless celebration with several birthday parties.

He does the Evergreen Forum job as a volunteer, but considers it yet another phase of his non-retiring retirement.

“I have retired three times – I love the parties,” said Atkin, who also loves to work on projects that contribute to the well being of others.

When he retired from The Pediatric Group and had his first retirement party, Atkin, who went to Tufts University for undergraduate and medical school, embraced a second career of working in the field of developmental pediatrics.

After going back to school to become certified in the specialty, Atkin, with two well-known Princeton educators, operated a pediatric developmental health practice for 10 years. He retired from that practice and had retirement party number two.

He then accepted a job offer with the Hunterdon Medical Center Developmental Clinic, where he worked for another 10 years – and enjoyed retirement party number three.

This current retirement, however, is somewhat more legitimate than the first two, because the Evergreen Forum job is unsalaried.

Since I too have an aversion to retirement, I never have had the opportunity to participate in Atkin’s Evergreen Forum lecture series offered only on Monday mornings – or in any one of the other 27 fascinating Evergreen Forum courses, for that matter.  I paid attention to Dave’s program in particular, when I learned that my friend, Princeton audiologist Jane Brady, was invited to lecture at a class that met in September.

Hearing is one of those youth/senior crossover issues. I always had flawed hearing thanks to perhaps many untreated childhood ear infections. My own kids’ incessant ear infections and strep throats, however, never led to a hearing disability, thanks to smart advice and treatment by Dr. Atkin.

I sought the advice of Jane, owner and director of Horizon Audiology, nearly 25 years ago, when she was working at her first job as an audiologist in the same office building as The Pediatric Group. The substance of her Evergreen Forum presentation was that age-related hearing loss is not a benign consequence of aging. Evidence is emerging to support the benefit of audiologic intervention in mitigating the effects of age-related cognitive decline.

Atkin, in his non-retiring retirement, has heard an additional education-related calling. He has become involved in educating and influencing people about the crisis of climate change. He is a member of the Princeton Chapter of the Citizens’ Climate Lobby, a nonprofit, nonpartisan, grassroots advocacy organization working to create the political will for a livable world.

The group, said Atkin, is focused on the passage of a specific piece of legislation and a proven strategy the Carbon Fee and Dividend, the best first-step” to preventing the worst impacts of a warming world. This seems like a very appropriate endeavor for someone who is so active in a program dubbed “Evergreen.”