Facing off against incumbent Timothy Lynch and candidate Cosmo W. Tomaro, Tackacs and Cseremsak won a close race with Tackas securing 1,527 votes and Cseremsak with 1,477. Lynch was not far behind with 1,385 votes, while Tomaro garnered 857.

Tackacs has lived in Hopewell Township with his wife and two sons for the last 14 years. Tackacs is currently a 23-year professional firefighter in Trenton. He is currently the fire battalion chief assigned to the Third Battalion in command of all administrative and fire/rescue operations. His volunteer fire experience extends to 1989 when he became a junior firefighter at age 16 with the Pennington Road Volunteer Fire Company in Ewing Township. He remained an active member at Pennington Road up until 2005, after becoming a life member.

“I’ve been fortunate enough to have been chosen by the board two times over the past three years to fill in for a fire commissioner vacancy,” Tackacs said. “Through this experience, I was given the opportunity and insight on how important it is to have open-minded qualified individuals to serve in these positions. My drive to become involved to public service began at a young age. My drive to public service is to ensure accountability here in Hopewell Township. As a fire commissioner, we should be held accountable to ensure that safety of our community is paramount.”

Cseremsak has served as a Hopewell Township Fire District No. 1 fire commissioner since 2007. Cseremsak has also worked with the Hopewll Township Police Department as a patrol sergeant and traffic sergeant from 1987-2006. He is currently a special law enforcement officer for the Lawrence Township Police Department, while being a public safety officer for the Institute for Advanced Studies. 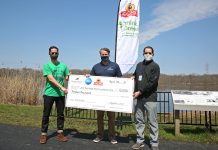