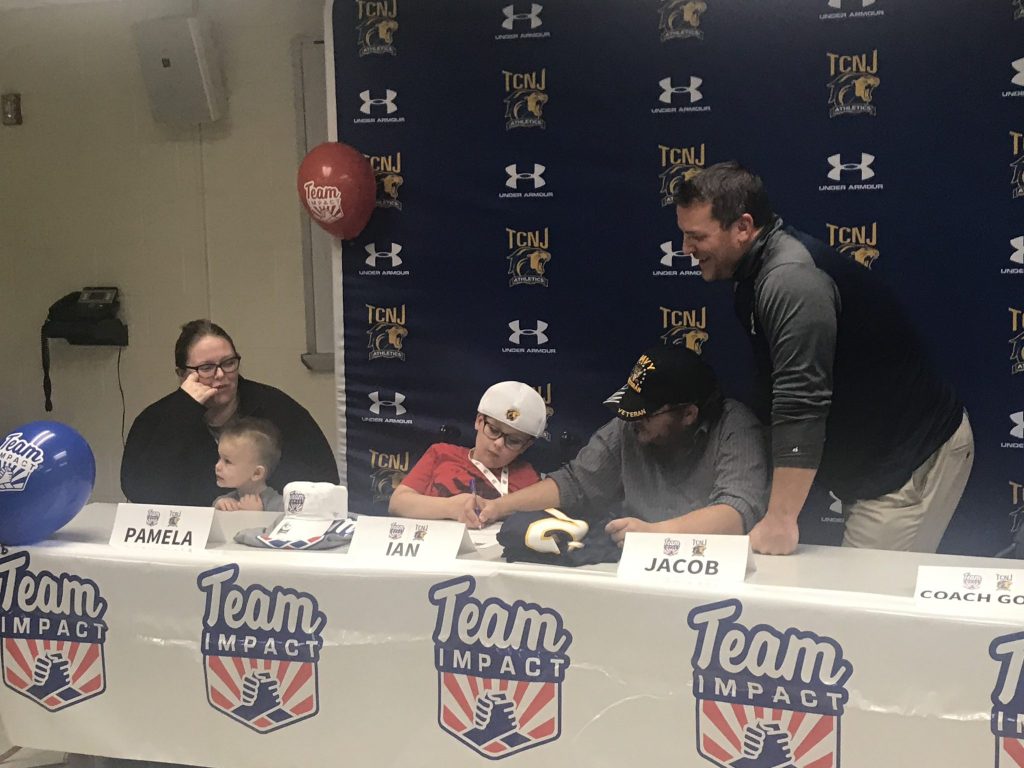 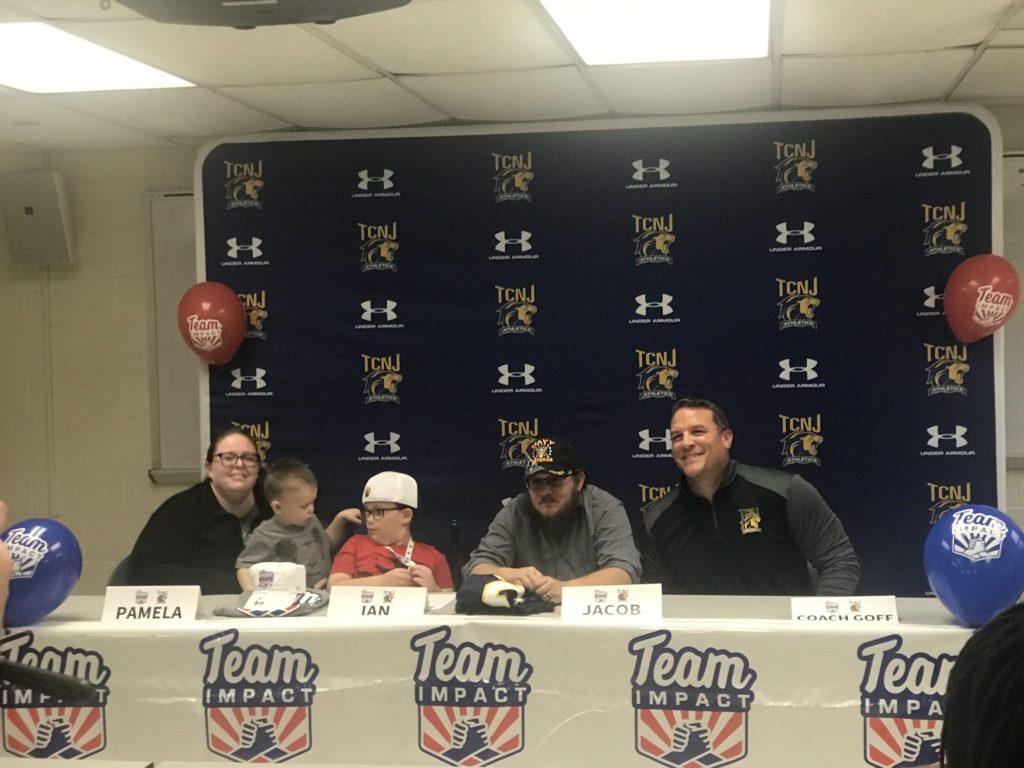 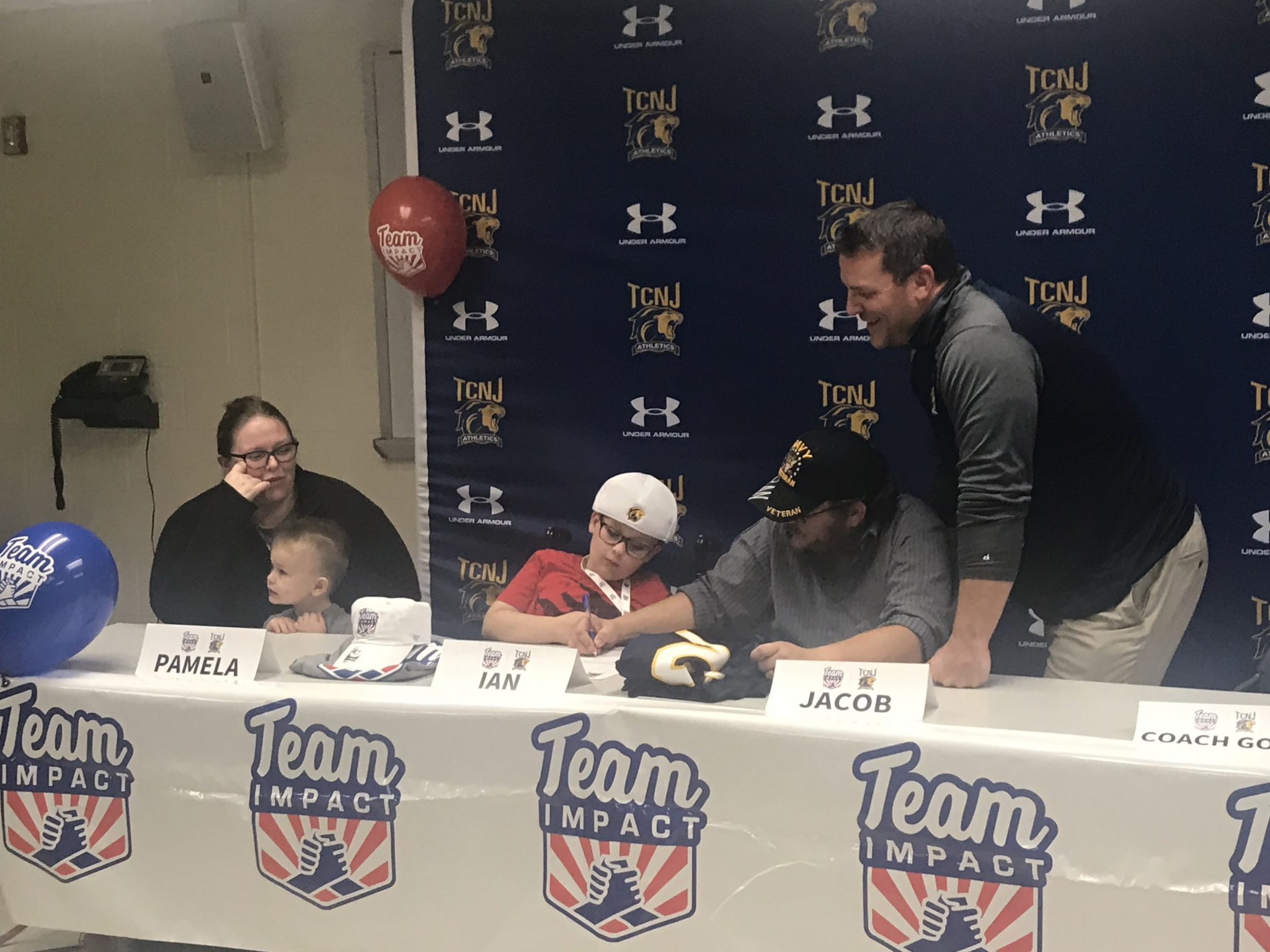 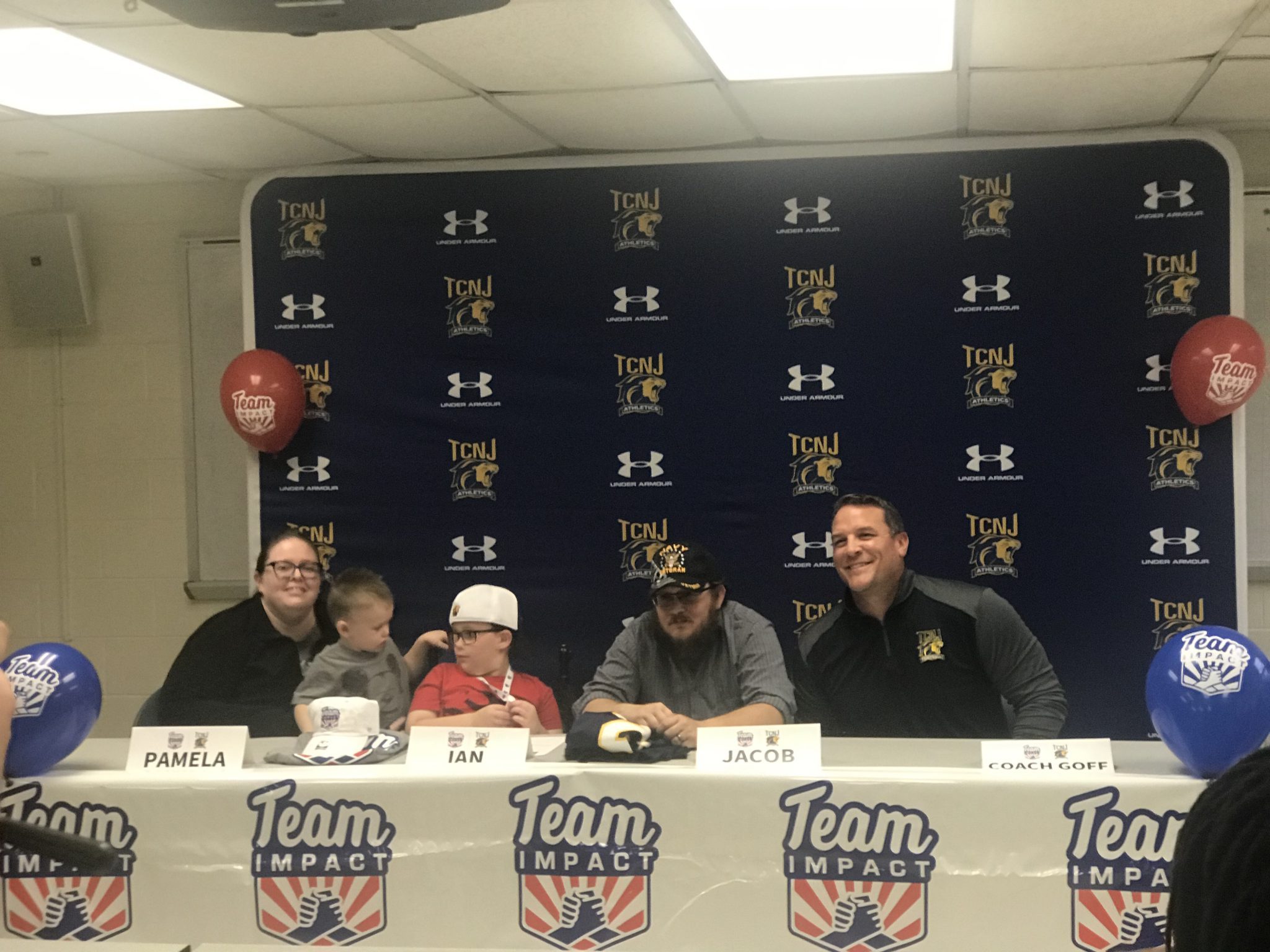 A seven-year-old boy has already signed on to become a member of The College of New Jersey (TCNJ) football team.

With pen in hand, surrounded by his parents, younger brother, coach Casey Goff and the entire TCNJ football team, young Ian Todd signed his letter of intent and committed himself to becoming a Lion football player on the evening of Oct. 29.

Sponsored by Team Impact, a Boston-based nonprofit connecting children with serious or chronic disabilities with college athletic teams, the event was held in the football team’s meeting room on the college’s campus of in Ewing.

“We are here to celebrate our new interaction with Team Impact for what is a tremendous cause, where they take individuals with disabilities that maybe don’t interact or struggle socially, and they get involved with our team and become teammates and a brother of our team. But what will happen is that [Ian] will help us and help bring things into perspective for our players. It’s a tremendous organization, that we were eager to get involved with,” Goff said.

Ian suffers from spina bifida, a birth defect where there is incomplete closing of the spine and membranes around the spinal cord during early development in pregnancy.

After Pamela Todd, Ian’s mother, was visiting the Children’s Hospital of Philadelphia, she met the parents of another boy who had recently gotten involved with Team Impact and signed with Rowan University in Glassboro.

She immediately spoke with her husband, Jacob, and the two approached Ian and asked if it would be something he would be interested in.

“He had his choice of what sport to pick, what school to go to based off of where we live, and he chose this sport and this college, and it was a pick that we let him choose,” Jacob Todd said. “He could have chosen a spring sport; he could have picked baseball or basketball. With basketball, they have wheelchair basketball leagues, but he chose a sport that he knew he would not be able to fully participate in. But that shows what kind of kid he is, he doesn’t have to be in the limelight or number one; he wants to be a good teammate as well.”

After choosing TCNJ and to be a member of the football team, Team Impact reached out to Goff about the opportunity for Ian and what the football team could do for him. Goff was immediately on board and not only said Ian would be a part of the team this season, but for many years to come.

“Ian is going to be a part of this program for as long as he wants to be involved with us,” Goff said. “He’ll continue to grow with our guys, which is something that we’re really excited about. To be able to build that relationship, we’re going to stay in touch with Ian in the off season – this is not just a thing for show, this is us getting involved in Ian’s life and Ian getting involved in our lives, more importantly.”

Jacob Todd, who played football in high school, said that he was proud of his son for choosing the football program and looking forward to the experiences that he’ll encounter when being a part of the team.

“It’s something that I think Ian will get a love for, even though that it’s not one of those things that he will be able to participate fully in as a player,” Jacob Todd said. “I hope that he does develop that love for the game. He does play sled hockey, but [football] was my first introduction to teamwork and a family outside of your everyday family.”

Goff, who has already brought Ian to some football practices, said he plans to invite him to every game and get him involved with other campus events.

“We’ll just bring him on campus and give him the opportunity to hang out with our guys and get him involved with our program,” he said.

Gavin Livep, a linebacker on the football team, is also a part of the Team Impact lead team that will work with Ian and help him get acclimated to being a team member.

“Basically, it’s a group of us that Coach Goff picked to spearhead this initiative,” Livep said. “We bring Ian around, show him what we’re all about and really introduce him to our program. We’re having a blast, it’s really awesome. He’s really energetic and we really look forward to feeding off of his energy. We’re really inspired by him.” 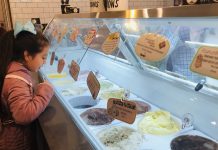 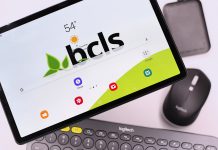 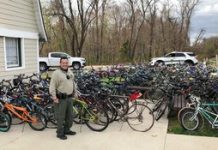