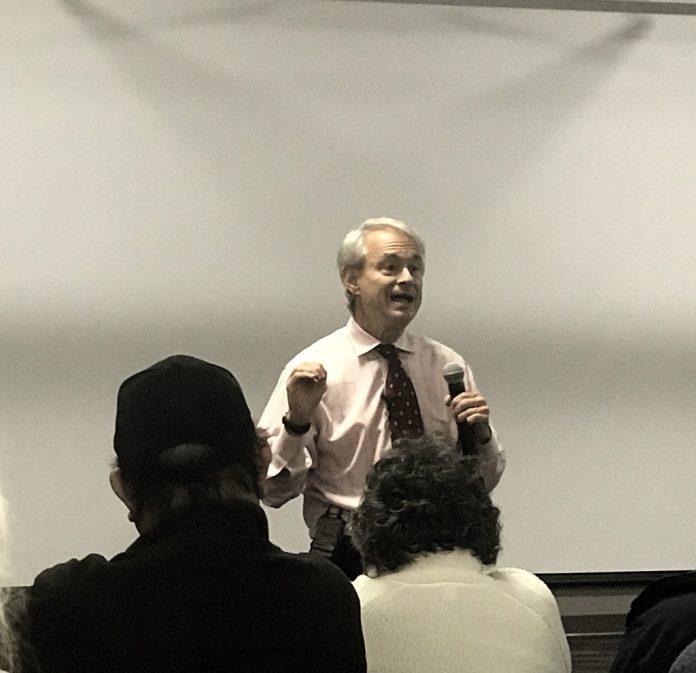 EAST BRUNSWICK–Seeking to educate residents about the usage of cannabis for medical reasons, Dr. James Salwitz recently held a “Medical Marijuana: Benefits, Use and the Law” forum.

Salwitz is an oncologist and hematologist at Regional Cancer Care Associates’ (RCCA) Central Jersey division. He sees patients at RCCA’s offices in East Brunswick and Somerset.

“As a medical oncologist, people often say, ‘How can you do that, it seems like a really depressing job?’ And the reality is that … it’s not a depressing job for a whole bunch of reasons,” Salwitz said. “One of the main reasons is that you get to live and serve in the community year after year, decade after decade, and watch the community grow and change.”

More than 50 residents listened to Salwitz talk about the benefits of medical marijuana and how it is used to treat symptoms for various diseases and disorders on Oct. 17 at the East Brunswick Library.

Being one of the oldest medicines in the world, Salwitz said that historians know that marijuana was being cultivated for fiber and medical usage at least 10,000-12,000 years ago.

One major reason why marijuana usage vanished in the United States, Salwitz said, had to do with racism that was projected by Harry Anslinger, former commissioner of the U.S. Treasury Department’s Federal Bureau of Narcotics.

“So marijuana was in use in this country from about 1860 to about 1920 and was generally in the oil form, but between 1910 and 1920 approximately 1 million Mexicans fled into the southern states,” Salwitz said. “At the same time period, African Americans from the southern states started to migrate north and those populations smoked marijuana. … Along came Harry Anslinger, [who] was … put in charge of Federal Bureau of Narcotics and Anslinger was a racist. Anslinger wanted a way to target this population so he then started a large push back against smoking marijuana.”

Salwitz said Anslinger was behind the movie “Reefer Madness” and he started an anti-marijuana revolution that took off massively, and by the 1920s multiple states passed laws saying that marijuana was dangerous, and caused criminality and violence.

In 1937, Salwitz said the Narcotic Tax Act was passed which made marijuana illegal across the United States, and in 1970 President Richard Nixon classified marijuana as a schedule one drug.

“All drugs are classified from one, two, three and four. Drugs in category four are the Tylenol you buy at the pharmacy and drugs in category one is heroin, crack and anything that is highly lethal and addictive,” Salwitz said. “Once it was classified in the one category it was pushed deep underground. You could not study, do research on it, possess it.”

From the start, Salwitz said this has been a good program for his patients and that his patients have benefited from being able to have access to medical marijuana.

“Now what has changed in the last few years is that the original five conditions have now broadened out to 18,” Salwitz said. “So now presently there are 18 indications for marijuana in the State of New Jersey and they include the obvious things: cancer, HIV, multiple sclerosis (MS) and any kind of pain that you can imagine. The number one indication on the list is anxiety.”

Medical marijuana is great for any form of neuropathic pain, such as pain that comes from shingles or after chemotherapy, according to Salwitz.

“We have seen patients with horrendous neuropathic pain on their faces go back to work. We see people dealing with a cancer diagnosis are able to get out and get moving. I have seen people with MS that are able to function and get going again,” Salwitz said. “This makes a tremendous difference for our patients. Does it work for everybody? No, but a remarkably high period of the time.”

Salwitz said the law was upgraded even further in July of this year, making it easier and more legal to get alternative forms, such as gummies, oils, etc. The new law also opens up new licenses and splits up the need to grow, process and sell marijuana on one site.

Once a patient is registered by their physician, Salwitz said he/she has to register himself/herself by filling out a form online to show that he/she lives in New Jersey. Then he/she will get a card in the mail.

When a patient gets his/her card in the mail, Salwitz said patients must call a marijuana center and make an appointment to meet with a marijuana counselor to walk them through the process. This is a cash-only business, so depending on how much a patient uses it can run them $100-$150 per month.

With marijuana still being classified as a category one drug, Salwitz said doctors and scientists still cannot do thorough research on marijuana, which means that they still do not completely understand how all the components work.

Salwitz said marijuana is an incredibly safe component, not addictive and a person cannot overdose; however, everyone is different and it doesn’t mean someone can’t have a bad experience.

Salwitz said patients use medical marijuana in any form, but smoking is the best method because it will take effect in about four minutes.

“If I had two substances and one can give you cirrhosis of the liver, cancer, dementia and multiple other medical problems, and you can overdose on it, and it’s highly addictive … and the other one was not additive, you couldn’t overdose on it, it doesn’t interact with any other drug and it’s only major side effect is that it might get you high, which one would you legalize? Obviously you would legalize alcohol, but marijuana is the one that is illegal.”