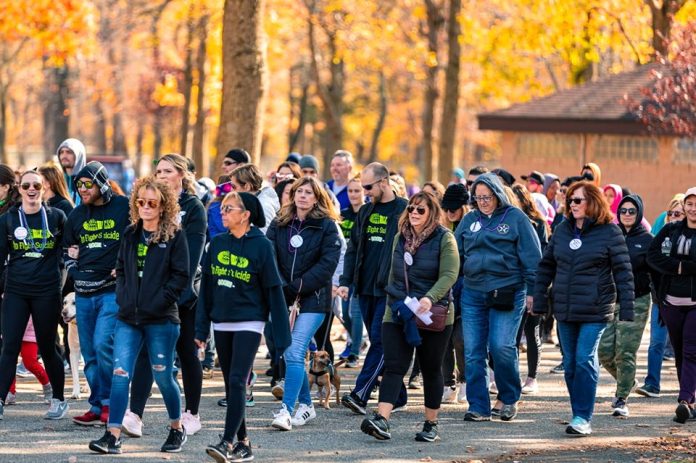 JAMESBURG–More than 490 locals came together to participate in the American Foundation for Suicide Prevention New Jersey Chapter’s (AFSP) Out of the Darkness Community Walk.

AFSP New Jersey Area Director Elizabeth Clemens said that the AFSP was established in 1987 as a voluntary health organization that gives those affected by suicide a nationwide community empowered by research, education and advocacy to take action against this leading cause of death.

“The core of the Out of the Darkness Walks, [is that] the community walks created a movement,” Clemens said. “Held in hundreds of cities across the country, they give people the courage to open up about their own struggle or loss, and the platform to change our culture’s approach to mental health.”

Clemens said that the Nov. 3 walk finished the chapter’s 2019 New Jersey Community Walk season. The AFSP’s New Jersey Chapter had 15 walks take place over a seven-week period, all throughout New Jersey, and will raise close to $1.1 million this year.

“AFSP is dedicated to saving lives and bringing hope to those affected by suicide,” Clemens said.

Clemens said that AFSP creates a culture that’s smart about mental health by engaging in the following core strategies:

To participate in a community walk, Clemens said that there is no fee to walk in the chapter’s walks but fundraising is encouraged.

Each dollar raised helps deliver suicide prevention programs and enables AFSP to hold educational programs throughout communities on suicide prevention, advocate for public policy changes, hold survivors of suicide loss day events across the state, and contribute to more than $5 million in much needed scientific research grants awarded by AFSP on a national level, according to information provided by AFSP.

Clemens said the chapter’s walk season takes place in the fall, so next season will begin in September 2020.