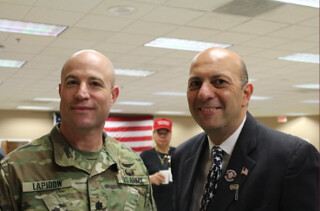 The Hillsborough Township municipality is set to serve as the host to a special event to honor local military veterans.

Municipal officials announced that the guest speaker for this year’s event is Lieutenant Colonel Jonathan S. Lapidow, who recently retired after 30 years of service in the United States Army.

Hillsborough Township Mayor Frank DelCore expressed his anticipation for the event in a recent statement.

“It is an absolute honor to celebrate our veterans and we invite members of the community to observe the Garden of Honor ceremony,” DelCore said.

Lapidow is a lifelong New Jersey resident and a Hillsborough High School graduate. He also holds a B.A. in economics from Rutgers University and a Master of Science in Homeland Security from Thomas Edison University. He was commissioned as an officer in 1993, after four years as an enlisted soldier.

During his 30-year active-duty career, Lapidow served in various positions with the New Jersey National Guard. Some of those highlights included his role as the Headquarters Commander, the Plans Officer, and a Blackhawk mission pilot for the 1-150th Air Assault Battalion, as well as being the New Jersey Counterdrug Task Force Commander. He also served as an instructor for the Rutgers ROTC Program.

Lapidow’s officer career field is aviation and has served most of his career as a U.S. Army Helicopter Pilot. He is qualified in the Kiowa, Cobra, Apache and Blackhawk helicopters. He also planned and conducted multiple combat aviation missions while deployed in Iraq in 2004 through 2005 during Operation Iraqi Freedom.

Municipal officials said the Veterans Day program will include a ceremony at the Garden of Honor followed by a brief reception for participating veterans, their spouses and guests in the multipurpose room where refreshments are planned to be served. In case of inclement weather, officials said the ceremony will be held in the Senior Activity Room.

All those attending are asked to bring a canned good to be donated to the Hillsborough Community Assistance Network. For a list of items that are most needed, visit www.hillsborough-nj.org.