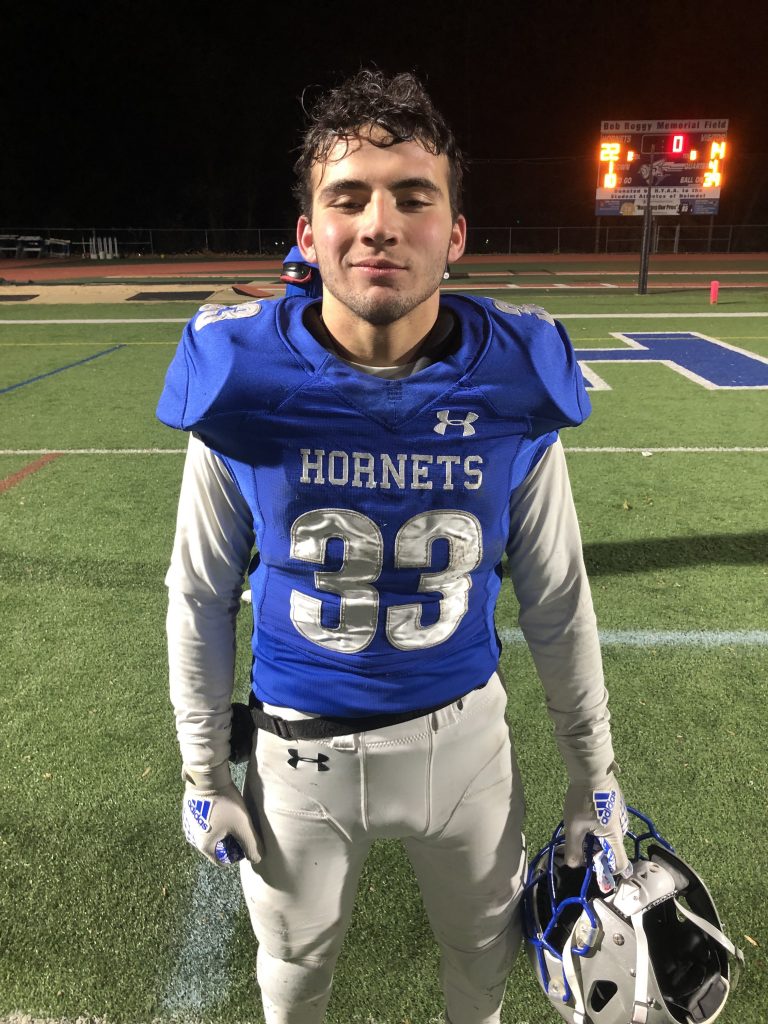 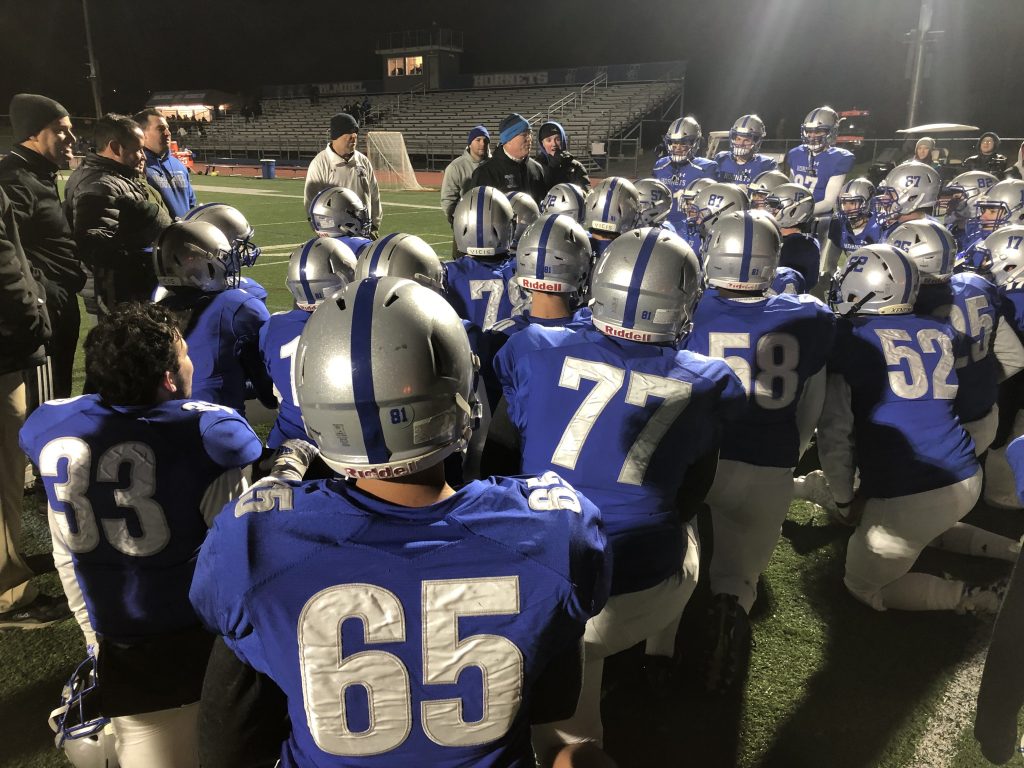 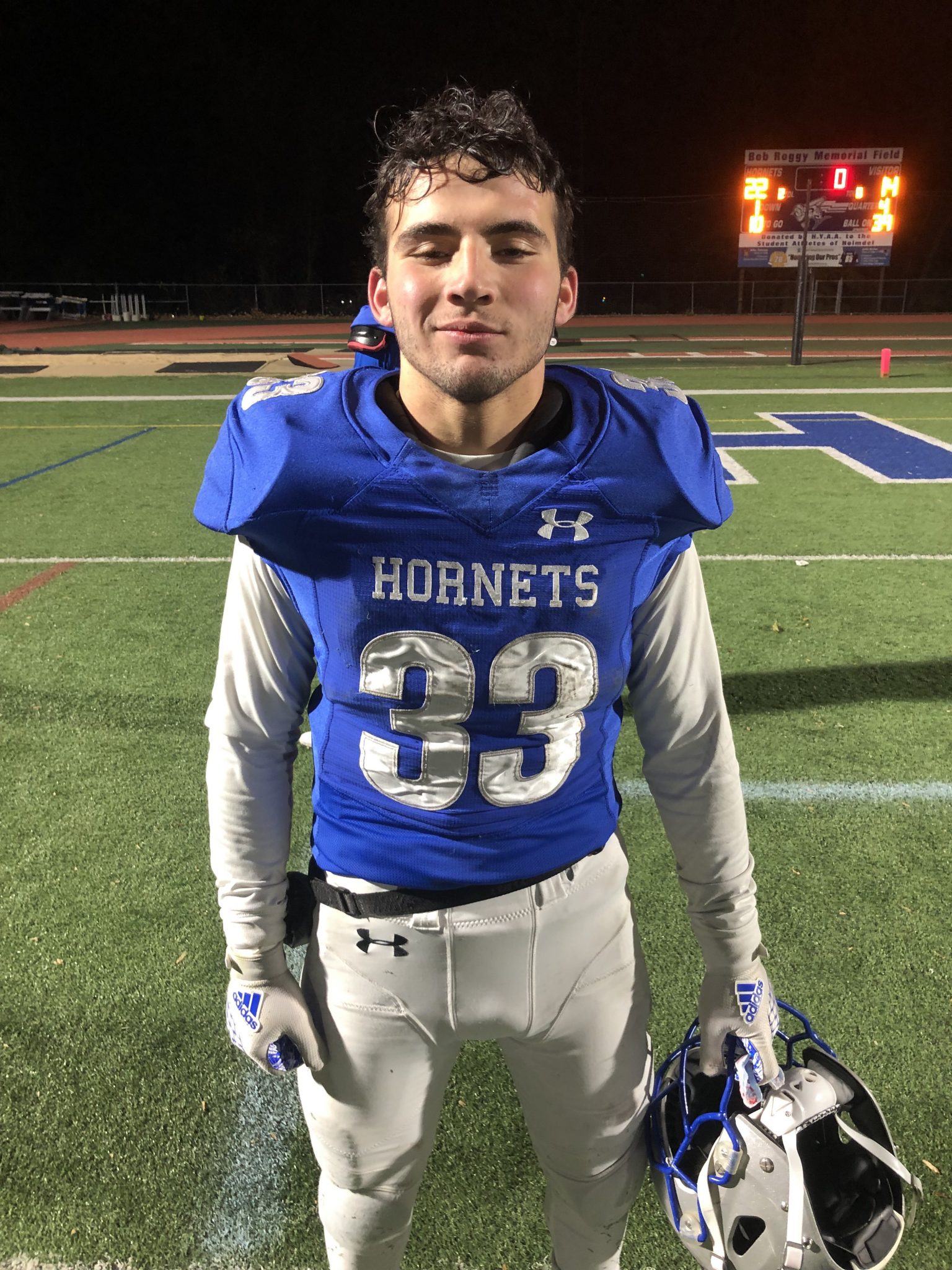 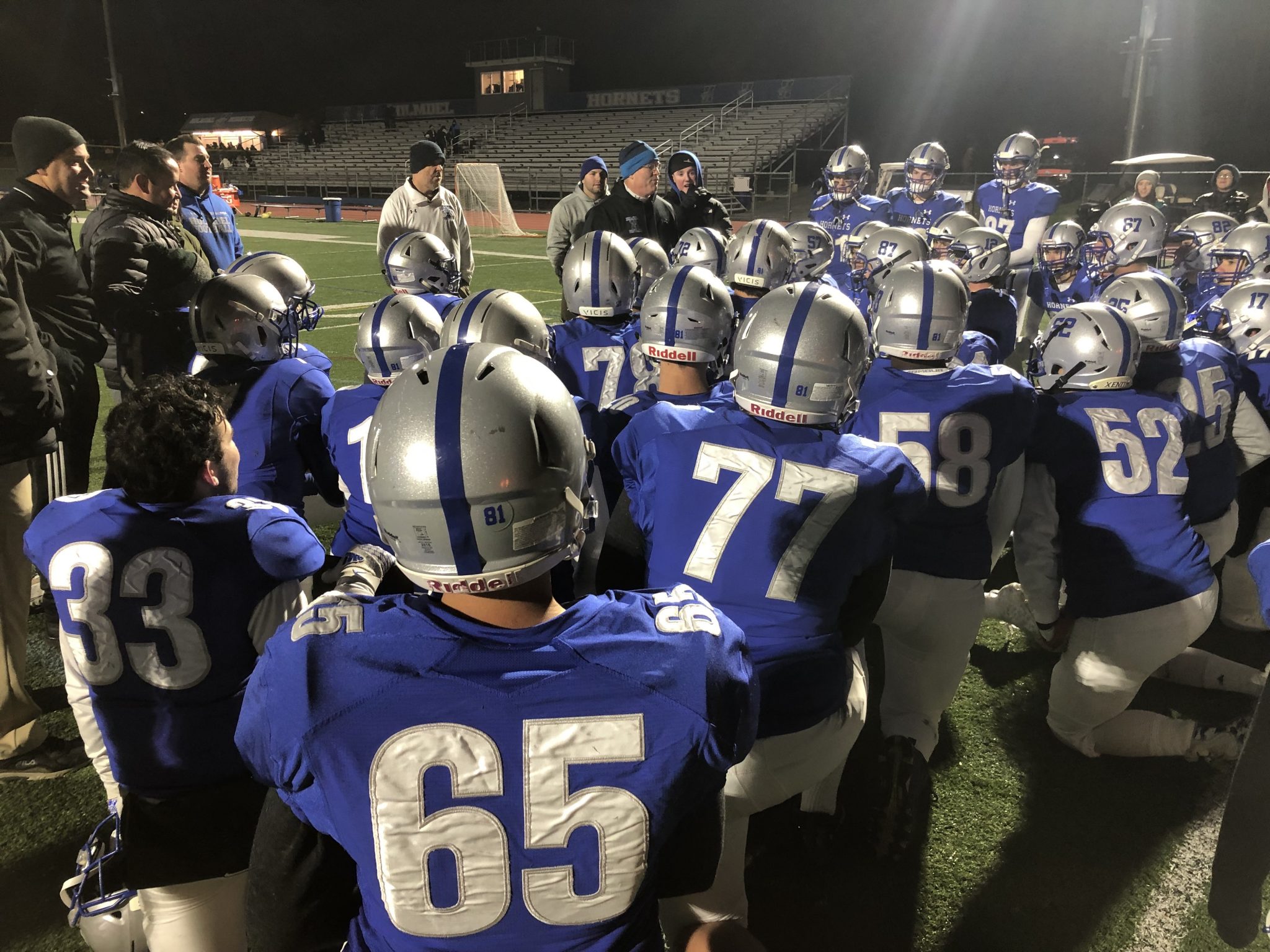 Holmdel High School will lean on the direction of Thomas Ammirti to guide its way to a state sectional playoff football championship.

Ammirati showcased his many talents on a chilly evening of Nov. 8 at Bob Roggy Memorial Field when he sparked the host team, fourth-seeded Holmdel, to a 22-14 victory over fifth-seeded Red Bank Regional High School in the opening round of the New Jersey State Interscholastic Athletic Association’s South Jersey, Group 3 sectional playoffs.

Ammirati took part in three touchdowns against Red Bank, two on the ground and one through the air, to help the Hornets move on to the sectional playoff semifinals.

“This was a great program win,” said Holmdel coach Jeff Rainess. “I had a lot of people tell me this couldn’t be done here. It’s great validation of the hard work a lot of people have put in over the last few years. We found a way to get it done and I’m so proud of the kids.”

His team trailing 7-0 midway through the second quarter, Ammirati lit a spark into the Hornets with his arm to help them grab the lead going into halftime.

Catching the Red Bank Regional defense off guard, the senior executed the flea flicker to perfection with a 28-yard touchdown up the sideline to Dylan Day to get Holmdel on the board with 1:06 to play in the first half.

A roughing the kicker penalty by Red Bank on the pursuing extra-point try led to a successful two-point conversion try by Holmdel on Evan Jennings’ one-yard plunge to the end zone that gave the Hornets an 8-7 halftime lead.

“We’ve been practicing that play all week and knew we were going to run it in the game,” Ammirati said. “It was the perfect moment to run it. It was a great momentum booster for us.”

Holmdel extended its lead on the first drive of the second half. After Jared Battaglia drove the Hornets down to the Red Bank Regional six-yard line on a gritty 30-yard run off the quarterback option, Ammirati capped off the five-play 52 yard scoring drive on the next play with his first rushing touchdown of the night to put Holmdel up 15-7.

Ammirati found the end zone once again on Holmdel’s second possession of the third quarter.

A fumbled snap by Red Bank quarterback Jack Chamberlain on fourth down and inches allowed Holmdel to take over at the Buccaneers’ 22-yard line.

The Hornets took full advantage of the great field position, extending their lead to 22-7 two plays later on a 15-yard galloping touchdown run by Ammirati.

Red Bank didn’t go away quietly however, cutting the Holmdel lead to 22-14 with 8:19 to play on Chamberlain’s second touchdown pass of the night.

The Buccaneers had a chance to force overtime with getting the ball back at its own 20-yard line with 1:43 to play.

Red Bank drove out to the Hornets’ 39-yard line with six seconds left to set up one final play to get into the end zone.

The Holmdel defense was ready for what Red Bank had in store for them on the final play with the hook and ladder play-call. The Hornets swarmed to the football and tackled Buccaneers’ Makai Mickens to end the game and seal Holmdel’s trip back to the sectional semifinals.

One of the Holmdel players on the tackle was Myles Day, who had a big night. Day racked up two interceptions and blocked Red Bank’s field goal attempt at the end of the first half to keep Holmdel in the lead going into halftime.

“Our defensive unit is fast and physical,” Rainess said. “They love playing for Coach (Principe). He has them ready for every situation in every game. I’m very proud of them.”

Holmdel improved to 6-3 on the season.