On Nov. 18 at Nottingham High School, The 12th Man TD Club honored the football players who were Mercer County Unsung Hero recipients for this fall.

The 32 student-athletes from the 15 area high school football programs were recognized for their dedication and play over this past season.

Listed below are the players that are your 2019 Unsung Hero award recipients:

The 12th Man TD Club also honored their Players of the Week from this past weekend.

Notre Dame’s Ryan McCabe won Offensive Lineman of the Week for his great play in the Irish’s 45-35 loss to St Peter’s Prep in the quarterfinals of the NJSIAA Non-Public, Group 4 playoffs.

Steinert’s Cody Young won Defensive Back of the Week after playing well in the team’s 28-22 loss to Lakewood in its NJSIAA Regional Crossover game.

The 12th Man TD Club will hold its final dinner of the season at Massimo’s in Robbinsville on Dec. 4. The club will recognize both the Player of the Year and Lineman of the Year for the non-prep and prep schools at the event. 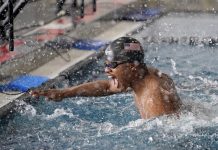