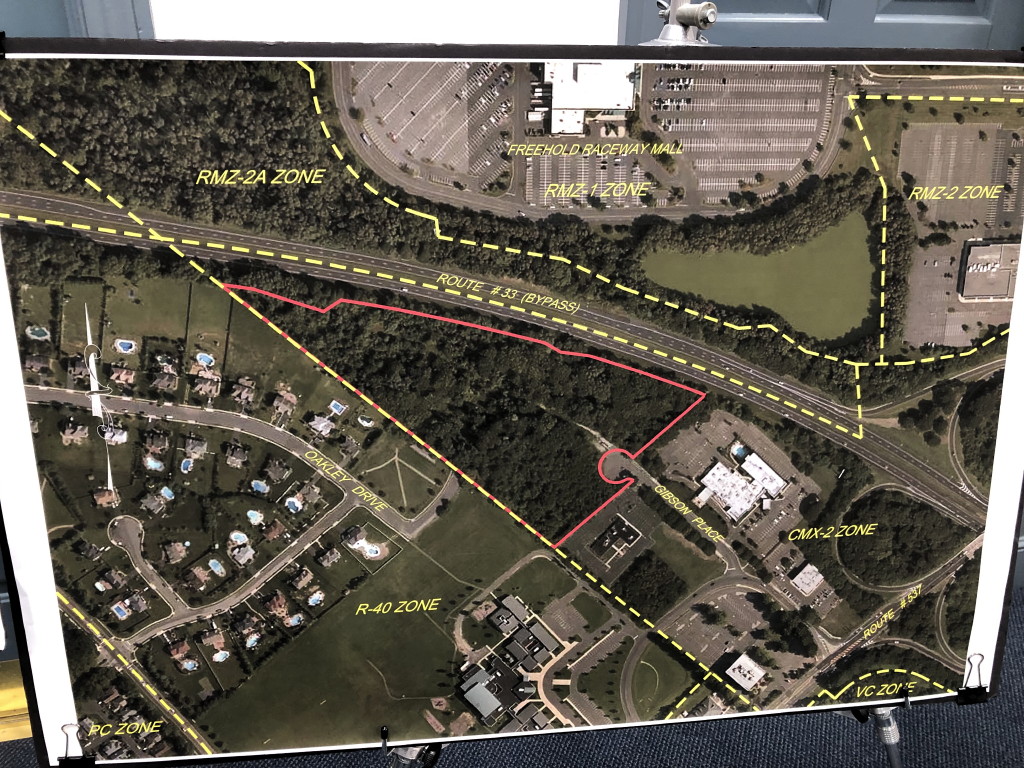 FREEHOLD TOWNSHIP – With a unanimous voice vote, the members of the Freehold Township Planning Board granted a use variance to an applicant that has plans to construct a self-storage facility on Gibson Place.

Members of the board took the action during a meeting on Nov. 14 when they consented to allow Wasatch Storage Partners, LLC, to move forward with a plan to construct the business on a 13.2-acre property.

Attorney Jennifer Krimko, of the firm Ansell Grimm and Aaron, Ocean Township, represented Wasatch Storage Partners. She said the professionals who represent the applicant will now design a complete plan for the business and return before the board, hopefully during 2020, to seek site plan approval.

The applicant would not have sought site plan approval if the board did not grant the use variance. Self-storage is not permitted in the CMX-2 zone on Gibson Place and because of that restriction, Wasatch Storage Partners sought the use variance from the board.

Initial testimony regarding the application was heard on Oct. 3. According to a concept plan that was presented that evening, Wasatch Storage Partners will seek approval to construct a self-storage facility with 11 buildings, parking spaces for recreational vehicles, and site improvements such as landscaping and lighting. There will be about 900 storage units available at the location.

The business will have a small office where paperwork would be completed and a retail area where items such as boxes, tape and locks would be sold. There will be gated access with digital access for individuals who lease a storage unit.

During testimony on Oct. 3, David Boesch, of Nelson Engineering Associates, said the property where the applicant wants to construct the self-storage facility is bordered by and/or near the Route 33 bypass, a Radisson hotel, the Chinese American Bible Church, a Kiddie Academy childcare center, the West Freehold School and homes on Oakley Drive. The property is wooded and undeveloped.

Boesch said the only access to the business would be from Gibson Place, which intersects with Route 537. All of the proposed buildings will be one story structures.

The applicant’s proposal to provide parking spaces where individuals would be able to park recreational vehicles, boats and box trucks prompted comments from board members and the panel’s professionals and led to a dialogue with the applicant’s representatives.

On Nov. 14, Boesch returned to describe the changes in the concept plan that were made after board members and residents provided feedback at the previous meeting.

He said a larger scenic corridor has been added to the property, specifically where the tract borders the West Freehold School, the Route 33 bypass and the residential neighborhood on Oakley Drive; the entire project has been shifted 10 feet to the northeast, farther away from the closest homes; a significant buffer will ensure there will be no vehicular access to the self-storage facility from Oakley Drive.

Krimko listed the vehicles that could be parked at the business in the outdoor storage area. Those vehicles are automobiles, trucks,  boats, motorcycles, snowmobiles, wave runners/jet skis or recreational vehicles (campers/RV). She said the minimum lease for an outdoor storage space would be one month.

She said all stored vehicles must be operational and properly registered with all license plates, stickers or tags visible; vehicles may not be inhabited while onsite; no utility connections will be available; the parking area is for storage only and not for daily parking use; and no commercial fleet vehicles are permitted.

Krimko said the owner of a company, for example a landscaping company, would be permitted to park a commercial vehicle at the site on a long-term lease (i.e., if the owner went away for the winter and needed a place to park a truck).

During the Oct. 3 meeting, one resident raised the possibility of hazardous materials being stored in an individual’s leased unit.

On Nov. 14, Krimko told the board that the company’s lease with each unit renter gives the business owner the right to enter a unit without notice to the lessee in case of emergency (i.e., if it is alleged that hazardous materials are being stored in a unit).

The next professional to testify on behalf of the applicant on Nov. 14 was Doug Polyniak, senior project engineer, Dolan and Dean Consulting Engineers, Somerville. He told the board a self-storage facility is one of the lowest traffic generating uses available.

Licensed planner John McDonough discussed the reasons why, in his opinion, the granting of a use variance was justified. He said the site on Gibson Place is particularly suited for a self-storage business, which McDonough said is a use that “has moved from the back of a town to the front of a town.”

In response to questions posed by Krimko, McDonough said there would be no substantial detriment to Freehold Township’s land use plan if the board granted the use variance.

Self-storage “is a low intensity land use, much less intense than what is permitted in the zone,” he said.

No member of the public commented on the application when given the opportunity to do so.

A motion was made to grant Wasatch Storage Partners the use variance and the board’s chairman, Rich Gatto, called for a voice vote. All of the board members present verbally indicated their approval for the use variance.

The applicant will return at a later date to seek site plan approval for the self-storage facility.