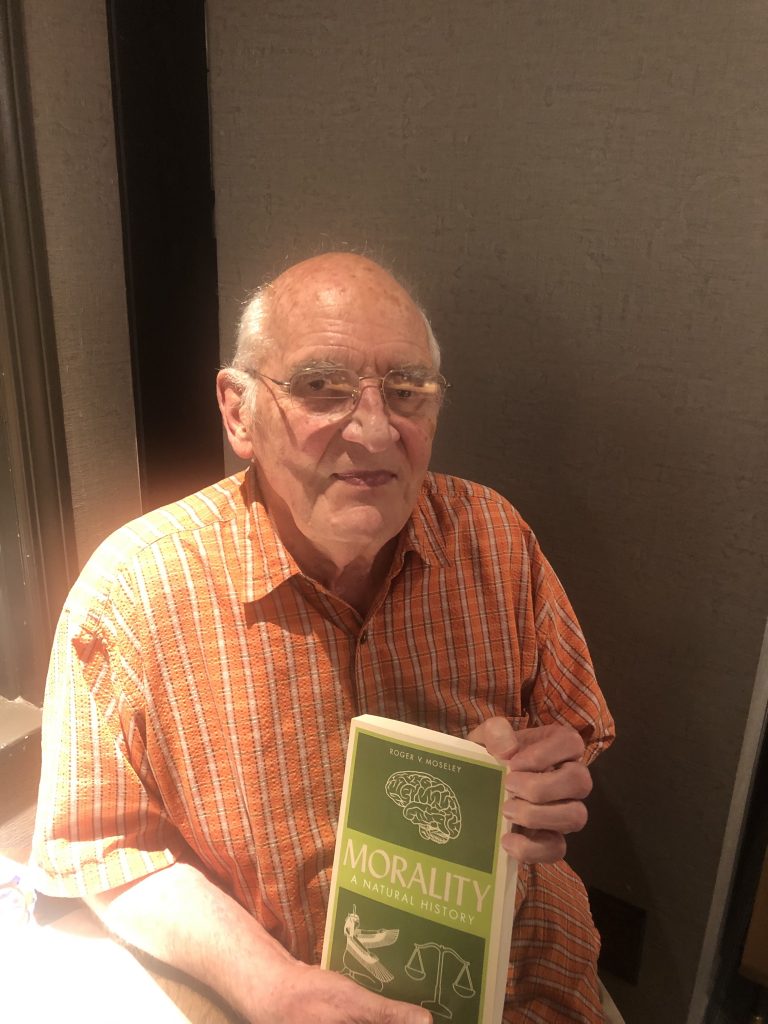 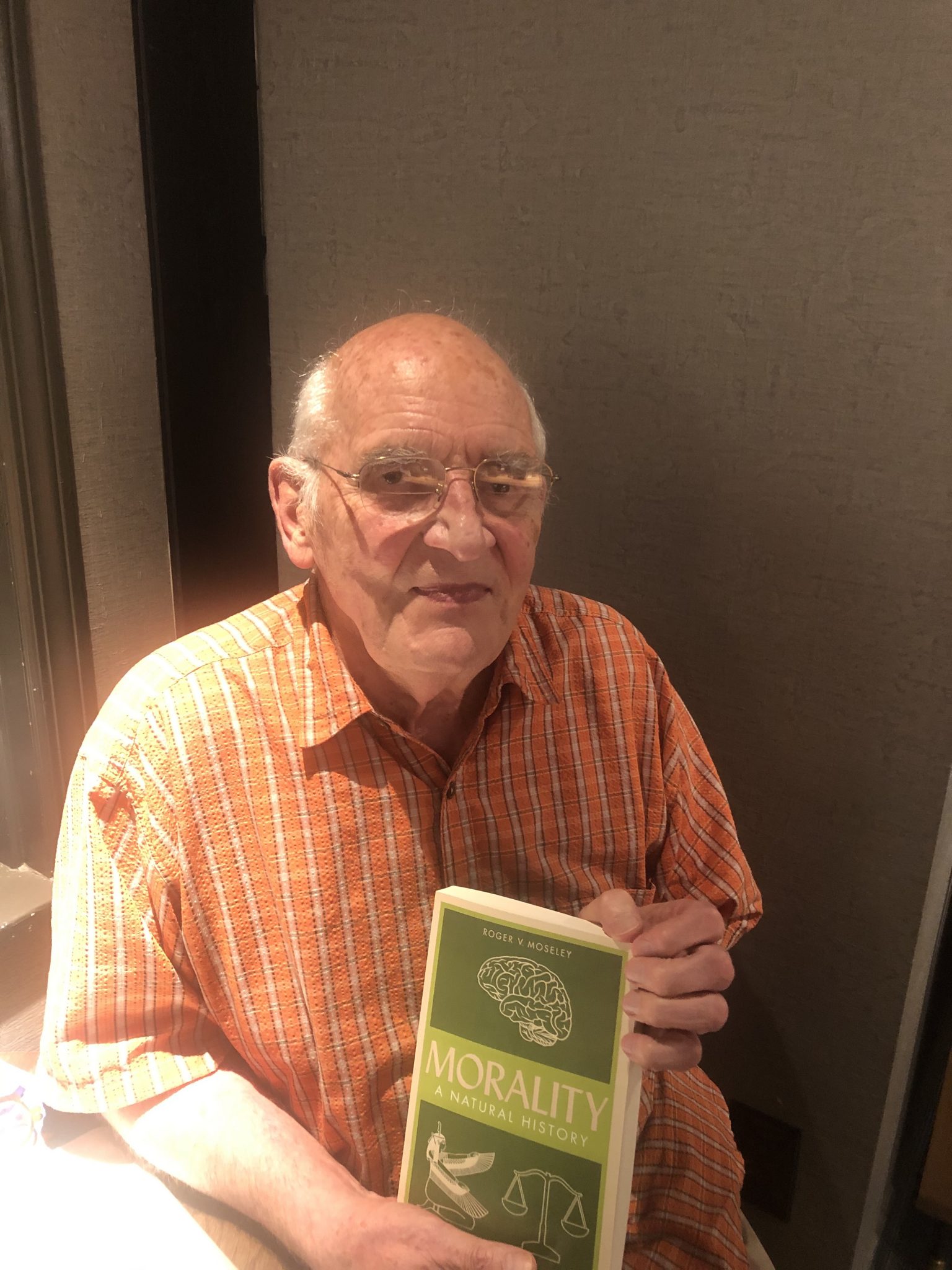 After an unlucky few years at the beginning of his life, retired Princeton surgeon Dr. Roger Moseley has had the good fortune of finding himself in the right place at the right time.

And at the age of 85, he still has a knack for good timing. He just published his book “Morality: a Natural History” – at a fortuitous time, since the topic of morality is front and center these days thanks to our current political climate. Princeton University Professor Stan Katz described the book as “a fascinating and profound reflection on the natural history of the idea of morality.”

The author, however, said the good timing was just serendipitous, because the idea of examining morality in human behavior has always fascinated him, long before any of the political “gate” scandals of the past several decades.  Before he spent three decades as a general surgeon in Princeton, before he became a husband and father of four, before he served as part of a surgical research team in Vietnam.

“I became interested (academically and personally) in why people act the way they do – how they come to make the moral decisions. I have been thinking about this my whole life.…Humans have these frontal lobes which are unique, no other animal has frontal lobes, that is where we make executive decisions about moral actions…,” he said.

His thoughts about human behavior crept into his psyche, when he only a seven-year -old youngster living as a suburban middle class kid in England.

“I was five years old when I last saw my father. By the time I was seven, my father, a British Amy tank driver in World War II, was dead. I assumed it was my fault, because I undoubtedly had failed to recite a prayer that he – when he left for combat – told me to recite daily.”  After his father’s death, his godmother tried to comfort him by submerging him in a new experience – the doctrines and rituals of a Roman Catholic Church.  His thoughts about heaven, hell, purgatory and the decisions influencing the behavior that got a person into these places were the seeds that grew into a book several decades later.

His father’s death, however, also triggered the good timing phase of his life.

“Misfortune gave rise to new opportunities. Because of my father’s death in war, I was considered a ‘partial orphan’ and thus eligible to enter an all boys, charity boarding school….There I received a first-rate scholarly education, and in day-to-day living, I learned to sharpen my views about fairness and morality.”

That school, founded by Edward VI in 1552, also was where he experienced what turned out to be a life-transforming event.

“Just by chance, Princeton University President Harold Dodds was doing the research for a book he was writing about English schools. He came to my school, and I was lucky enough to meet him. In our conversation, he told me to come to Princeton University and gave me his card as a way of introduction. I never had heard of Princeton University, but I knew that my prospects at Cambridge were uncertain.  With my mother already in America (in Illinois with an American GI who would become her second husband), I got on a boat that two weeks later docked in New York.  Wearing the same clothes I had been wearing for two weeks, I took the bus to Princeton, walked into the Princeton University admissions office then in Nassau Hall, and handed the admissions officer President Dodds’ card. I was admitted and told them I had no money.  They said ‘not a problem—you will work part-time.’ Six weeks later, I started classes and became a member of the class of 1955; I started as a sophomore, since I already had taken many of the freshman class requirements at the boarding school in England.”

President Dodds’ instincts about the English youth Roger Moseley proved 100 percent correct. He graduated with highest honors in chemistry from Princeton University and went on to Harvard Medical School. He became a surgeon renowned not only for his exceptional skills in the operating room, but also for his ongoing interest in research on the lungs, transplants and immune suppressant drugs.

The other bit of “very fortuitous timing” was meeting Caroline Rosenblum, while he was an undergraduate at Princeton.  She was a senior at Princeton’s Miss Fines School for girls (now the coeducational Princeton Day School) and had the lead role in a production of Gilbert and Sullivan’s opera “Patience.”

“I had heard that the production needed some male voices, so I tried out –curious about performing on stage, but also very intrigued with the prospect of meeting some girls, since I had only attended all-boys schools,” he said.

Thanks to “Patience,” Roger connected with Caroline, the love of his life and life’s mate, who died in 2016 after a 60-year marriage and a 63-year friendship. Writer, editor, storyteller and folk musician Caroline went to Radcliffe College (Harvard), an act that was the impetus for Roger to go to Harvard Medical School. They returned to Princeton, when Roger was called upon to go to Vietnam. Even though Caroline was the writer in the family, Roger wrote his book himself, but it was Caroline who inspired him to put words to paper.

After he retired from his job as a surgeon, he spent five years reading numerous books and auditing classes on philosophy at Princeton University. His wife said he should write down his thoughts in order to make sense of all the ideas swirling around in his mind. He wrote the entire book by longhand, since he never learned how to type. Caroline did agree, however,  to type the manuscript.

“At least it was written in English and not Japanese,” said Roger, referencing his other retirement activity – obtaining an expertise in the Japanese language. He formally enrolled in Princeton University’s Continuing Education Program and was able to study Japanese as though he were an undergraduate – completing all the coursework, taking all the exams and even spending a summer abroad in Japan.

“I always wanted to learn about a culture that was very different from Western culture,” said Roger noting that he still gets tutored once a week in the Japanese language.

When he tires of all the sitting involved in reading and writing, Roger puts on his hiking shoes and climbs mountains. An experienced mountain climber, he has tackled peaks all over the world. But he enjoys coming back to ground level to spend time with his four children, 10 grandchildren, and his Princeton friends and hospital colleagues. In addition to having good timing, Dr. Roger Moseley still is having a good time at this time in his life.

Roger Moseley is speaking about his new book “Morality: a Natural History” on Tuesday, Dec. 3, at 7 p.m. at the Princeton Public Library