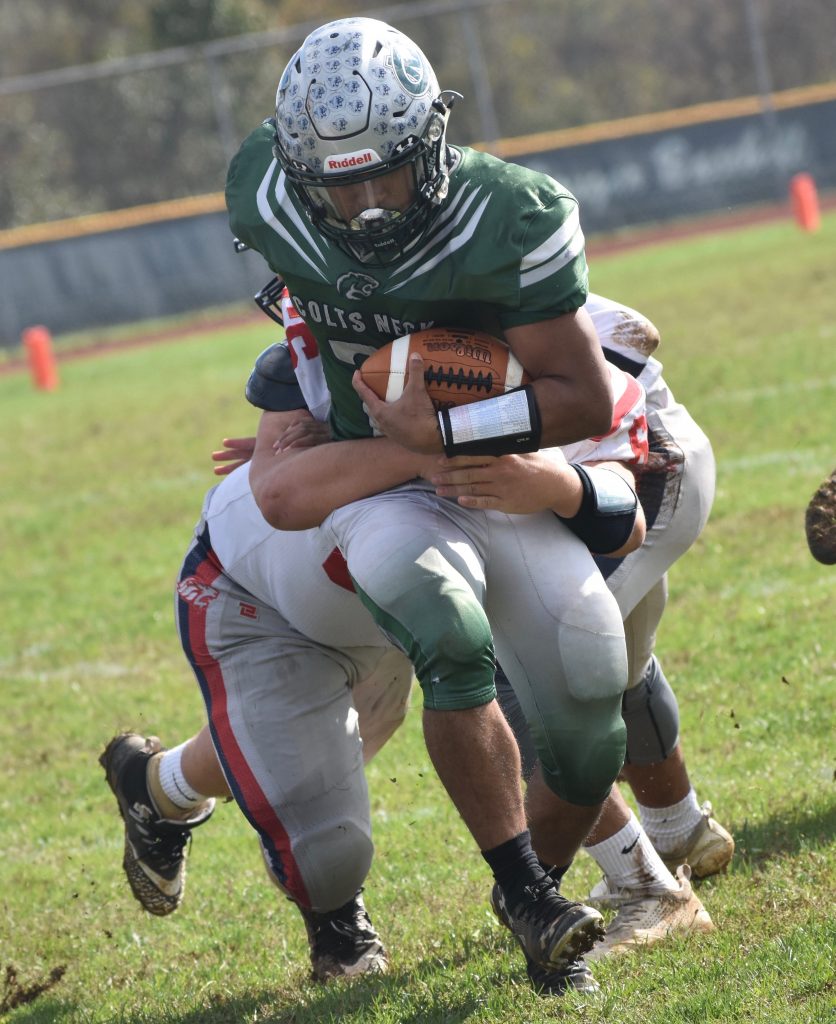 Colts Neck High School running back Romeo Thomas runs through a tackle during a game against Jackson Liberty this season. Colts Neck finished the season with a record of 8-2.STEVEN BASSIN/STAFF
× 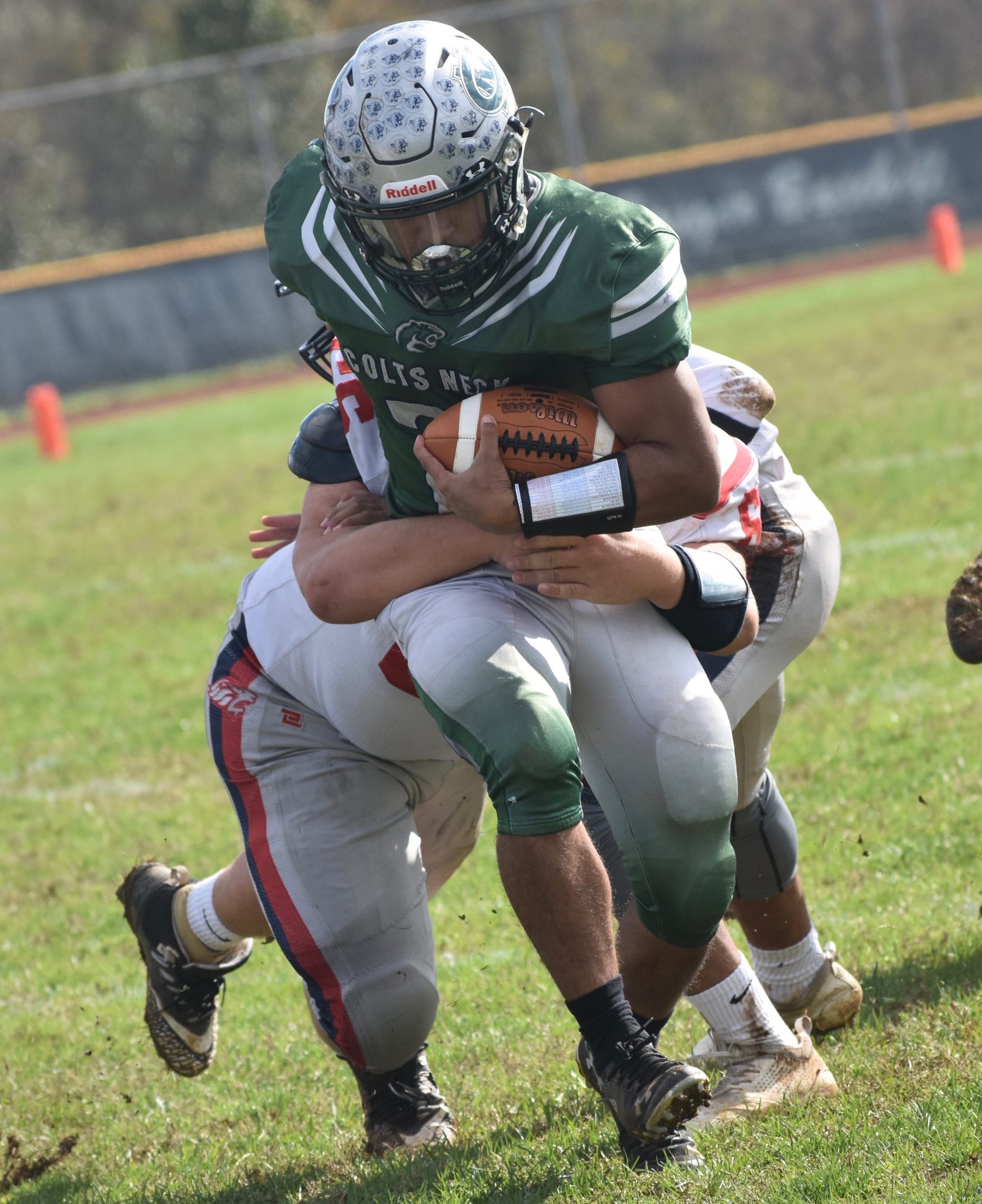 Colts Neck High School running back Romeo Thomas runs through a tackle during a game against Jackson Liberty this season. Colts Neck finished the season with a record of 8-2.STEVEN BASSIN/STAFF

It was a great program building season for the Colts Neck High School football team in the fall of 2019.

The Cougars finished with a winning record for the first time since the 2013 season, when Colts Neck reached the final of the NJSIAA Central Jersey, Group 4 sectional playoffs.

“It was an enjoyable season,” said Colts Neck coach Matt Ahearn. “It was nice to see our team get a lot of support from the school and the Colts Neck community. To go from 3-7 to 8-2 and doing it the right way was big for our program. Our team showed its character and how resilient it was throughout the season.”

Colts Neck started the year off with a bang. The team roared to a 3-0 mark, despite playing their first three games on the road.

In its next game, Colts Neck suffered its first loss of the season against Toms River High School East. The Cougars bounced back with a vengeance in their next three games, going on their second three-game winning streak to set themselves up at 6-1 going into the last two games of the regular season.

Colts Neck failed to extend its winning streak to four games against Neptune, seeing the Scarlet Fliers comeback in the second half to steal a 21-17 victory.

In its regular-season finale against Jackson Liberty High School, Colts Neck rallied in the fourth quarter for its seventh victory of the season behind a 233-yard and two-touchdown performance by running back Romeo Thomas.

Thomas had a fantastic senior year for the Cougars. The senior finished with a career-high 1,282 yards rushing and 19 touchdowns. A 34-yard touchdown catch in the victory against Pinelands Regional High School gave Thomas 20 total touchdowns for the season.

“It’s going to be tough to replace a two-time All-Division running back,” Ahearn said. “Romeo was a great player and leader for our team. We had great leadership from our senior class this season.”

The loss to Neptune proved to be very costly for Colts Neck, which was unable to earn a state playoff berth despite going 7-2 in the regular season.

Disappointed in not making the playoffs, Ahearn and the Cougars knew ending the season in its NJSIAA Crossover Regional game Central Regional High School with a victory would be an important factor in the growth of the program and send the seniors out on a high note.

Colts Neck did just that by hanging on to defeat Central Regional, 28-21, and finishing the season with an 8-2 record.

“This was our bowl game,” Ahearn said. “It was an opportunity for us to right the wrongs that came our way this season. This was a way for us to start next season off with a victory and send the seniors out on the right note.”

Despite the losses of Thomas, Ibrahim Diallo, and linemen Tom Lidonici and Jackson Sparacio, Colts Neck will have a lot of talent returning next fall.

Quarterback Tommy Fallon turned in a nice campaign for the Cougars. Fallon threw for 739 yards and nine touchdowns. The sophomore was also a force in Colts Neck’s run game, racking up 469 yards on the ground with four touchdowns.

Fallon’s top target,Matt Scully, is expected back after a nice junior season.

Scully had 21 receptions for 307 yards and three touchdowns. The junior also led Colts Neck in tackles this season with 97 from his defensive back position.

Defensive end Delano Marcelus was a force off the edge during his junior season for the Cougars, recording a team high in sacks with six and tackles for loss with 10 to go along with 91 total stops for the fall.

Junior Joe Barsky and sophomores John Manos and Anthony Bonanno all turned in solid seasons on defense for the Cougars.

“We’ve got some guys coming back next year,” Ahearn said. “Every team is different each year. We have to work hard from now to next season to get everyone gelling together. We have a long way to go to get back to the success we had this season.”