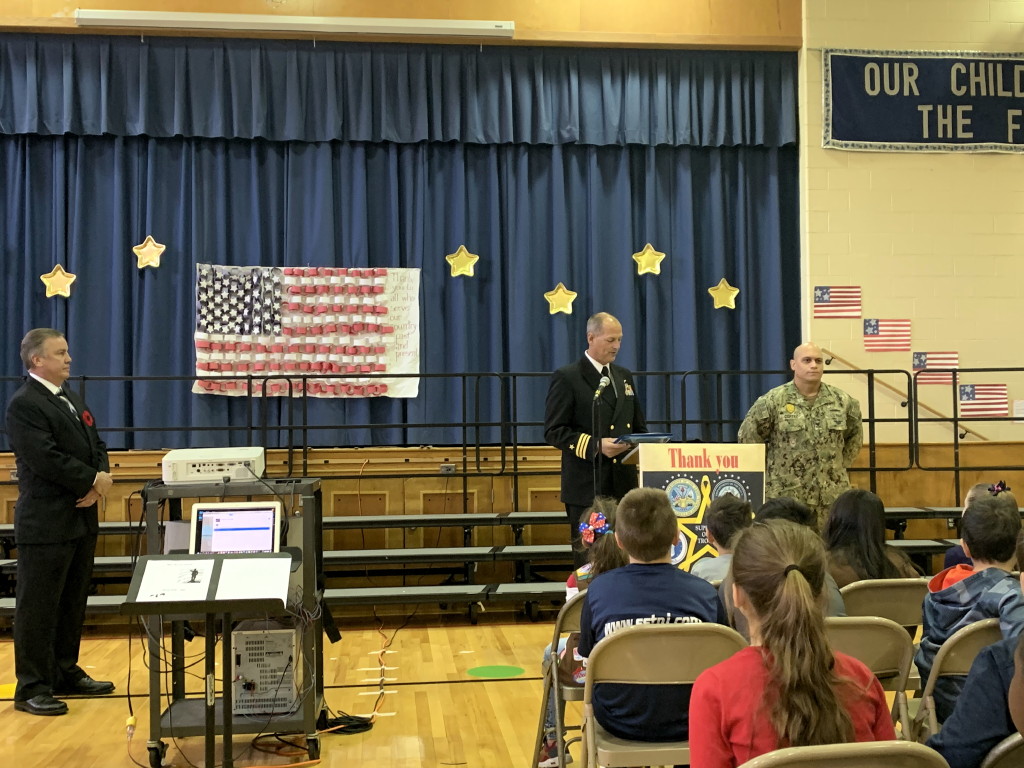 HOWELL – During an assembly at the Newbury School that was held to honor Howell’s veterans, Petty Officer MA1 Ernesto Cortez received the Navy and Marine Corps Achievement Medal.

Since the beginning of the 2019-20 school year, pupils who attend the school on Newbury Road have been able to make use of a bridge that was built over a drainage area that connects a soccer field to a playground.

In September, students and staff members held a dedication ceremony for the bridge that has been named the Liberty Memorial Bridge.

The bridge was constructed by military service members who are stationed at nearby Joint Base McGuire-Dix-Lakehurst. Cortez led the effort to get the bridge constructed.

During the Newbury School assembly on Nov. 15, veterans, parents, family members, friends and neighbors of the pupils were honored by the third-, fourth and fifth-graders. The children sang songs and read letters which stated how thankful they are to have the servicemen and servicewomen in their community.

Veterans from the Korean War, the Vietnam War, the Iraq wars and service in Afghanistan were present at the assembly.

Cortez said receiving the medal was the best way to say goodbye before his upcoming deployment to Manama, the capital of Bahrain.

“What a tremendous honor, definitely the best way to say goodbye. I have some of my shipmates here, some of my friends, some of my wingmen from the 87th Security Forces, and some Marines who came out to say goodbye and thank you for my service here with Newbury School.

“I am going to miss it. I will be honest with you, I am fighting back the tears right now because this is definitely what it is all about, giving back to the community, doing something nice for the community and kind of bridging the gap between the military and the community,” Cortez said.

Cortez said he expects to serve with an expeditionary unit in Manama for 18 to 30 months.

Speer presented Cortez with an “End of Tour” award. He said although members of the military may not be thanked on a daily basis for what they do, their accomplishments are recognized at the end of their time at a post.

“For the time (Cortez) spent here (in Howell) and at Lakehurst, (the award) encapsulates everything he has done, all of his accomplishments for the two years he was here,” Speer said. “Today was a great event. I had no idea there were this many veterans (in the Newbury School community) and (the students) really put on a good show.”