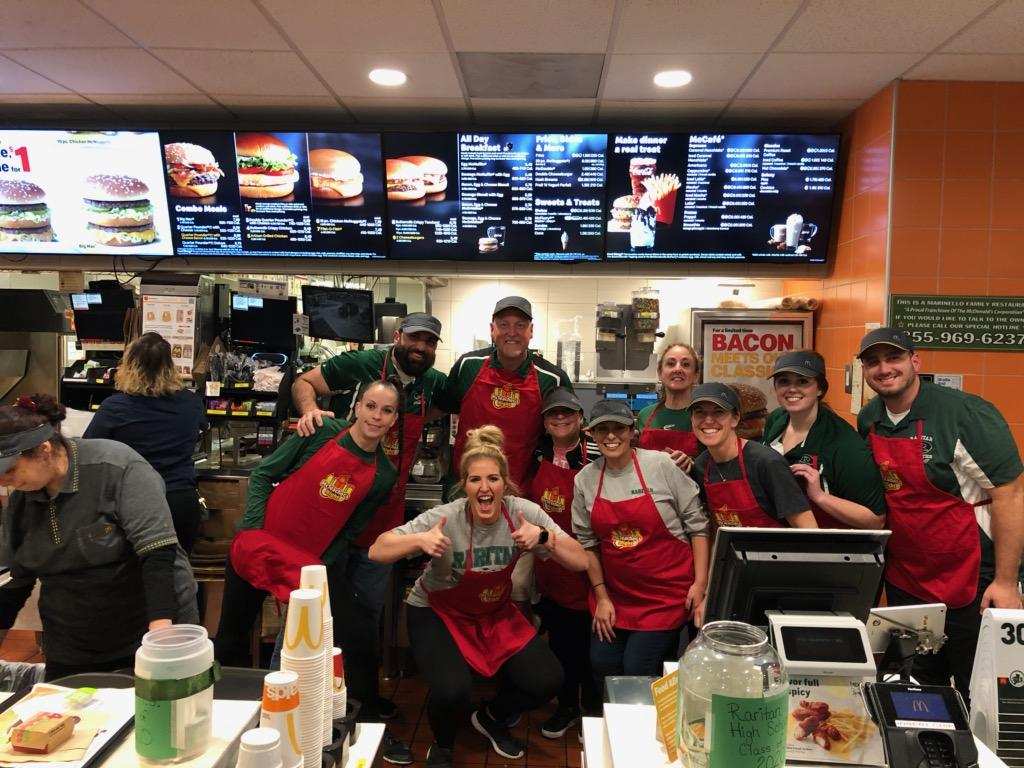 Educators at Raritan High School in Hazlet swapped their lesson plans for red and yellow uniforms during the school’s annual “McTeacher Night.”

And students are “lovin’ it.”

On Nov. 20, the local educators worked at a McDonald’s retaurant in Hazlet to raise money for students in the 2020 graduating class.

Dana Valenti, a teacher and senior class adviser at Raritan High School, said proceeds raised during the event will go toward lowering the cost of prom tickets for students.

Proceeds raised will also help cover the entire cost of prom tickets for select students in financial need, she said.

Valenti said this year’s McTeacher’s Night, a popular fundraising initiative held across the country, was the third year the school took part in the fun event.

“(In 2016), I was talking to a friend of mine about fundraising ideas and she mentioned that she heard of something called McTeacher’s night. I did some research and came upon the event. I contacted the Hazlet McDonald’s, and spoke to their restaurant’s general manager Gladys, in which she put me into contact with the owner, Alana Marinello.

“Right from the start, Alana was over the top helpful and super excited for us to host an event at her store. (Educators) are looking forward to holding another (McTeacher’s Night) in the spring,” Valenti said.

Volunteers trained for only 30 minutes prior to the start of their three-hour shift, Valenti said.

Valenti explained that tips from customers, as well as 10% of the sales from the event, will go toward funding the partial cost of prom tickets.

“Myself and my co-advisor, Dana Cisneros, come up with a list of teachers, including ourselves, that we would like to ask to participate in the event,” Valenti said. “To date, everyone we ask is always more than willing to come out and help.

“The teacher’s look forward to this fundraiser each time we hold it … Our teachers love to support our school and community, are always happy to do so and this is just another way in which they showcase that,” Valenti said.

Valenti said the students are grateful to see their teachers hard at work.

“When the students see us, their initial reaction is to laugh and smile. (Students) are surprised when they see us wearing the McTeacher aprons, visors and seeing that we are actually working,” Valenti said.

“We are beyond grateful for the owner, Alana of the Hazlet McDonald’s for her generosity in helping us to raise funds and for Gladys, restaurants general manager, for making us feel like when one of their team members,” Valenti said.

Valenti said students support their educators by visiting the McDonald’s during the event.

String ensemble will perform in Freehold on Jan. 26