Middletown eatery coming in 2020 has “no limits” 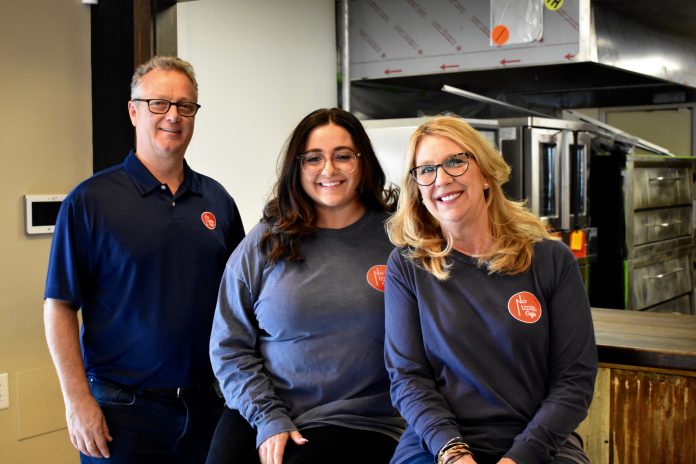 An eatery where potential is unbounded will soon open its doors in Middletown.

No Limits Cafe,a 501(c)(3) charitable organization, will train and employ adults with intellectual disabilities. The eatery is anticipated to open in January of 2020.

“We want to show everyone what (these individuals) are capable of, which is a lot,” co-founder Stephanie Cartier said in an interview on Nov. 29.

The Cartiers, who have a 21-year-old daughter with down syndrome, said employment opportunities for individuals with special needs are infrequent.

“When our daughter, Katie, was 19, we tried to figure out what she would do when she graduates from high school,” Stephanie Cartier said, explaining that individuals with special needs remain in high school until age 21.

“That is how (individuals with special needs) are supported. After 21, they are supported by the state and federal government. After 21, the support is much different. People refer to (the sudden elimination of education) as ‘falling off a cliff.’

“We were trying to think of something to do for Katie so she wouldn’t fall off that cliff. We thought of so many ideas that would just help Katie but we knew so many people her age were in the same boat,” Stephanie Cartier explained.

Although the pair never worked in food service, Stephanie and Mark Cartier toyed with the idea of opening a restaurant and employing individuals with intellectual disabilities. During that time, an NBC news special about a similar business venture in Texas caught their attention.

Without hesitation, husband and wife traveled to Texas to meet with the owners of Hugs Cafe, a restaurant that hires adults with special needs. The pair was invited to work in the restaurant and were given advice about opening and operating a business of that nature.

“We’ve also been to (similar businesses) around Virginia and New York to see what other establishments were like,” Stephanie Cartier said. “We figured out what we wanted to do and what we didn’t want to do. We wanted to provide real jobs and meaningful employment.”

No Limits Cafe will serve soups, salads, sandwiches, desserts and other options for health-conscious individuals. Employees will reference photographs of menu items and written recipes when preparing food.

“We are trying to train people in every capacity to show people what (intellectuals with disabilities) can do,” Stephanie Cartier said.

Prior to the business’s grand opening, new employees will attend an orientation.

“The first night (of orientation), employees will come in and the management staff will serve the employees food. Everyone will be able to get acquainted with each other and understand what they are then going to do (at work),” Sciortino said.

She also explained that hands-on training will follow the orientation.

“We will start with very slow soft openings. (Management) will invite in a couple of tables at a time, some friends and family. Then, all of the employees will feel comfortable and understand their responsibilities so that when (the employees) feel successful, we will open to the public. It may be a long training process but that is OK,” Sciortino said.

After the business opens, Stephanie Cartier said, evening workshops will be held to train additional adults with Intellectual Disabilities to work in the restaurant industry.

Stephanie Cartier reported that a community liaison will visit local restaurants to see which eateries may be interested in hiring these individuals trained to work in food service.

At present, 80% of individuals with intellectual disabilities are unemployed, Stephanie explained.

“We are trying to change that (statistic), at least locally,” Stephanie Cartier said. “When you come and see what (these individuals) can do, it’s amazing. They just may need a little more time or help. Statistically, people with disabilities are the most loyal employees and greatest workers. But we have to show people that.”

The dining area and kitchen have been modified to accommodate individuals with diverse needs, Stephanie said. A low counter, which is accompanied by a high counter, will allow vertically challenged or wheelchair bound individuals to pass food from the kitchen to the server.

Other modifications include a food preparation station catered to accommodate individuals in wheelchairs, wide kitchen aisles, and wheelchair accessibility throughout the restaurant.

Employees at No Limits Cafe will be paid minimum wage.

Although the kitchen and dining area are unfinished, the Cartiers have already had positive mantras painted on the restaurant walls to encourage patrons and employees to live well, be kind, and empower others.

Stephanie Cartier said the community has been an incredible advocate for their new business.