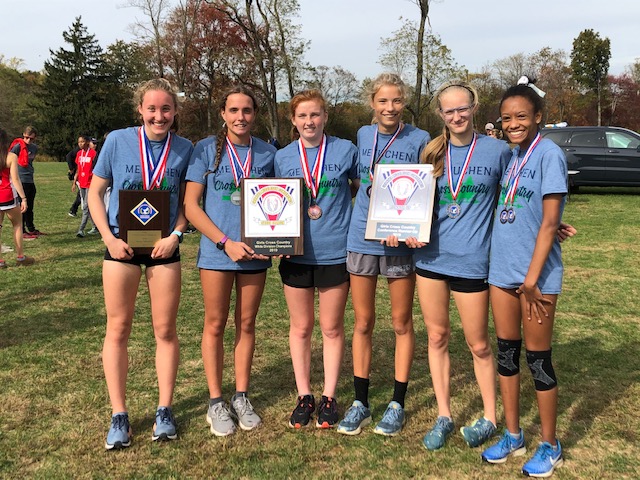 Success continued to flow through the Metuchen High School girls’ cross-country team during the 2019 season.

As a team, the Bulldogs brought home two silver medals for the Greater Middlesex Conference and NJSIAA Central Jersey, Group 2 races, while placing fourth at the Group 2 championships.

“We were very pleased with how our season progressed from start to finish,” said Metuchen coach Kelli Holleran. “The girls put in a lot of work during the offseason to make this season a success.”

Sophomore Caroline Schleif put together a strong season on the trails for Metuchen.

Schleif took home the gold for Metuchen at the GMC race on Oct. 26 at Thompson Park in Jamesburg, racing across the finish line with a time of 19:13 for her first individual conference championship.

The sophomore ran a personal best time of 19.02 at Thompson Park during the XC Fall Classic on Oct. 12 to win the Group 2 race.

At the state sectional championships ran on Nov. 9 at Thompson Park, Schleif battled a tough field to come away with Metuchen’s best individual ranking of the meet in seventh place with a time 19:23. The sophomore placed 17th at the Group 2 championships held at Holmdel Park on Nov. 16.

“Caroline winning the GMC title was a nice accomplishment for her and the team.” Holleran said. “She improved a lot from last season.”

Malague came in fifth place at the GMC meet, giving the Bulldogs two runners in the final top five. Metuchen had four runners place among the top 20 runners to help the Bulldogs grab a second-place finish in the overall team standings.

Junior Bridget Thomas posted a time of 20:13 for 13th place, while sophomore Sara Lignell finished 17th in the race.

South Brunswick won the GMC meet for the fifth straight year in a row with six runners placing among the top 20.

Malague joined Schleif in the top 10 at sectionals, coming in 10 seconds after her teammate for ninth place in the race.

Strong finishes by both Lignell and Thomas, coming in 19th and 21st respectively, and freshman Zoey Brown placing 24th gave Metuchen four runners in the top 25 to propel them to taking home the silver medal at sectionals.

“We have a great group of girls,” Holleran said. “They battled all season and were willing to work as hard as they could to improve. They all had the same mission to work hard and help us be the best team we could be.”

Holmdel won the Central Jersey, Group 2 title for the first time in eight years with four runners placing in the top 15 and six total in the top 30 of the race.

Metuchen earned fourth place at the Group 2 championships after winning the event last year. Malague placed 26th, while Lignell and Thomas rolled in back-to-back to take the 34th and 35th positions in the race for the Bulldogs.

At the NJSIAA Meet of Champions on Nov. 23 at Holmdel Park, Malague posted the best finish in the meet for Metuchen by coming in 65th place.

With all its top seven runners returning next season, Metuchen is geared up for an even better fall season in 2020.

“The expectations are to work together as a team and have the same mindset as we did this year,” Holleran said. “We want to be the best team we can be and be running our best come the end of the season.” 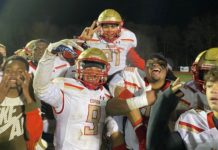 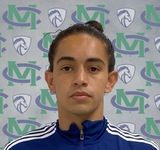