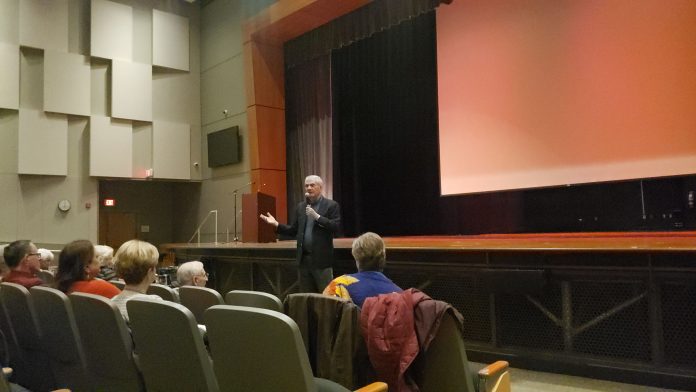 MONROE – When Peter H. Grumbacher was growing up in the 1950s in the Washington Heights neighborhood of New York City, the atrocities of the Holocaust was the cloud, the “elephant in the room” so to speak.

It was a topic Grumbacher, as a curious young child, got dismissed time and time again through a wave of the hand with a one stern syllable sound from his father Ernst Grumbacher and a one time searing look from his mother, Else.

Today the younger Grumbacher, who is a rabbi at Beth El Congregation in Winchester, Va., travels across the country speaking about the Holocaust, which was the systematic, bureaucratic, state-sponsored persecution and murder of six million Jews by the Nazi regime and its collaborators, according to the U.S. Holocaust Memorial Museum.

“With the young kids, you say six million and they may not understand, but you tell one story, that they can get the importance,” he said.

Grumbacher traveled to New Jersey and presented “Sharing the Silence: The Child of a Survivor Tells his Father’s Story” during a presentation at Monroe Township High School on Nov. 10 through the Henry Ricklis Holocaust Memorial Committee in cooperation with the Friends of the Monroe Township Library.

Presenting his father’s story for 16 years, Grumbacher said more recently people saying they don’t believe the Holocaust ever happened has become an issue. He said it’s important to say “the Holocaust happened.”

“You know and I know it did, people who say it never happened, knows it happened, they are just saying it for anti-semitic reasons,” he said, adding they are living in a tough time. “The only thing I can do is to present this story to as many audiences as possible.”

Grumbacher said as he continues to piece together his parent’s experience during the Holocaust, he understands why his parents’ generation didn’t speak.

“These people had terrible experiences,” he said. “They came to the land of the free and while raising a family, they did not want their children to hear the terrible things that happened to them.”

Grumbacher learned his father was arrested by the Gestapo and thrown into the Dachau Concentration Camp on Nov. 9, 1938 during Kristallnacht, also known as the Night of Shattered Glass.

On Nov. 9–10, 1938, Nazi leaders unleashed a series of pogroms against the Jewish population in Germany and recently incorporated territories shattering glass that littered the streets after the vandalism and destruction of Jewish-owned businesses, synagogues, and homes, according to the U.S. Holocaust Memorial Museum.

Through a “gazillion” of miracles, which Grumbacher says gives him goosebumps to this day, his father and mother boarded a ship for the U.S. on Jan. 1, 1939.

Before Kristallnacht, Ernst and Else Grumbacher filed the necessary papers to emigrate to the U.S. The papers arrived in the mail when Ernst was already in Dachau.

“My mother traveled to Dachau and amongst the gazillion of miracles, found my father in the parade grounds and handed them – through an electric fence – to my father,” he said.

The younger Grumbacher said his father – the gutsiest person – walked into the office of the comandante and put the papers on his desk saying “I have all the papers to leave.”

“I mean the guy could have killed [my father] on the spot,” he said. “The guy, thank God, looks through all the papers and said ‘Everything is in order, leave’.”

Grumbacher said his father attempted to file the necessary papers to bring his mother and sisters to America as well as he enlisted in the Army once he becamse a U.S. citizen. He said his father even reached out to physicist Albert Einstein, who happened to be a relative through marriage.

He said through pieces, he learned his grandmother and grandfather on his mother’s side were able to board the last ship to Spain; however, he learned his father’s mother died in the Auschwitz concentration camp.

Before Grumbacher presented his father’s story, the Henry Ricklis Holocaust Memorial Committee presented a moving documentary film of survivors recalling their experiences during the Holocaust.