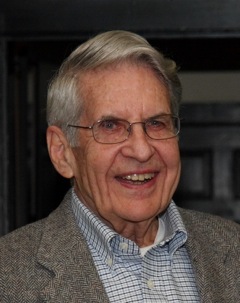 James Wilson Clark passed away on August 6, 2019 at the age of 95. He was married to his wife Margaret Custis Archer Clark, for 62 years. He is survived by his three daughters, Margaret Custis Clark, Susan Clark Randaccio, Archer Griffith, his brother, John Hunter Clark, 92 and his five grandchildren, Ted and Casey Trozinski, and James, Lauren, and Alexander Randaccio. His integrity and his commitment to service and to the nation were an inspiration to many and he will be deeply missed. A memorial celebration of his life will be held in Princeton N.J. on December 21, at 1:00 pm at Nassau Presbyterian Church.

Jim Clark was born in Cleveland, Ohio on December 21, 1923 the oldest of three boys. He attended Oberlin College, where his college career was interrupted by the U.S. entry into World War II. Eager to enlist, he joined the U.S Army Infantry, first serving in the U.S. training troops, and later in combat in France and Germany. As part of Patton’s 3rd Army, Company I, 319th Infantry Regiment, 80th Division, he moved through France and into Germany in the spring of 1945 as part of the Rhineland and Central Europe Campaigns, liberating Buchenwald, and pushing toward Berlin.  On April 13, 1945 while securing a bridge in Gera, Germany, he was wounded in the chest and arm. He was awarded a Purple Heart and a Bronze Star. He left his commission as a First Lieutenant, and he returned to Oberlin where he completed his degree in History in 1948. He earned his Master’s in Public Affairs as a member of the first Master’s class at Princeton’s Woodrow Wilson School in 1950, and he moved to Washington D.C. committed to public service, to shaping the life of the nation, and to addressing the challenges of a world he had experienced so personally at a young age.

In a twenty year career serving five U.S. presidents in the Executive Office of the President, Office of Management and Budget, he was responsible for financial management, development and coordination of policy proposals, and administrative oversight for a variety of national priorities. He served for five years as Director of International Programs responsible for all U.S. economic and military programs overseas, including U.S. foreign aid and oversight of the intelligence and national security services.

In 1970, continuing a long career specializing in strategic planning, program review, and management, he was named Director of Strategic Planning and Product Development for Chase Manhattan Bank. While there, he shaped the future of the bank, expanding both international operations, as well as domestic banking services.  He expanded national consumer financial services, launching the bank’s new initiative, Chase Home Mortgage Corp. in 1978. He continued to serve the nation while in the private sector, serving on the Board of the Asia Foundation and as Staff Director of the Murphy Commission, the President’s Commission on the Organization of the Government for the Conduct of Foreign Policy.

In 1982, he returned to Princeton University as Deputy Director at the Princeton Plasma Physics Laboratory where he served for eight years managing administrative operations for the Laboratory.   Following his retirement from the Princeton Plasma Physics Lab, Jim joined Mathtech, Inc as a Senior Associate where he led a team overseeing U.S. AID financed projects in the energy sector in Pakistan.

A firm believer in community service, Jim served the communities where he lived in numerous ways.  In Princeton, he was active in Nassau Presbyterian Church, serving as everything from Sunday School teacher, to program and financial manager. He was a founding member of the Princeton Adult School where he served on the Board and taught several classes.  Committed to the next generation of public servants, Jim also served on the Board of the Robertson Foundation for the Woodrow Wilson School at Princeton for over a decade.

A life of significant accomplishment was marked by a commitment to building personal relationships both close to home and abroad. The cousins and young people who shared our home, the lifelong friends from across the nation and the globe, were a tribute to his spirit. He will be most remembered for the love and joy he brought to his family for his heartfelt appreciation for both the simple and the grand of what this world has to offer.  This appreciation of life’s gifts is his enduring gift to us.

Memorial Contributions may be made in his honor to the following causes which he held dear:

Online: https://makeagift.princeton.edu/MainSite/MakeAGift. (In the “in honor/memory of” box, indicate in the “special instructions and comments field,” gift is for the James W. Clark *50 Memorial Fund.

»(Do not delete this line. It does not print.  Text that is to appear on web must be entered before this line)