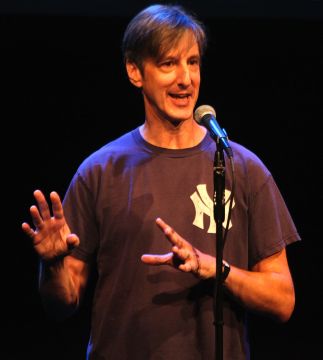 In my family’s world, Thanksgiving’s primary function has less to do with food and more to do with stories.

The angst-provoking attitude about food is a very short story. We have many food issues in our family – gluten free, egg free, nut free, sugar free and vegan. Styrofoam with a low-salt vegetable broth might be the only acceptable food option for everyone’s consumption.

This year our Thanksgiving feast included Post-It notes on each platter of food in order to identify the ingredients.

The highlight of our Thanksgiving Day together is story telling – an art that McCarter Theatre in Princeton is celebrating during its current season.

The Moth, a nonprofit dedicated to the art and craft of storytelling, was launched in 1997. For the past 23 years, The Moth has presented over 35,000 true personal stories, told live, without notes, to standing-room-only audiences. It produces approximately 600 live shows each year and has an ongoing presence in 30 cities worldwide.

According to McCarter’s Special Programming Director Bill Lockwood, Princeton, thanks to McCarter, is joining the ranks of those other cities where The Moth has an ongoing presence. The defining characteristic of these stories is “true,” differentiating them from many of the stories coming out of social media and Washington D.C. these days.

The Moth in Princeton on Nov. 22 had a real hometown touch. Its emcee was Princeton University alumnus (Class of 1987) Jonathan Ames, author of novels and comic memoirs (two of his nine books made into films), creator of two TV shows. He also did a stint as a taxi driver in Princeton, a job that gave him perspective and story-telling practice in front of an audience of unsuspecting passengers.

One of the featured storytellers at The Moth Princeton was the Rev. Dr. Theresa Thames—the associate dean of Religious Life and the Chapel at Princeton University, ordained elder of the United Methodist Church. If her sermons are as amusing and inspiring as her story-telling performance on The Moth Princeton stage, the chapel may be see a real uptick in chapel attendance.

It made perfect story-telling sense to me, when I discovered that The Moth and Andy Borowitz are related. He started being the host to The Moth 20 years ago, when the initiative was just a toddler. Andy Borowitz, the American writer, comedian, satirist, actor, creator of NBC sit-com “The Fresh Prince of Bel-Air,” and satirical columnist of “The Borowitz Report,” performed to a sold-out McCarter Theatre last February and is returning again on Feb. 1. Unlike The Moth stories, however, Andy’s Borowitz Report stories are untrue – real fake news.

In an email interview, Andy explained to me his connection to The Moth.

“I started hosting The Moth 20 years ago. At that time, we were very much an underground experiment, playing in tiny clubs in downtown Manhattan and sometimes drawing audiences of a dozen or so. It’s been very gratifying to see The Moth grow and reach audiences around the world. Artistically (at the risk of using such a pretentious adverb), doing The Moth has helped me grow as a writer and performer. Eleven years ago, I had a medical crisis that veered into a near-death experience — I had a 50% chance of surviving. That doesn’t sound like a very funny story, but my rendition of it at The Moth went viral and then became a book, called ‘An Unexpected Twist,’” Borowitz said.

Even though his columns in “The New Yorker” are marked as untrue with a tag line “Not the News,” some people ignore the warning and believe them as fact.

“The story (told last year on the McCarter stage) was inspired by the revelations early in Trump’s tenure that he was paranoid about Obama eavesdropping on him. My story, which was hardly plausible, involved Trump commanding Kellyanne Conway and others to wrap the White House’s phones with tin foil. The story was widely reported by the Chinese media as real news,” he said.

Being so multi talented as a comedic storyteller, Andy said that he is happiest “when … expressing myself directly to the audience without too many other hands getting involved. For that reason, I prefer onstage performance and writing columns and essays over TV stuff, which requires collaboration with a lot of other people.”

When I read his columns in “The New Yorker,” most of which are focused on the current administration in Washington D.C., I continually marvel over how he comes up with material and keeps it fresh, unlike the rants and stories served at my Thanksgiving dinner.

“I don’t have a fixed process for writing my ‘New Yorker’ columns. I don’t sit down at a desk and do it. I don’t pore over news sites looking for ideas. I just go about my life and in the course of the day ideas will generally occur to me. 95% of the work is coming up with the headline. Once I have that, writing the column doesn’t usually take more than 15 minutes or so. All of the work is front-loaded — it goes into coming up with the headline joke, which dictates the rest of the piece. The columns are usually fewer than 200 words, so if I spent all day writing that then I would be doing something terribly wrong,” he said.

He attributed his success as a satirist and comedian to no one paying much attention to him as a kid.

“I was the youngest in my family and by the time I came around my parents were kind of tired of being parents. So I was left to my own devices, which meant drawing comic books, making super-8 movies, playing music and doing theater. In my case, all of that parental neglect worked out,” he said.

My kids who each have three kids were very happy to learn about the positive effects of parental neglect. They also were happy that my contributions to the meal were several Andy Borowitz columns, containing none of the offending foods. The columns were, however, very rich in humor – an ingredient for which I am profoundly thankful these days.

For information about the Feb. 1, Andy Borowitz performance, visit www.mccarter.org.