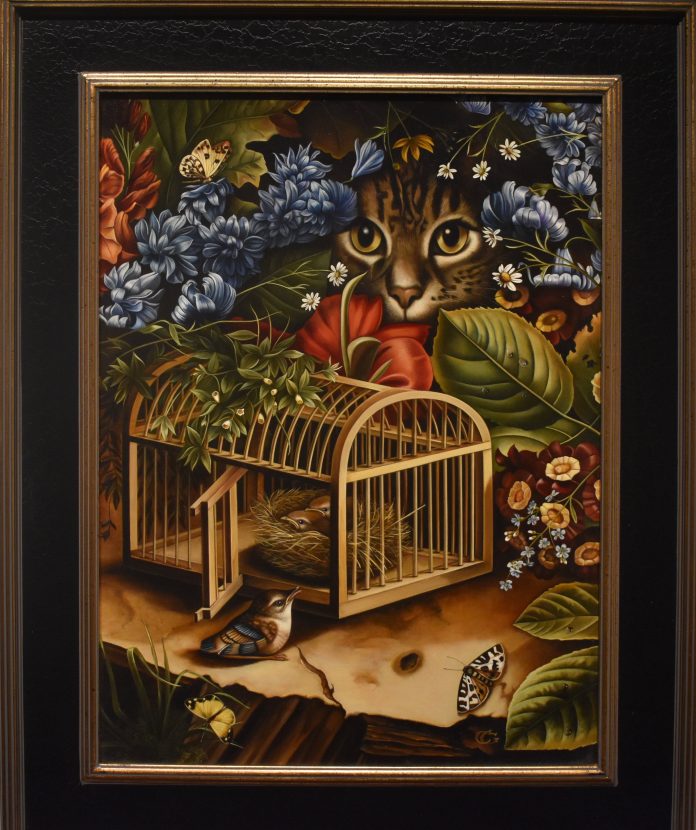 Donna Kessinger, the executive director of the Monmouth Museum, was determined to make the 2019 holiday exhibition “over the top.”

But not the kind of “over the top” Kessinger observed in December 2018 when the holiday exhibition theme was “food” and plastic fruit was strung on the museum’s Christmas tree.

This year, Kessinger believed a cute animal theme would suffice.

“Petopia!,” an exhibit which features almost 100 aesthetically varied portraits of pets, is on display at the Monmouth Museum on the campus of Brookdale Community College in Lincroft through Jan. 5.

The exhibit celebrates the unique bond humans have with their furry companions.

The exhibit, which features portraits of cats, dogs, rabbits and cattle, spotlights local and international artists who were selected through a juried submission process. The works, which are available for purchase, are priced from $50 to $11,799.

“Why not raise the level of art to a subject everyone can get into? … We needed to make the exhibition cute and endearing to our members,” Kessinger said in an interview.

Each year, she said, the Friends of the Monmouth Museum – a group of volunteers – decorates a Christmas tree to imitate the holiday exhibition theme. This year the Friends adorned a large Christmas tree with Beanie Babies, stuffed animals and framed photographs of animals.

“Petopia!” is complemented by the museum’s annual model train display. Portraits of pets that surround a bustling model train diorama contribute to the child-like enchantment of the holidays.

Laura Oncea, public relations director, said each portrait in the exhibition expresses the unique way unconditional love is conveyed by a human toward their pet.

“The way (the artists) create their (pet’s) face, I feel like there is an emotion that comes out when you look at the face they create,” Oncea said as she complimented a portrait of a dog, “My Sadie” which was created by artist Heather Lynn Gibson.

An example of unconditional love toward a pet also appears in Stacy Pritchard’s work “A Very Very Good Girl.” The artist painted two black and white artistic renditions of her beloved dog.

The first of two images features the words “a very very good girl” around the canine’s physique, which is accompanied by a halo-like silhouette. A pink heart-shaped tongue serves as the work’s focal point.

In the second image of the canine, the dog’s pupils are replaced with pink hearts.

In her artist’s statement, Pritchard said, ” ‘A Very Very Good Girl’ is an original hand-painted woodcut of my little black dog Ruby. Ruby came into my life the year after Hurricane Sandy. My dog was heartsick for a companion after our neighbor and his dog friend were forced to move away.

“So the next spring I started to search for a second dog. I found Ruby from a rescue group. When she first came home to us, she was scared of literally everything and had had no socialization with people. She had a big attitude and would nip and ask questions later.

“The vets believe she is much older than we were originally told, which makes us just want to love her more. She has had some medical issues in the past and has pulled through like the fighter she is. She recently got an infected eye and had to have surgery.

“While she underwent surgery, I sat at home and worked on these woodcuts. It allowed me to occupy my mind and hands while waiting to hear she was OK. She is OK. As a matter of fact … she is A Very Very Good Girl,” Pritchard wrote.

Not all of the artists in the exhibition have imitated their pets. Artist Marjan Morravej’s work “Extinct Animals-Caspian Tiger” features a large watercolor tiger painted on a broken mirror. The portrait is priced at $11,799.

According to an artist’s statement, Morravej said, “the artwork depicts the role of humans in shattering the circle of life.”